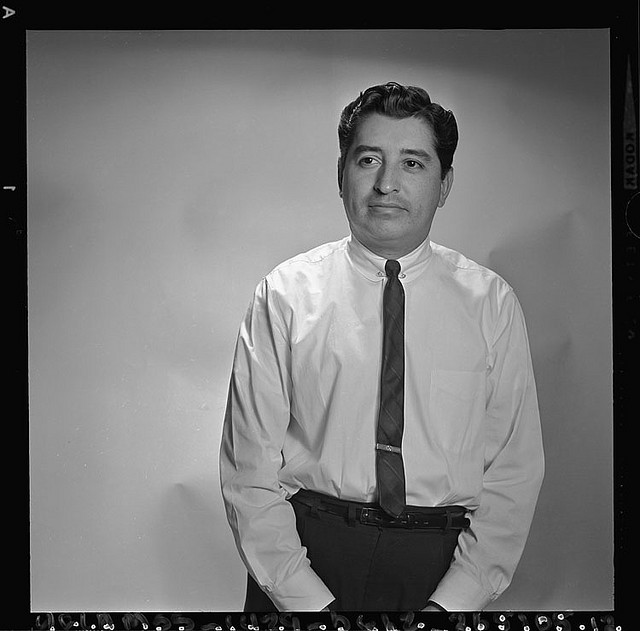 Forty-two years ago, on Aug. 29, 1970, more than 20,000 demonstrators, most of them Chicanos, held a march through East Los Angeles in protest of the Vietnam War and the disproportionate number of Mexican Americans being drafted and killed in the conflict.

It was a culminating moment for the Chicano Movement, which for the last two years, had been staging demonstrations calling attention to inequities affecting the Mexican American community. For example, in March, 1968, thousands of students had walked out of their classrooms at Lincoln, Roosevelt, Garfield, Wilson and other high schools in protest of conditions that they argued led to an alarming dropout rate.

The 1970 march was a moment of both cultural and political pride for the demonstrators, which included young people and entire families with nanas and niños along. The crowd gathered at Laguna Park, where speakers and musical groups took turns on the stage.

Reporting the events of that day were journalists from throughout Los Angeles, including KMEX news director Ruben Salazar, who was well known for his independent voice as a columnist for the Los Angeles Times.

Suddenly, the rally at Laguna Park turned ugly. Sheriff’s deputies later reported that young men had gone into a store and had been stealing beer and cold drinks. When deputies arrived, the authorities said, they were hit by stones and bricks. The deputies, backed by Los Angeles police, fired tear gas and quickly began to clear the park. Families suddenly had to run in panic from officers firing tear gas and clubbing demonstrators who stood in the way. The authorities had clearly overreacted, protest leaders would say later.

Salazar and his KMEX colleagues moved to a spot on Whittier Boulevard far removed from the immediate scene, where young people had begun to break shop windows and to stage a full-scale riot. In the late afternoon, Salazar went into a bar called the Silver Dollar to use the restroom and get a cold drink. While he was there, a Sheriff’s deputy fired tear-gas projectiles into the building. One of them struck Salazar in the head and killed him.

The rocket-like tear-gas projectiles had been designed to pierce walls to oust barricaded suspects. But the door to the Silver Dollar was open at the time. The full circumstances of Salazar’s death have never been fully explained. The deputy who had fired the fatal projectile was not charged with any crime.

Salazar became a hero to many Mexican Americans in Los Angeles. Community members had lost both a committed journalist who was reporting to them in Spanish via KMEX and an advocate who, in his L.A. Times columns, was not afraid to challenge the powers then in charge of Los Angeles. Many schools and libraries and even Laguna Park were named in Salazar’s honor.

Salazar received national recognition in April of 2008 when a commemorative stamp was issued by the U.S. Postal Service in his honor. The Salazar stamp was part of a block of five that honored “American Journalists.”

Frank Sotomayor, who had been a longtime editor of the Los Angeles Times and serves as an adjunct faculty member at the USC Annenberg School of Journalism, spoke about Salazar and his legacy at the stamps’ unveiling in Washington, D.C.

As a way to honor Salazar and remember the events of that day 42 years ago, we present this text of Sotomayor’s remarks:

Today we honor Ruben Salazar as a journalism trailblazer and as an important voice in American history.

His legacy still burns strongly among countless journalists, educators and public servants who were inspired by his words.

Salazar will always be known as “the first” in many respects. Born in Mexico, he grew up in the West Texas town of El Paso, where he began his journalism career. After working in Northern California, he joined the Los Angeles Times in 1959, later becoming its first Mexican American foreign correspondent, reporting from the Dominican Republic, the Vietnam War and Mexico.

When Salazar returned from Mexico to L.A, he found a vastly changed political scene. During those turbulent 1960s, the Chicano movement had erupted, and activists were challenging a system they considered unjust.

Salazar had always considered himself a reporter and observer, not an advocate. But as he reported on the evolution of Mexican Americans, he began evolving himself.

He started writing a column that gave him leeway to publish his opinions — and he continued to write the Times column when he moved to KMEX, a Spanish-language TV station, as news director.

In this 21st century, as we know, Mexican Americans and other Latinos hold important political and corporate positions and Latinos are the nation’s largest population of color. Things were different in the 1960s. Mexican Americans in L.A. were politically powerless ”“ without a single City Council member or a single county supervisor. Some Mexican Americans were victims of housing covenants that restricted where they could live or of school counselors who discouraged them from going to college.

Examining these conditions, Salazar delivered one hard-hitting commentary after another.

In early 1970, he stated, “Mexican Americans, though indigenous to the Southwest, are on the lowest rung scholastically, economically, socially and politically. Chicanos feel cheated. They want to effect change. Now.”

Salazar was tough on L.A.’s law enforcement officers when he found they were out of line. He rebuked a judge for using racist language. He skewered people who looked down on Spanish while touting the value of foreign languages. And he did not shy away from coming down on Chicano activists either.

His columns caught my attention in faraway Japan while I was in the Army. Like other Mexican Americans, I felt Salazar spoke for us, that he reflected what was in our hearts””even if we did not necessarily agree with each of his positions.

I applied to the Times and hoped to meet Salazar. I was excited as I left the Army on August 29th, 1970. Unbeknown to me, Salazar was killed on that same day in East Los Angeles while he was on assignment, covering a giant Chicano antiwar protest that turned ugly.

For reasons that are still impossible to comprehend, a Sheriff’s deputy fired a tear-gas projectile into a small bar where Salazar had stopped with a colleague. The projectile struck Salazar in the head, killing him.

In a eulogy to Salazar, then-Times publisher, Otis Chandler, said:

“He had a keen sense of perspective and introspection in explaining”¦the hopes, the dignity and the bitter frustration of the minority population, particularly the very large and neglected Mexican American community ”“ a community the Times had largely overlooked until Ruben made us aware of this fact.”

As I began work at the Times a month later, I realized that there were very few Latino journalism role models. Salazar became an inspiration to me, to my colleague Frank del Olmo and to a generation of other Latinos.

Wanting to create something meaningful after his death, we formed the California Chicano News Media Association. Our goal was to encourage young Latinos to enter the media and to improve news coverage. CCNMA presents the Salazar journalism awards each year. And the National Association of Hispanic Journalists, working to increase newsroom diversity, awards Salazar scholarships annually to college students.

While Salazar will always be remembered as an advocate for Mexican Americans, I see his work in a broader context, as advocating for the best values of American democracy: fairness, justice, equality.

Today has been proclaimed Ruben Salazar Day in Los Angeles and the L.A. Times will host a celebration in honor of the Salazar stamp. Guests of honor will be Salazar’s two daughters, one son and seven grandchildren.

Also to be acknowledged there is Olga Briseño, director of the Media, Democracy & Policy Initiative at the University of Arizona. We are thankful to Olga for gathering letters and petitions from 13 hundred individuals and groups — to bring Salazar’s legacy to the attention of the Postal Service.

Finally, I want to thank the U.S. Postal Service for issuing these stamps. Originally, they were to be 41-cent stamps. But, in line with the upcoming postal rate hike, the stamps will be 42 centers.
This is one rate increase I totally support.

You see, Salazar was 42 years old when he was killed. And as his daughter, Lisa Salazar Johnson, told me: the 42 on the stamp will always remind her of his love and accomplishments during 42 years of life.

The struggle continues to gain the documents that would shed light on the Salazar case. Read more in MALDEF Files Lawsuit Against Sheriff Baca for Refusal to Release Records in Ruben Salazar Case.

Latino journalists remember the life and legacy of Ruben Salazar on the 40th anniversary of his death. Read more in Slain Latino Journalist Rubén Salazar, Killed 40 Years Ago in Police Attack, Remembered as Champion of Chicano Rights.