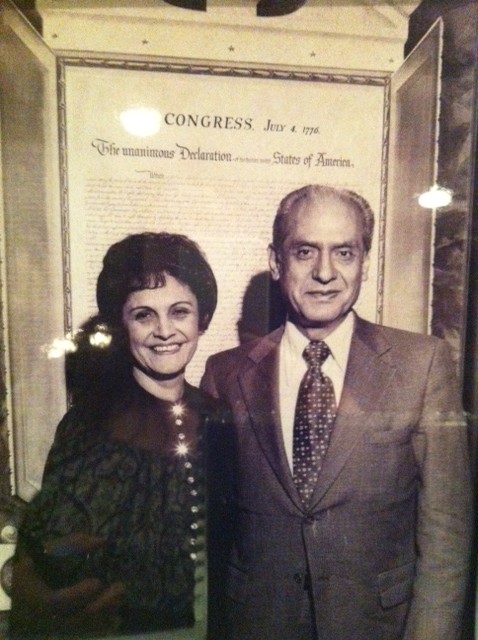 Palm trees against the downtown LA skyline served as the backdrop at the funeral ceremony of long-time political activist and Boyle Heights native Lucille Beserra Roybal on Friday, Jan. 4.

Beserra Roybal died in her sleep on Dec. 23, 2012. The January ceremony was a celebration of life honoring a woman who was an inspiration to the people of Boyle Heights, but in particular, to generations of women who grew up on the Eastside of Los Angeles.

She was born in Los Angeles in 1917 with a family history that included Californios- people of Spanish descent who were born in California during its colonial period. She was raised in Boyle Heights by a family who valued education and justice for all, and was a graduate of Roosevelt High School.

It might be hard for many Latinas today to imagine what life was like in 1930’s Los Angeles for a young Mexican American woman. Going to high school was a luxury that was beyond the means of many people. The depression era was a time when people of Mexican heritage were repatriated back to Mexico on trains leaving out of Union Station. But Lucille was a trailblazer who helped the Eastside community establish its political power with organizations that are still active today such as the Mexican American Political Association (MAPA), the National Association of Latino Elected Officials (NALEO), and the Community Service Organization (CSO).

In 1947 she served as the first Latina Registrar of Voters in Los Angeles and led a Get Out the Vote campaign that registered 12,000 new voters in East Los Angeles. This effort led to the election of the first Latino to serve on the Los Angeles City Council. And that was just the beginning because for the rest of her life she dedicated her time, energy, and leadership to civic and community work that made life better for all the people of Los Angeles and the nation.

She was the wife of the beloved Edward R. Roybal, the first Latino to represent the community as a Los Angeles City Councilman, then as a United States Congressman. As important as the community was so was being a mother to her three children. She raised them with her passion and values and they have all become successful in their own right. Her eldest daughter, Lucille Roybal-Allard, followed in her father’s footsteps and is the current U.S. Congresswoman representing areas of the Eastside and Downtown.

Today you can hardly visit a public building on the Eastside or Downtown without seeing the Roybal name: the Roybal Learning Center high school, the Roybal Federal Building and Courthouse, the Roybal Comprehensive Health Center, and even the Roybal Metro Gold Line eastside extension. This is a testament to the work of Congressman Roybal as well as the woman who was by his side for 65 years.

Lucille Beserra Roybal, the ‘First Lady of Boyle Heights,’ reminds us of the beautifully rich spirit of love, hard work, and commitment to family and community that has made Boyle Heights a place of inspiration for generations of leaders, artists, and people making a difference at home and in the world.