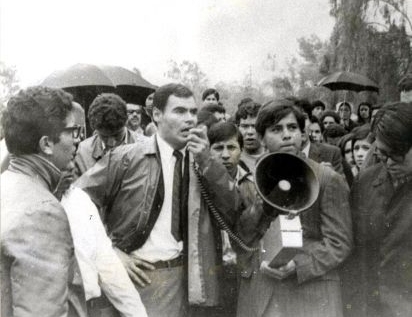 In 1968, Lincoln High School teacher Sal Castro was arrested and charged for allegedly guiding the East L.A. Chicano “blowouts,” when more than 1,000 students walked out of their classrooms to protest inequalities in educational opportunities for Latinos. The charges were later dropped.

Since then, Castro’s work as a civil rights leader and educator for over 40 years has encouraged several changes in the academic system, including bilingual education and ethnic studies. Today he is hailed as a courageous leader in the Chicano movement.

Castro died in his sleep Monday after a battle with thyroid cancer. He was 79.

Below is a reflection from Joe Rodriguez, Garfield High School class of 1970, and staff writer for the San Jose Mercury News.

I was not one of the walk-out leaders and never met Sal Castro, but the walkouts were one of the seminal events in my political awakening to educational inequality and racial discrimination.

I was only 15 and new to Garfield, which was a three-year school then. I remember sitting in biology class when I heard students shouting “Walk out, Walk out!” and spilling out onto the lawn in front of the school. I asked my teacher for permission to go down and find out what was going on. I didn’t realize it at the time, but the journalist in me was emerging, too. To my surprise, my teacher let me go see what was happening.

That was a long day and week. As the crowd of students grew, sheriff’s deputies arrived and lined up on the street facing the students on the lawn. Pretty soon, the Brown Berets showed up, which annoyed me because I thought they were looking for a fight with the cops more than participating in a protest against lousy education.

I was young but not that naÃ¯ve. By then I knew that Gandhi and Martin Luther King’s preference for non-violent protest succeeded where violence failed, as with the Watts Riot in south Los Angeles in 1965.

Then I heard Los Angeles Mayor Sam Yorty on the radio blaming communists for corrupting us. That annoyed me even more. I don’t remember much violence at the Garfield walk out, but I did see some students throwing a few rocks and deputies pushing back too hard, as if itching for an excuse to attack with their billy clubs.

We had to grow up fast after the walkouts. I had wished for high school to be fun, three years of teen bliss, optimism and college prep in a warm cocoon. The world came crashing down on us instead. The walkouts started my worst year ever, 1968, and were followed by the assassinations of my heroes, Bobby Kennedy and Martin Luther King, the Tet Offensive and more race and anti-war riots than I can remember.

More than any other year, it shaped the political and social values that guide my work today as a journalist, and it all started with the East Los Angeles walk-outs.

*The family requests donations to the Sal Castro Foundation in lieu of flowers.