We have all heard it: a traditional Thanksgiving dinner. But what does that mean exactly?

For many, it’s a turkey and all the dressings. But in Latino households, it can be a little different. From tamales to pozole, buñuelos and even chicken; it can vary from home to home.

As a first generation Mexican American, I remember our Thanksgiving dinners being more “American” when I was a child. It could have been because my parents and family felt as if they needed to assimilate to American traditions. And what better opportunity that the all American Thanksgiving dinner?

Our holiday went a little something like this: everyone would come over, and even though we didn’t fit in the small studio apartment, four to five aunts and uncles would show up with a soccer team full of kids.

Although we adopted the turkey, mashed potatoes and ham dinner, little by little the food on the table turned to whatever we liked to eat. Our Thanksgiving dinners became a mix of tamales, chicken, mashed potatoes and gravy, and of course, the pan dulce and cafe de la olla never failed to make an appearance; Sometimes even pozole was a good alternative.

Perhaps we all felt we didn’t need to be anyone but ourselves.
The tradition really boils down to spending time with family regardless of the food that is set on the table.

Sharing a meal with loved ones– something we organically do to survive– is a great way to connect. Handing someone the biscuits doesn’t mean more, if those biscuits are actually tamales or pan dulce, does it?

In recent years, the turkey hasn’t even made an appearance on our dinner table. But I do have to say that my mom’s version of stuffing is the best. It could be that your own mother’s cooking is always the best. She completely made this recipe up and, in my opinion, has perfected it. 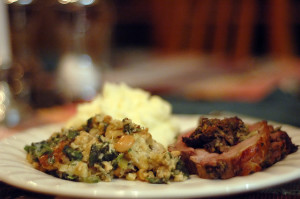 Recipe for my Mom’s Best Stuffing