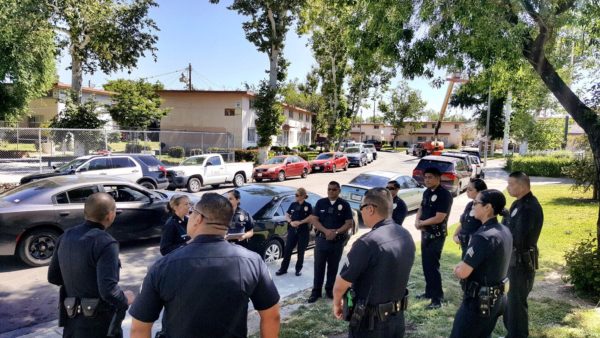 Police are asking for the public’s help in providing information that would lead to the identification and arrest of the suspect responsible for a shooting death early Saturday in the Ramona Gardens housing development.

In a release, the Los Angeles Police Department identified the fatal victim as 32-year-old Joselito Ulloa. A gofundme campaign page started by a person who identifies herself as the victim’s niece shows a picture of a man, a woman and three small children.

According to the release, LAPD Hollenbeck area officers responded to a shooting call at around 3:40 a.m. on Saturday April 29, near the corner of Murchison Street and Lancaster Avenue –the main entrance to the Ramona Gardens development. “When officers arrived,” the release states, “they found four people suffering from gunshot wounds.  Detectives responded to the location and their investigation revealed that an unknown male had approached a group of people, confronted the group and fired multiple gunshots. The suspect was last seen driving away in a dark sedan.”

Police say Paramedics responded to the scene and transported all four victims to area hospitals. Ulloa died of his injuries at the hospital while the other three victims were treated and released.

The suspect –a Hispanic male driving a four-door sedan with tinted windows– is being sought by police.

On Saturday and Sunday, Hollenbeck officers assigned to the Community Safety Partnership (CSP) patrolled the neighborhood and were available to area residents, as seen in photos published on Twitter by Captain Ruby Flores, the division’s commanding officer:

Taking roll call in our #RamonaGardens community in our daily effort to #StopTheViolence. This is YOUR #LAPD. pic.twitter.com/p6v4eR9pt2

The CSP and the Ramona Gardens Resident Advisory Council called for an Emergency Meeting on Wednesday, May 3, to address the neighborhood’s most recent homicide:

CSP & Resident Advisory Council invite u on 5/3 to a Community Mtg at the Boys & Girls Club in Ramona Gardens to discuss a recent homicide pic.twitter.com/r2VXqNeux2

Saturday’s shooting happened at almost the same spot where 23-year-old Jonathan Valdovinos was shot to death on Feb. 26. This is the seventh shooting death so far this year in Boyle Heights, and the second in Ramona Gardens in almost two months.

Anyone with information is urged to contact Hollenbeck Gang Detective Carreón at (323) 342-8998.