The Mason family is now more comfortable living in Ramona Gardens than when they first moved in. Photo by Melissa Martinez.

On Saturday mornings, groups of men play on basketball teams in the Ramona Gardens gymnasium. Some are Latino, from the neighborhood; others are African American, from elsewhere. In many parts of Los Angeles, two races playing together may not seem unusual. But in Ramona Gardens, it represents enormous progress.

For decades, black families were nearly non-existent in the largest public housing project in Los Angeles. Recently, however, African Americans have been moving back into Ramona Gardens.

George Sarabia, 42, a former gang member born and raised in Ramona Gardens, says, “Blacks were not welcomed here because of the history between the blacks and Latinos. It had a lot to do with fear, because we didn’t want them taking over our neighborhood, because this is ours.”

Sarabia has worked as a gang interventionist in the housing development for many years, and police still call on him for help sometimes. He says these views were passed down from generation to generation, without anyone really knowing why.

“It was embedded in me, in my lifestyle. I was racist. That was all I knew,” says Sarabia.

Most residents in this neighborhood, like Sarabia, are Latino. There has been a history of racial tension dating to the 1960s. In 1992, two African American families had their apartments firebombed. Those families and the other remaining African American residents fled or requested transfers.

José Gutiérrez, the assistant manager of the Housing Authority of the City of Los Angeles (HACLA) at Ramona Gardens, confirmed that African American families did not move into the housing project for years. Because the safety problem was widely known, African Americans chose to stay away, he says.

Bad reputation
For many years, Ramona Gardens was known principally for confrontations between the police and its local gang, difficult racial relationships, multiple shootings and a drug trade.

Built in 1941, Ramona Gardens consists of more than 600 apartments in 100 plain, rectangular buildings that resemble Army barracks. While it’s located in Boyle Heights, it’s isolated from the rest of the community by railroad tracks and the San Bernardino Freeway.

For more than 40 years, the gang Big Hazard, with known ties to the Mexican mafia, has claimed Ramona Gardens as its home.

This situation created an unwritten understanding in the neighborhood of who was welcome and who was not. Sarabia says that growing up in Ramona Gardens, one of the rules to live by was that “if you weren’t from Ramona Gardens, then you were basically an enemy of Ramona Gardens, and that’s just the way that we were taught.”

Gang members “were taught that you can’t go to the end of the street, you can’t walk on the other side of the freeway, you can’t cross the train tracks, no white/black people.”

In the past, some residents say these unwritten rules made them nervous about stepping outside their homes. Esperanza González, 62, has lived in Ramona Gardens for 37 years and raised five children there. She says, “Before, yes, you could not walk around here.” 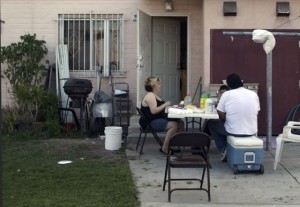 A Ramona Gardens family sets up a dinner outside their home. Photo by Jonathan Olivares

Reduced violence
Recently, there has been far less violence in Ramona Gardens. A gang injunction that restricts the behavior of gang members was put into place seven years ago. The Housing Authority and the Los Angeles Police Department (LAPD) are working together to make the community safer; grant-funded community programs and nonprofits are also doing their part.

Around five years ago, there were a lot of vacant units in Ramona Gardens, and African American families began moving in. Gutiérrez, of the Housing Authority, says today there is definitely more diversity because “of acceptance and change in the community.”

While racial tensions still exist, they are not as prevalent as before.

Gutiérrez credits the Community Safety Partnership (CSP) officers, who have been in the community for the last two years, with helping to improve the relationship between the residents of public housing communities and the LAPD, as well as reducing racial tensions. CPS is a collaborative program of the Housing Authority, the LAPD and the Mayor’s Office of Gang Intervention and Youth Development.

LAPD Sgt. Ken Edwards has been part of the partnership since its beginning. He says, “There has been almost nothing as far as racial incidents, when compared to the last 10 to 15 years.”

While violence has declined, some behaviors are harder to change. A single African American mother, Shawath Mason, says she has experienced racism. The 32-year-old woman came to live in Ramona Gardens with her children about a year ago to escape her abusive partner.

Soon after moving in, however, she heard stories about blacks being unwelcome. “Black people couldn’t walk over here, come over here; [gang members] would give them warnings,” says Mason.

Mason said it angered her that older children would bully 3-year-old son. “It’s just the color of our skin, but who taught the little kids to pick on the black one?” asks Mason.

Sarabia says that this type of behavior is deep rooted, and change is slow. While working as a gang interventionist, he came to a different understanding about people. Sarabia says he started including teams of other races in the adult basketball league because he “felt compelled to create a change in Ramona Gardens and show people that they could play together.”

Sarabia admits that players don’t hang out after games, but says he hopes that seeing the men play together will promote a different attitude in young people.

Mason says now, after a year of living in Ramona Gardens, things are better for her family. She says she and her son feel more comfortable, and she feels safe enough to take late night walks around the area.

Sarabia says he recently saw an example of change in the community when he saw a black kid and a Latino kid walking down the street hugging each other. “I thought I would never see that,” he says, “a black kid hugging a Latino kid. And those kids are going to grow up and not care what color you are.”