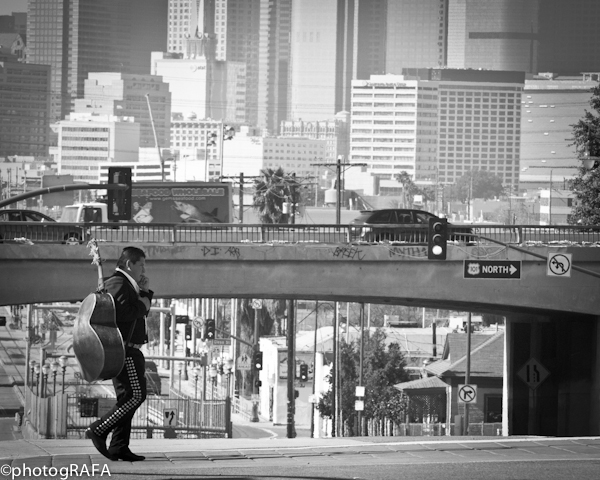 A mariachi walks along Boyle Avenue in Boyle Heights, with the 101 Freeway only a few feet away. Boyle Heights' proximity to freeways, industry, and small polluters like auto repair and tire shops has made air quality one of the worst in the city. Image: Eastsider Writer (www.eastsiderwriter.com)

Being surrounded by three major freeways in Los Angeles, and residences living practically next door to industry, it’s pretty obvious Boyle Heights is not the best place to breathe. A couple weeks ago, KCET’s SoCal Connected aired a story about the air quality in Boyle Heights, showing how closely residents, especially children, live to polluters and what the community is doing to fix the current state of air in the neighborhood.

Associate Producer and former Boyle Heights Beat Youth Mentor Rocio Zamora talked with Eastside Streetsblog this week to elaborate on the story. There was so much we needed to break it into two parts, so the second part will be published tomorrow. In this first part, Zamora talked about how the story changed her perspective not just as a reporter, but also as a Boyle Heights resident.

(ANNOUNCEMENT: The Clean Air Boyle Heights Campaign will be having a meeting today, March 8 from 5:30-7pm at the Mendez Learning Center. Click here for flyer.)

Can you briefly explain what your story was about?

Our story was just basically focusing on air quality in Boyle Heights. I think Boyle Heights is one of those communities where you kind of get hit from by all sides. Boyle Heights, being next door to Vernon, which is very industry heavy, they’re also right near commerce, we having the rail yards, we have the alameda corridor now is kind of near us, and then we have all the smog coming in from the ports, and not to mention we are cut by every major freeway in LA, or most of them. I think Leonardo Vilchis, who’s from Union de Vecinos, called it death by 1000 cuts, which is a good way of putting it.

What first attracted you to this story?

What first attracted me to the story was the freeways. (Boyle Heights is) just surrounded by freeways. It’s one of the few neighborhoods that really, we looked at six schools aren’t even 500 feet away from a freeway. Soto St. Elementary, the elementary I went to, there is a playground, there is a fence, and then there is a freeway. Really there is no barrier between the two.

I think what I learned from this story is that it’s not just these big polluters like the freeways and the industry. It’s these little shops, the little auto body repair shops.

I’ve been living here for over 20 years; I never noticed the auto body shops. I never noticed that there was a lot of them near my house. And when we were doing this story, my producer said, Rocio your house is pretty much exhibit A. You turn around 10 feet this way there is an auto body repair shop, 20 feet the other way there’s a tire shop. So like, it’s all very small polluters, but when you put them all together, if there’s like 20 of them in a very enclosed area, then that starts becoming the problem.

Read more of this and a second part of Q&A at LA.StreetsBlog.org