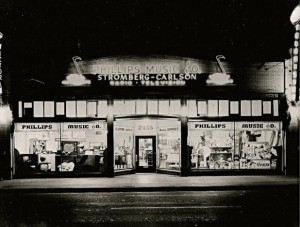 I can’t say it’s a fact, but I’m pretty sure the first time I walked into Phillips Music Company on Brooklyn Avenue, my father held my hand tightly, in fear of my temptation to run off in a store with such expensive equipment.

The place was massive, and for a five-year-old like me, it was a playground””filled with shinny toys too heavy for me to lift and large bass drums perfect for hide and seek.

Eventually I would go there by myself; sometimes to make payments for my Dad’s layaway items: a bass and an amplifier, and later to accompany my sister who bought reeds for her middle school saxophone-playing days. I never bought anything myself, at least not until after the music store closed and made way for one of the many discount stores on the avenue.

This month, author, music critic, and USC professor Josh Kun will be presenting a project dedicated to the musical and cultural legacy of Boyle Heights through the story of the Phillips Music Company. The project includes a

I spoke to Josh about his findings and he explained the double sense of democracy that surrounded Phillips Music Co.

MN: Why Phillips Music Co.? How did this project come about?

JK: I research and teach a lot about cross-cultural exchanges within popular music. In the 90s, I was doing some research about these fairly obscure Jewish American performers who were starting to dabble in various Latin music and Jewish-Mexican exchanges and I started to hear references to this store in Boyle Heights. It sort of took on this mythical quality like it was this magic place in this magical neighborhood of Boyle Heights where people would share styles and share tastes and Mexican musicians would listen to Jewish music and Japanese Americans would listen to Mexican music”¦etc.
I ended up meeting one of the sons of the late owner, Bill Phillips, and I told him my general interests. The family started sharing their stories with me, and one day, on a total whim I guess, I made the mistake of saying, “Wouldn’t it be great if we brought the store back to life for one night?” And of course on Aug. 27, we’re doing it.

MN: I actually visited the store as a kid. My dad would go often because he was a musician and so I have a few memories of the place. For those who aren’t familiar with Phillips Music Company, from your research, how do people describe it?

JK: The most common thing that everyone says is that they were never asked to leave. Everyone talks about how they would go in and usually wouldn’t have enough money to buy anything but they were never asked to leave. They would pick up instruments or pick up records and just hang out, look at stuff and listen. They could go in the back room and listen to bands rehearse or try out instruments. That shows that it was a true neighborhood place and everyone was always invited in.

MN: Referring to the title of this Thursday’s event, how does “democracy” help describe the early culture and music of Boyle Heights?

JK: The store is one kind of emblematic site when thinking about the history of Boyle Heights. Certainly Boyle Heights has been held up by many scholars and political scientists, especially in the formative years from the 1920s to the 1970s, as this model of multiracial, multicultural democratic L.A.”” kind of proof that L.A. could pull it off it wanted to.

When Grand Performances was putting this together, they asked, “What does music has to do with democracy?” My first reaction was: Music is inherently a democratic act. If someone is a dictator then, the band doesn’t work; you have to learn how to listen. In order to play as a musician, you have to first listen to somebody else to know when to come in and I think that at the core of a functioning democracy, are citizens who listen to each other. There’s a kind of inherently democratic aesthetic and nature to performance itself; so for me, that a music store would be a model for a democratic way of life, in a neighborhood that itself was embodying a model of urban democracy, that was just too much to pass up.

MN: What were some of the early artists/bands active in Boyle Heights that perhaps visited the store?

JK: The first star to get famous out of Boyle Heights I think is Andy Russell, who was a big Mexican American pop star. He was seens as a heartthrob in the 40s. He was a good friend of Bill Phillips and was also a regular at the Phillips music store.

Often not thought of as Boyle Heights, but raised in Boyle Heights, is Norman Granz. He was arguably one of the most important jazz producers and promoters of the 20th century. He was Jewish American and he led the fight against segregation within jazz in the U.S. In the 1940s he organized big important concerts at the L.A. Philharmonic Auditorium, the first of which raised funds for the “Sleepy Lagoon” case all surrounded by the Zoot Suit Riots and he was very politically in Mexican American rights.

Fairly legendary figures in Mexican American music like Chico Sesma would go [to Phillips Music store] who later became a popular deejay. Paul Lopez was a major player in the Eastside big band jazz scene; he was a regular there. Much later the Los Lobos guys would always come through the store. Rudy Medina from The Brat shopped there a lot”¦ tons of mariachi groups would buy instruments there, [Bill Phillips] also sold to the Roosevelt High School marching band.

MN: Can you talk about musical identity on the Eastside? Do you see any patterns, whether through sound or message throughout the various eras?

JK: One of the patterns stylistically or aesthetically is the kind of translation and transformation. If you look at the music movement by Mexican Americans in East L.A. since the 1940s, it’s music that’s based on a constant juggling of styles, but it’s also locally based. There’s a sense of using music to understand its identity to a local place, a local region. In terms of lyrics”¦ certainly in the 60s, the level of political consciousness in pop music in East L.A. became very important, but I don’t think it’s been the only lyrical strain. If you look back at the main thing that’s run through here is that East L.A. has given us some of the best love songs ever written. Part of the tradition here, for me, is hybridity. One of the great traditional music styles of East L.A. is R&B with African American music transformed by Mexican Americans. What’s the traditional music of lowriders? Oldies, in most part by African American singers and musicians. And East L.A.’s been the capital or mecca in California for forwarding that kind of music.
There’s a long legacy of punk and rock, but especially punk in East L.A.”” it’s been out of too many history books as far as I’m concerned. Seeing how much of the neighborhood has always had this sense of an East L.A. sound and that there’s a music identity to East L.A., that’s really important.

Visit the Phillips Music Co. website for more on the project