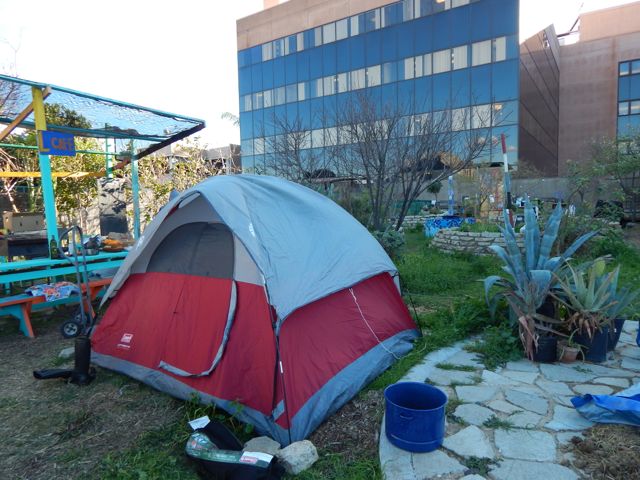 Proyecto Jardín is refusing to vacate the garden it operates on land owned by White Memorial Medical Center, even though the landlord asked the nonprofit group to abandon the space by Sunday. 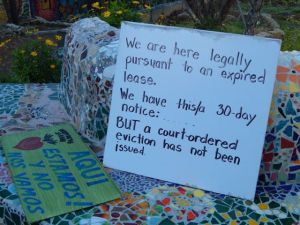 A sign on the grounds of Proyecto Jardín on Monday.

Members of the urban farming collective are sleeping in tents set up in the garden on Bridge Street and say they will stay there until they receive a court-ordered eviction.

“[Boyle Heights] residents continue to occupy and operate the garden legally and cannot be evicted without a court order,” the group said in a press release on Monday.

A spokesperson for White Memorial said she could not comment on the content of the release, since she had not seen the document, but denied that the hospital had attempted an eviction of the garden early Monday, as alleged by Proyecto Jardín. 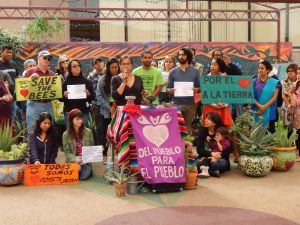 A community gathering held on Saturday.

On Saturday –a day before it was supposed to vacate the garden– Proyecto Jardín held a community forum to seek support from area residents and come up with a strategy to remain on the garden. According to Monday’s release, a coalition was formed with 10 other organizations to urge White Memorial “to keep the garden open and commit to negotiating a resolution that works for all parties.”

Photo above: One of the tents used by volunteers sleeping on the grounds of Proyecto Jardín. All photos by Antonio Mejías-Rentas.