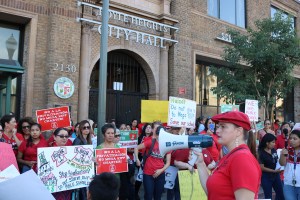 Dozens of people rallied in Mariachi Plaza last week to protest the construction of a charter school in Boyle Heights, an action that organizers see as part of a long-running battle with gentrification in the area.

The rally on Oct. 25 was led by the labor rights group United Teachers of Los Angeles and community organizer Centro CSO, which have appealed to the city’s Planning and Land Use Management (PLUM) committee to halt the plans for the new school.

Marisol Márquez, an organizer for Centro CSO, said residents are concerned that students from other public schools will be “poached” to attend the new school — KIPP Promesa Prep, which will have space for 625 students. Márquez said this would lead to layoffs, lower funding and fewer students at other local schools. 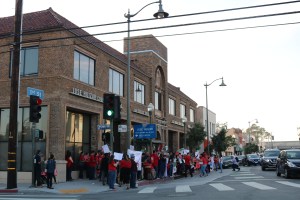 KIPP Promesa Prep, which would serve grades K-4 and is currently slated to open in July of next year, would be constructed on the site of the former Promise Hospital, on Soto Street one block east of Roosevelt High School. The school has been operating at two temporary sites in Boyle Heights since 2015.

The new campus is part of KIPP LA Schools, a nonprofit organization that runs 15 public charter schools around the city, according to the KIPP website. Charter schools are publicly funded and open-enrollment but are not directly run by the Los Angeles Unified School District, though it oversees their administration.

Márquez connected the new construction with other changes in Boyle Heights that have taken place in recent years, including higher rents and increased evictions due to an influx of new residents. 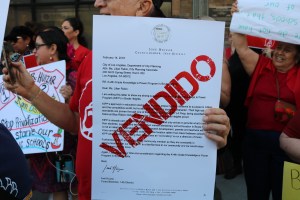 “We feel having a KIPP charter school ushers in gentrification even more,” Márquez said.

Manny Aceves, chief external impact officer for KIPP LA, said in a statement that the school’s students and families are “concentrated in the Boyle Heights area” and that he expects the new campus will continue to reflect the demographics of the area.

“KIPP Promesa Prep provides more school choice to the families of Boyle Heights, not less, and we are excited to continue delivering on the ‘promise’ in our name that a quality education starting in elementary school will lead to bright futures for our Boyle Heights students,” Aceves said in the statement.

At the rally last week, protesters marched to the office of Los Angeles City Councilman José Huízar, whose district includes Boyle Heights, and staged a sit-in to try to convince him to pull his support for the KIPP charter school.

“We’re not hopeful he is going to change his mind,” Márquez said. “But we’re trying to stall them as much as possible.” 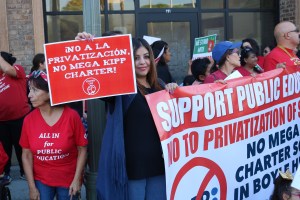 Marquez said that although Huízar was not at his office during the rally, his staff held an emergency meeting on how to address the protesters’ concerns.

“The education of the students in our communities is very important to me,” Huízar said in the statement. In the case of the KIPP Charter School project, I will review it and consider all sides and perspectives when it gets to the Planning & Land Use Management Committee.”

The PLUM Committee will consider the KIPP Promesa Prep construction at its meeting on Nov. 6.

This story has been updated to include a statement from KIPP LA.