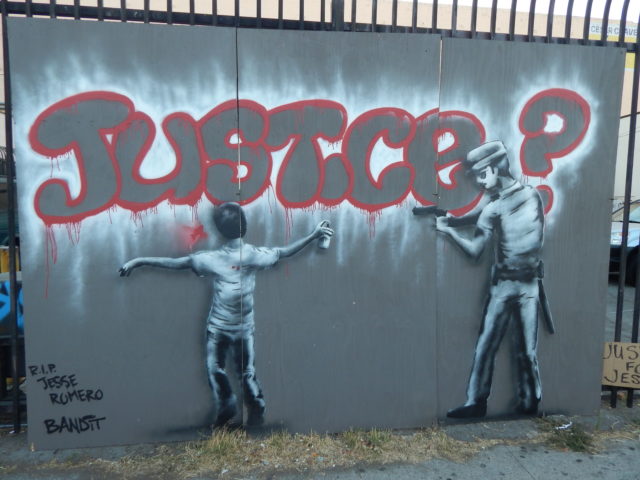 Prosecutors will not charge criminal charges against the police officer who shot and killed 14-year-old Jesse Romero in the most controversial of several fatal officer-involved shootings in Boyle Heights in 2016.

Media outlets reported that Los Angeles County prosecutors explained their decision in an 11-page memo released Monday, saying that officer Eden Medina believed the boy posed a deadly threat and used “reasonable force” to defend himself and other officers. Teresa Domínguez holds a picture of son Jesse Romero at an Oct. 2016 rally.

Medina was one of several Los Angeles Police Department officers assigned to the Hollenbeck division who, on August 9, 2016 responded to a call about gang-related vandalism on César E. Chávez Avenue. The officers pursued Romero to a spot on Breed Street where he was shot.

Police say that they heard a gunshot before they fired at Romero. A gun was recovered at the scene. Despite conflicting reports from witnesses –one reportedly saw Romero fire while another saw the  boy pull a gun out and throw it against a wrought iron fence– the Los Angeles Police Commission ruled in June that the shooting was justified. A makeshift memorial for Jesse Romero near the spot where he was shot and killed. Photo by Art Torres.

Also in June, the teen’s family filed a federal wrongful death suit against Medina and the city. The officer had shot and killed a man in Boyle Heights 12 days prior to shooting Romero.  Medina is no longer at Hollenbeck and the Los Angeles Times reported that he is now assigned to Olympic division.

Hollenbeck officers were involved in six fatal shootings in 2016, the highest of any LAPD division that year. Five of them happened in Boyle Heights; all of the killed were Latino males, including two minors.

In February 6, 2016, officers shot and killed 16-year-old José Méndez during a traffic stop.

Since the 2016 shootings, community activists have protested what they deem as District Attorney Jackie Lacey’s failure to file charges against officers involved in fatal shootings.

Photo above: a mural painted at the spot on Breed Street where Jesse Romero was shot in August of 2016.