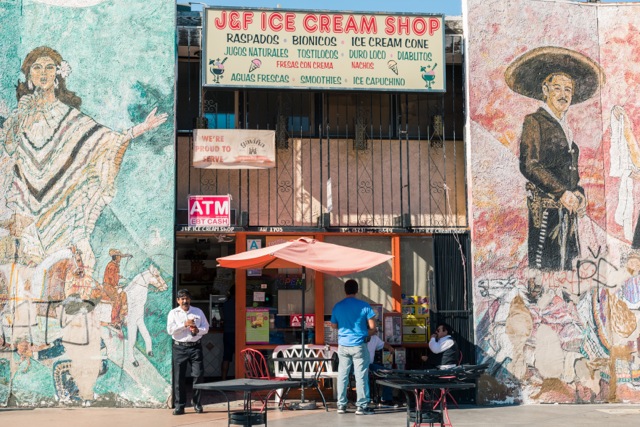 A 24,000 square feet piece of property that includes three popular Mariachi Plaza storefronts and a beloved Boyle Heights mural is being offered for sale with an asking price of $6.2 million, Streetsblog and Curbed LA reported this week. The property –which includes the building that houses J&F Ice Cream, the Santa Cecilia restaurant and the Libros Schmibros lending library– has been listed on Loopnet since March.

The property is listed by investment brokerage firm Hudson Partners and is described as a “rare transit oriented development opportunity adjacent to the Mariachi Plaza Gold Line stop in Boyle Heights [and] adjacent to Downtown Los Angeles.”

Although Metro would have no control over development on the property offered for sale, the broker notes that agency guidelines would provide incentives for high-density affordable housing. It adds that there is “strong support by the council members for a dense project [there], given it’s contiguous to the metro station.” Highlighted area shows the property being sold. Screenshot from listing by Hudson Partners.

The property formed by three adjacent parcels also includes a parking lot behind the building and a house on Boyle Street, but not the actual Mariachi Plaza –with its iconic kiosko and bandstand– which is owned by Metro.

Last month, Boyle Heights Beat reported that owner Anita Castellanos was selling the property and that the East Los Angeles Community Corporation (ELACC) was working with the business owners to fight displacement.

The buildings were part of a 2014 redevelopment of Mariachi Plaza by Primestor that would have added an eight-story medical office plaza with six floors of parking and some retail. The plan included buying the property with the three storefronts and converting them into a three story commercial building that included a fitness center and food and beverage retail.

Community backlash forced Metro to scrap the 2014 proposal. A new plan that included community input calls for the transit agency to build 40 to 60 units of affordable housing on its 1.08 acre parcel adjacent to the Plaza. The plan also includes 12,000 square feet of commercial space and 2,000 square feet of community space, with a resource center where area mariachi musicians could store their instruments.

Metro is also considering building a park on a smaller parcel it owns across the street, on the corner of Bailey and Pennsylvania.

Photo above: The mural “El Corrido de Ricardo Valdez” by Juan Solís is painted on the building that houses one of the storefronts.