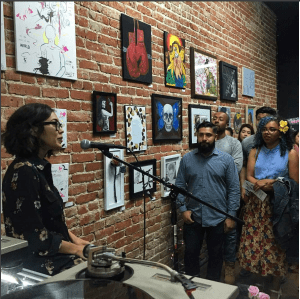 Xica Necia performing at the Use Protection Art Show in Los Angeles in April of 2017.

On October 2016, on a tree-lined street in the Pomona Valley, a crowd of about 50 people gathered in a backyard to see artwork and hear stories shared by local artists. Among the artists performing that night, Xica Necia, an impassioned poet, took the stage to speak her truth:

“… the blood, sweat, tears, and chains that I break daily/ when I write my life down into lines, stanzas, love letters/ reminders to myself/  reasons for being…”

Xica Necia, a Boyle Heights resident who identifies herself as a “queer, femme poet and survivor of sexual violence,” uses poetry and spoken word as a form of healing and spreading awareness about the sexual violence queer people of color (POC) face on a daily basis. In a post on her Facebook page, Xica Necia wrote that “queer POC face alarming rates of violence including sexual assault, yet their stories are hardly represented in media, the courtrooms and our communities.”

According to a 2010 survey by the Centers for Disease Control (CDC),  LGBTQ people face higher rates of poverty, stigma, and marginalization, factors which put them at greater risk for sexual assault. Despite the greater risk, the CDC found that LGBTQ survivors of sexual violence often hesitate to seek help because they experience discrimination due to their identity. To combat that stigma, marginalization, and lack of representation Xica Necia put together a zine titled I’m Still Here. Formed completely by the work of other queer people of color who have survived sexual assault, Xica Necia hopes that this project helps bring awareness to the issue and the powerful ways that survivors have attempted to heal from the trauma. Through social media, she asked for poems, short stories, playlists, artwork, and anything else queer survivors of color wanted to include in the zine. She received about 30 submissions from all around Los Angeles and even some from New York City.

To celebrate the publication, the poet and activist is hosting a Zine Release Party in Montebello on Sunday, April 29. Free and open to the public, the event will include a sexual assault workshop (for survivors only) led by the artist and educator Huixola, art vendors, a pop-up bakery, and an open-mic segment featuring performances by Xica Necia and local poet NikoTiare. This zine and event, as Xica Necia emphasized, is built completely by and for queer survivors of color.

“I felt compelled to start this project because of my own experiences navigating a world that constantly invalidates my trauma. For years I wished that I could find a space where survivors could reach out to each other, and now I have the honor of helping create a space that is for us and by us,” Xica Necia said.

Representation is a key factor in Xica Necia’s motivation for this project. The #metoo movement and the scores of women have come out to bring their attackers to justice have brought sexual violence to the forefront of the national consciousness, but Xica Necia sees something missing from the conversation. “ I don’t intend to speak for the entirety of this project since so many survivors aside from myself have come forward and I cannot fully represent all our experiences, but I personally don’t feel like I can fully identify with the #metoo movement specifically because of my experiences being erased as a queer person of color. While I have deep respect for those who are open about their experiences with abuse, I recognize that being able to break your silence about abuse is a huge privilege,” she said. “It’s a privilege that many queer POC do not have as the risk of being outed can put one’s life in danger.”

To fund the production of the zine and release event, Xica Necia created a GoFundMe page where the event became a trending campaign and reached its $1500 goal in 18 days. The money, Xica Necia says, will go towards printing copies of the zine (which will be free at the event), paying for the space to host the event, providing a stipend for the facilitators of the workshop, and providing a stipend to some of the performers.

As a survivor of sexual violence herself, Xica Necia said that putting together the zine and planning the event has been a cathartic experience, and she prioritizes her emotional and mental health: “I recognize that I must honor my healing process above everything and that’s helped me to pace myself. I’m also deeply grateful to my community for being as committed to the project as I am. A huge network of people, from my housemates to strangers, have contributed to this project physically, financially, emotionally, and spiritually,” she said.

Xica Necia is hopeful that the work that she and other queer survivors of color have put in will help the community heal and is grateful for the support she has received.

“The presence of our community has been incredibly strong throughout this process, and I am so excited to have the opportunity to connect with each other in person at our zine release this Sunday.”

Photo above: Xica Necia performing at the University of California, Riverside’s Take Back the Night event on 21 April 2016. All photos from @Xica_Necia Instagram.

Community contributor Marco A. Covarrubias is a lifelong Boyle Heights and Northeast L.A. resident currently working for a community-based organization in Boyle Heights. In 2017, he graduated from California State Polytechnic University, Pomona with a bachelor’s degree in history and a minor in political science.