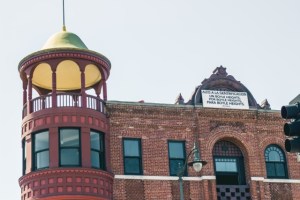 On the outside, non-native Angelenos see Boyle Heights as a cultural war zone where residents are fighting for their lives. Some people might assume that there is a mass of white affluent Angelenos packing their bags from the Westside to the Eastside. Others view that the nearly 100,000 residents of the neighborhood are either fighting against or for the economic forces of gentrification and change. However, the changes in Boyle Heights are less meaningful to most community members.

In reality, the typical Boyle Heights resident does not think about whether they should purchase coffee at Weird Wave Coffee Roasters –the recent target of organized protests and small-time vandalism– or at a Latino-owned business-like Primera Taza; the typical Boyle Heights resident faces systematically racist issues that go deeper than any new coffee shop or art gallery that pops up in the neighborhood.

Both of my parents immigrated from México to Boyle Heights in the late 1960s, and attended Theodore Roosevelt High School in the 1970s, when it was widely considered one of the worst schools in the nation. My mother actually never graduated from high school — she is one of millions of students of color the system failed.

I was born and raised in Boyle Heights, where statistics show that less than 5% of community members have a college degree. I attended Sunrise Elementary School until my parents moved me to a local parochial school because they didn’t want me to be another expected statistic.

Growing up, I didn’t realize that I lived in a low-income neighborhood in what was considered the gang capital of the United States. It was not until I attended the University of Southern California that I learned about the inequities that exist in Boyle Heights. 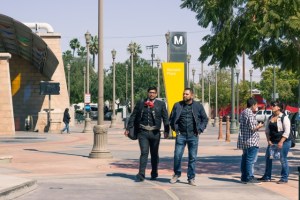 I learned about the beautiful, diverse history of Boyle Heights, but I also learned about the dark side of urban planning in Los Angeles. In fact, many of our disenfranchised families of color were forced to live east of the L.A. river due to restrictive housing covenants as well as other inadequate and unfair housing policies that have perpetuated a cycle of poverty for multiple generations of Latino families.

According to Richard Rothstein, author of The Color of Law: A Forgotten History of How Our Government Segregated America, nearly one in four Latinos receive discrimination from real estate agents or landlords when they are seeking to buy or rent homes. This may help explain why 82% of Latino families in Boyle Heights are renters as opposed to homeowners.

Dr. Sanchez’s course changed my life because it showed me that Boyle Heights was both a beautiful and a forgotten neighborhood. This community has historically been neglected and overlooked by both the City of Los Angeles and the State of California.

In the 1960s, the construction of the East Los Angeles Interchange connected the area’s major freeways, but it also displaced up to 15,000 residents. Those who were able to stay, research shows, are more likely to develop health issues related to asthma, heart attacks, lung cancer, childhood obesity, autism, and dementia.

The Exide Technologies’ Battery Plant located in Vernon produced decades’ worth of lead contamination to nearly 10,000 homes. As an oversight by the city and state to regulate toxic waste, the health of thousands of families was negatively impacted.

In the 1980’s the State of California planned to create a prison near Boyle Heights, but the leadership and resistance of the Mothers of East Los Angeles and former California Assemblywoman Gloria Molina prevented this facility from being developed.

Some people believe that market and economic forces overpower any protest or backlash to gentrification and displacement, but I believe that the resistance in Boyle Heights is symbolic of the activism and advocacy that we have historically seen in our neighborhood. Boyle Heights has the history, the people, and the leadership to develop unconventional and creative policy and programmatic solutions to displacement. 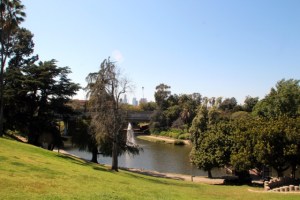 As a future policymaker, I wholeheartedly believe that the most effective, efficient, and equitable policy ideas come straight from the community members who are most affected by displacement and gentrification. The resistance we see today in Boyle Heights stems from our community’s frustration of losing our cultural identity and social capital.

The changes that Angelenos have seen throughout the city have progressed clockwise from Silverlake to Echo Park to Eagle Rock and to Highland Park. Now that more people are moving to the eastside, there is a preconceived notion of the changes that will happen in Boyle Heights.

The core issue of gentrification stems from the fear and reality of displacement. The economic makeup of Boyle Heights is changing, but the racial makeup still reflects the predominantly Latino identity of the neighborhood. In fact, many of the people moving into Boyle Heights are actually Latino residents with a higher income; therefore, the community is slowly becoming more economically diverse.

As Ahrens points in her 2015 research paper “Gentrify? No! Gentefy? Sí!”: Urban Redevelopment and Ethnic Gentrification in Boyle Heights, Los Angeles, the median household income increased from $33,235 in 2008 to $38,801 in 2012, which could be attributed to higher-income Latinos.

As a first-generation college graduate, I returned to my neighborhood after college, and was questioned by some of my peers as to why I came back. I remember being told by members of my community that I should leave the neighborhood because I have a college degree. I was an anomaly because of my educational trajectory. 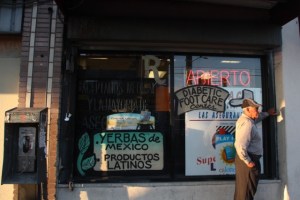 The common narrative repeated within low-income neighborhoods is that people should get an education and move out; however, I argue that more Latino college graduates should return to their hood. If there are more Latino college graduates within a neighborhood, then we can leverage social and cultural capital to create multi-generational investments and become homeowners.

Unfortunately, many Latino college graduates who return or move into Boyle Heights may have the unintended consequence of potentially displacing a low-income family. With a college degree, residents are more likely to earn a higher income than the median income of the neighborhood, which means that they will have a higher willingness to pay for a more expensive apartment or house.

According to Ahren’s research, “higher-income Latinos begin to displace lower-income Latinos as a result of the upscaling processes” of the neighborhood, such as the $1 million-dollar streetscape improvement to Whittier Boulevard, the $3.1 million investment for Hollenbeck Park, and the $482 million-dollar development of the new Sixth Street Viaduct.

In order for the neighborhood to remediate the issue of displacement, we need community members to support local Latino-owned small businesses, invest in local non-profit organizations that address systemic issues (such as Leadership for Urban Renewal Network and Promesa Boyle Heights), and influence local, state, and federal elected officials to spearhead equitable housing policies that help renters become homeowners and break down multi-generational poverty. 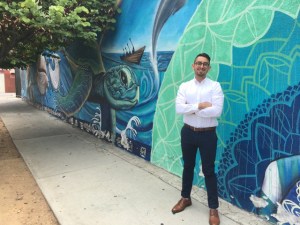 Boyle Heights is at a crossroads. The community needs to develop a collective identity and stance on issues of displacement, affordable housing, equity building opportunities, and homeownership pathways. Ultimately, we need to find a way to revitalize our community without displacing our community.

Steven Almazan is a master of public policy (M.P.P.) candidate (2018) at UC Berkeley’s Goldman School of Public Policy doing research and analysis on displacement, affordable housing, and pathways for low-income families to build equity and capital in Boyle Heights. He is an active runner with the Boyle Heights Bridge Runners, and enjoys a café de olla every morning from La Mascota Bakery.