Walking through First Street in Boyle Heights, the notable history of the neighborhood remains while glimpses of the future begin to blossom.   A place where mom-and-pop shops that were once king, are slowly but surely being replaced with trendy eateries and bars, like Xelas and Eastside Luv. Still Mexican in essence, these places mix in the culture of the old neighborhood while accommodating a new wave of residents.

Local headlines spotlight a single current issue facing this working-class community, as the process known as gentrification takes aim at the Eastside barrio. However, unlike what’s going on in neighboring communities, Boyle Heights’ residents refuse to go down without a fight. Protest after protest with signs reading ”gentrification not welcome” and the defacing of an art gallery with spray paint that read “f*** white art” signal a sentiment felt by many, who believe that they are being forced out of their town. Many local residents old and new believe that the new wave of white, non-Hispanic individuals who are moving in, are doing so with the intention of changing the neighborhood’s culture to the point that it becomes just a moment in history. Yet the locals have other plans.

Many residents who left Boyle Heights are coming back and opening shops and buying homes in an effort to keep the neighborhood in its people’s hands, a rebuke to gentrification called “gentefication.” This process refers to a beautification of the neighborhood by the people and for the people, aiming to maintain the area’s culture and keep the prices of homes from skyrocketing, which is what is forcing many locals out.

An example is the playwright and screenwriter of “Real Woman have Curves” Josefina Lopez, who returned to her old neighborhood and opened the Casa 101 playhouse. She recently joined forces with director Corky Dominguez and a group of actors to create a new theater production titled “Remembering Boyle Heights” which opened last month and runs through Sunday, December 16. 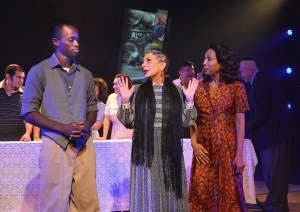 The play itself starts off in the lobby of Casa 101 where the walls, painted a rich yellow, are covered by images from the past, as well as paintings by contemporary artists, that portray various aspects of Mexican life. Among the historic images, several of Edward Roybal and his journey to become the 20th Century’s first Mexican American member of the Los Angeles City Council. They depict how Roybal earned the support of many of the neighborhood’s past residents, including Japanese, African Americans and European Jews.

The storytelling begins with a mariachi and two young women dressed in traditional Mexican attire. They say they fear that their neighborhood is being taken over by greedy developers, who seek to over price rental units and commercial spaces, in order to drive residents out. The audience is then led to the auditorium and becomes part of the play itself, witnessing an argument between natives and developers: one side claims that the neighborhood is being taken over while the other shouts back, stating that all neighborhoods eventually change and its “just a matter of time”.  After the powerful scene exposing current tensions, the audience takes a seat and delves into Boyle Heights’ diverse, romantic and –at times– dark history.  From the purchase of the land east of the L.A. river by Andrew Boyle to the eventual election of Edward Roybal, the production does an excellent job of providing insight from many of the neighborhoods former ethnic groups and shows that, no matter how many different ways its residents may have worshipped and looked, at the end, Boyle heights was all one.

A story about a Jewish event with Latino, African American and Japanese guests showed how everyone regarded each other as friends in one of the only neighborhoods that was accepting of racial minorities in Los Angele’s tumultuous past.  Tales of the building of Roosevelt High School, the original Canters delicatessen, the five-cent movie theater on Brooklyn Ave. (now César Chávez) and the walks through Hollenbeck Park show how tolerance and understanding can create a special place.

But not all times where happy and glorious. The production shines light on the divide that existed behind closed doors and how even some people’s acceptance of others had its limits. Furthermore, the uprooting of Japanese Americans during World War II by President Roosevelt’s executive order number 9066 force many in the neighborhood to watch their friends loose everything and vanish, due to xenophobia and racism. 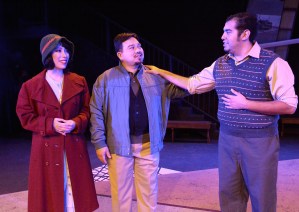 The story culminates with Roybal and his attempt to enter local politics, failing at first but eventually winning with the support of his wife Lucille.

Congresswoman Lucille Roybal-Allard, who represents California’s 40th District and is the daughter of Edward ad Lucille, attended he play’s opening night last month. She was brought on stage by Josefina López, who presented her with a painting. Royball-Allard said the production “brought back a lot of childhood memories”.

History, if forgotten, tends to repeat itself and, often, it’s the most vulnerable who bear the brunt of the latest issue, no matter what that may be. In trying times, the people must come together and fight to preserve their way of living while also remembering all those who came before them.

A special matinee performance of “Remembering Boyle Heights” on Saturday, December 15, 2018 at 2:45 p.m. will be attended by several members of the Roybal family and will be followed by a panel discussion about the life and legacy of Edward and Lucille Roybal. Two of their children, Lillian Roybal Rose and Edward Richard Roybal Jr., will be part of the panel.

Tickets are $20 per person for General Admission; $17 per person for Students and Seniors; and $15 per person for Boyle Heights residents.  Discounts for Groups of 10 or more will be available at $15 per person. This show is recommended for all audiences. Advance reservations are highly recommended. Free Parking is available on several streets surrounding the theatre. Free Parking is also available on Fridays and Saturdays only at the Boyle Heights City Hall Parking Lot located at 2130 East First Street (at Chicago Street) by entering the lot from Chicago Street; the lot is closed on Sundays.