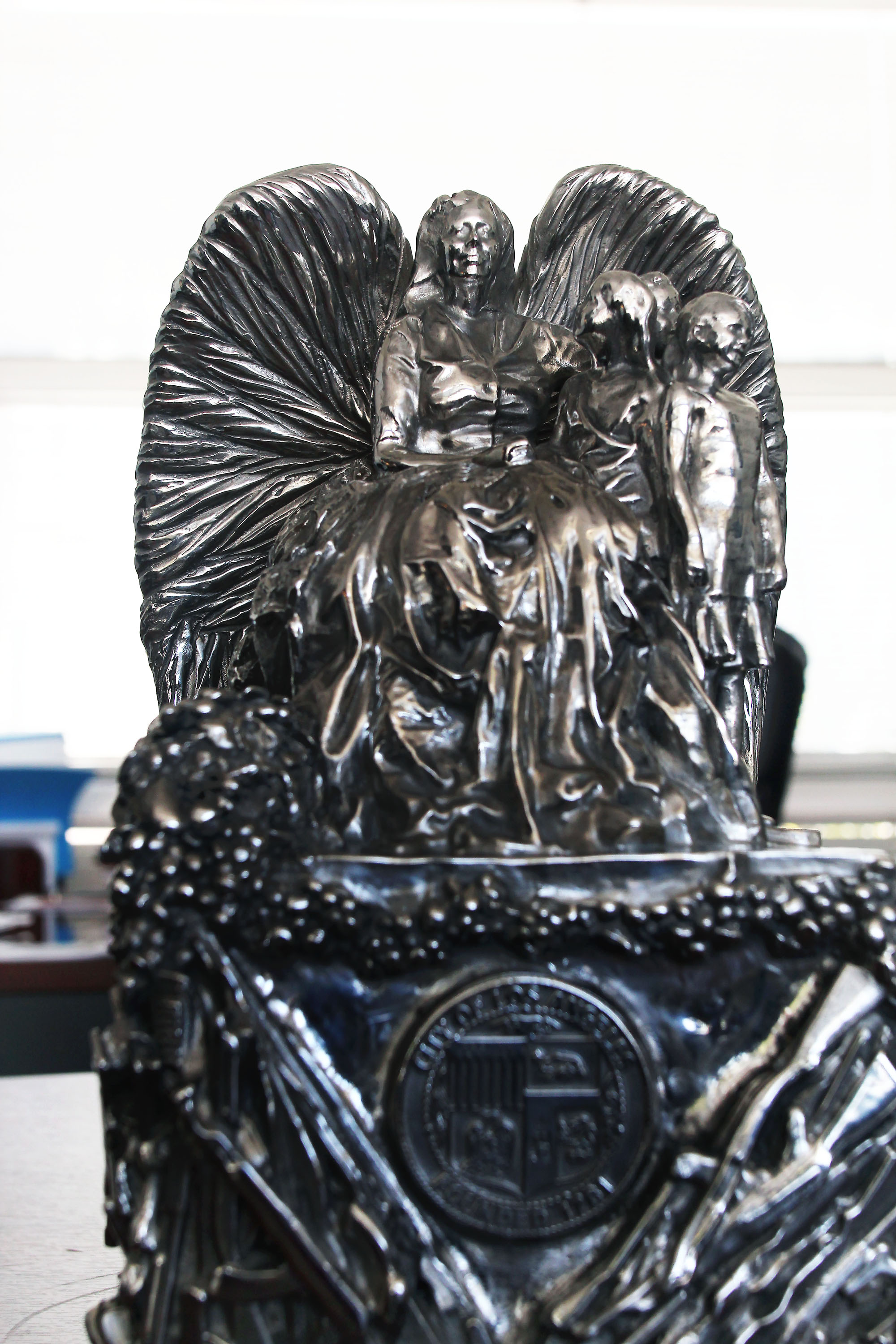 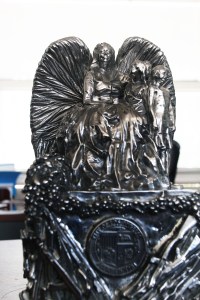 A model of Lin Evola’s “peace angel” sculpture, which will be placed at 4th and Gless streets in September. / Photo by Jonathan Olivares

In November 1992, artist Lin Evola had a vision while standing at the intersection of 4th and Gless streets, in front of a motel marked by a history of murder, drugs and prostitution. Evola saw seven angels, who spoke to her about the doom of humanity if she did not soon initiate an endeavor of peace.

Lin returned to Los Angeles nearly two decades later to fulfill that vision ”“ seeking a place to create and install a peace angel sculpture. She was touring Boyle Heights with an old friend and stopped on a corner. She suddenly realized it was the location of the hotel she visited in 1992.

Today, a symbol of transformation stands in that very place: the Boyle Heights Technology Youth Center, a multipurpose community center and high school. In September 2013, the technology center will become the home of her first peace angel monument for California, created from thousands of melted weapons that gun owners turned in to the Los Angeles Police Department in return for an incentive.

The idea of the peace angel inspires her artistic work, which uses art as a medium of peace and transformation.

In her art endeavors dedicated to promoting peace, she has created and placed peace angels in Johannesburg, South Africa; Bosnia/Herzegovina; and Jerusalem. Her work has been viewed in exhibits around the world and is collected by prominent people and organizations worldwide, including Bill and Hillary Clinton, Her Majesty Queen Noor al Hussein of Jordan, Sarah Brady, The Joseph Campbell Foundation, Marion Rockefeller Weber, Vera Pratt and Anne Cooling.

Evola talked with Boyle Heights Beat about her inspiration and her experience creating an artistic monument calling for peace in Boyle Heights. This is an edited transcript of the conversation.

Why are you contributing the peace angel to Boyle Heights?
In 1992, I started coming to Boyle Heights, and I had an inspirational experience. I started to go there because of Father Greg Boyle of Homeboy Industries. When I was there, I found out from the mothers there how they were losing their sons, and I saw the families fighting to save their sons, and such power from the family and the community and Father Greg and Father Kennedy. The troubles are so pervasive, and kids were getting killed, and this was going on and on. It was a struggle almost as if it was a separate country, and I fell in love with the families, especially the mothers.

You worked with Father Boyle during that time and spent time here. Why Boyle Heights?
I saw seven angels for two hours in November 1992, and they told me if we didn’t do something, humanity would not continue because of the violence. And they showed me what our world would become. And I feel very strongly that there are certain places on the Earth ”“ and they’re almost like acupuncture points ”“ where there is a very strong contrast between war and peaceful living, and I think that East L.A is one of those places. So is New York.

To what extent did you see people protect their children?
Not everybody does, which is shocking to me, because my son is everything to me. When you are anticipating the child’s actions, and you are in a very dangerous neighborhood, it is very intense and hard. I want the peace angel to create awareness and create another layer of protection, because nothing, nothing ever takes the place of a family.

What do you think it will mean to future generations of Boyle Heights?
I think it will stand as a reminder that there was a line drawn in the sand, that people were not going to put up with the violence any more, that this is land of peace. And it takes a great deal of effort to create land filled with peace, and that is what I hope it will represent.

What do you believe is in store for Boyle Heights?
I feel that it can be very prosperous. I hope to see teens attending college and becoming doctors and studying what they love.

Do you expect the Angel to be a beacon of hope?
Yes, of hope and fortitude and strength.

What are some obstacles that you had to overcome to get the peace angel to the Tech Center?
Continually staying strong myself, to overcome the death of my husband, and then getting funding.
How many times did you visit Boyle Heights, and what are some things you experienced?
Maybe 40 times. And, well, I aged there. I talked to people about where the peace angel should go, and what was going on in the neighborhood.