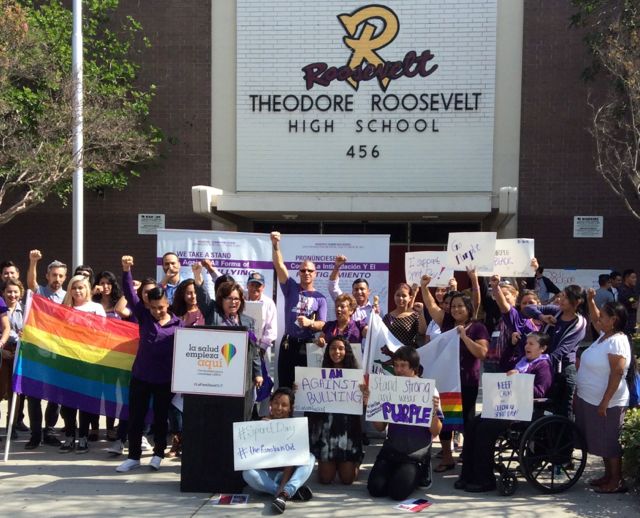 High school isn’t the most welcoming or safe place for adolescents who don’t meet the “standards” set by their peers””even less for a LGBT student.

These four years are when you figure out who you are, what you like and dislike, and your future role in adulthood.

However, after transferring from the Environmental and Social Policy Academy”” a very small school””to the main Roosevelt High School campus, I noticed a huge difference in the way people treat one another.

Because it is a more diverse school, and it holds more than 2,200 students, it is easy to find someone to pick on. The most common things that provoke a bully are gender identity or sexual orientation, race, ethnicity, appearances and disabilities. Queer students of color face the most harassment.

Discrimination and harassment is nothing new, but that doesn’t mean we shouldn’t continue promoting equality. On October 16, 2014, students from the Latino Equality Alliance’s Lesbian Gay Bisexual Transgendered, Questioning, and Allied Youth Council and the Roosevelt High School’s Gay Straight Alliance (GSA) club celebrated Spirit Day, a day when millions of people stand against bullying and wear purple as a way to show their support of LGBT youth.

I was excited to see my peers and teachers wearing purple in support of this day. It was even better to see them show up at the Spirit Day press conference and listen to what we had to say. Parents spoke up as well. It was heartwarming to see because I have friends who got kicked out once they came out to their families and are still roaming the streets searching for a place to rest or a friend’s house to spend the night in.

I feel like the GSA club along with the staff, teachers, parents, and principal helped us make our point that there are people out there who are going to want to hurt each other but there are more people who want to help youth. If people could become educated on the harmful long-lasting effects bullying has on a teens’ lives, it wouldn’t happen as much as it does now. In future years they won’t have the self confidence they need for a job interview or to meet new people, because of all the teasing they endured during high school.

A positive change in attitude can come a long way when dealing with bullying. Don’t join in or watch it happen-you can make someone’s day by making it stop. Everyday should be an anti-bullying day.

Diana Torres is a junior at Theodore Roosevelt High School, a member of the Latino Equality Alliance’s Lesbian Gay Bisexual Transgendered, Questioning, and Allied (LGBTQA) Youth Council, and president of her school’s Gay Straight Alliance (GSA) club. She strives to create change in her community by addressing the problem with bullying.