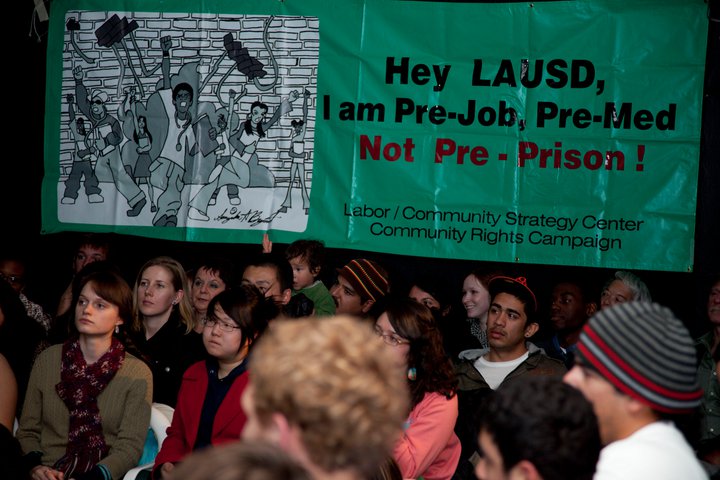 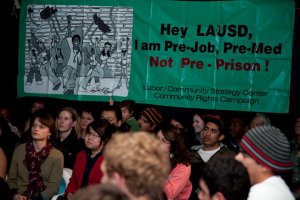 We’ve all been caught running late to school, rushing before the bell rings to avoid a tardy slip and detention. However, these days, being tardy to school has had much harsher consequences.

Under Los Angeles’ daytime curfew law, youth who are not in class during school hours are detained and face $250 fines. They then must make a mandatory court appearance with a parent or legal guardian. These “truancy” tickets, which aim to keep students in school, are instead creating a hostile environment for students. They also pose a financial burden on low-income families.

At Theodore Roosevelt High, where I attend school, police would often detain students as they rushed to school in the morning, even if they were just 10 minutes late. Many felt this was counterproductive.

After pressure from parents, students and organizers from a host of community groups and civil rights non-profits, the Los Angeles Police Department made changes to the way it enforced daytime curfews last April. As a result, officers have been ordered not to conduct truancy sweeps during the first hour of classes, to ask students if they have an excuse before ticketing them and to stop issuing tickets on or near school grounds. In late October, similar procedures were adopted by the Los Angeles School Police Department.

Although the new policies are a step in the right direction, the daytime curfew laws are still in effect and truancy sweeps can still be conducted. This means that there are still circumstances in which students will be detained, put in squad cars and face heavy fines and the court system.
Recently, Los Angeles City Councilmember Tony Cárdenas, backed by Councilmember Bernard Parks, proposed an amendment to the daytime curfew law that would eliminate fines for those issued truancy citations. The proposal is scheduled to be reviewed by the city council in November.

Cardenas and Park argue that “truancy” tickets are a waste of time and money for students and parents, and they cite concerns for Latino and black youth who are ticketed the most.

Research from the Los Angeles-based Community Rights Campaign, a “think tank, act tank,” shows that 88 percent of the 47,000 tickets issued by LAPD and the Los Angeles School Police Department from 2004 to 2009 were given to black and Latino students even though those students represent only 74% of students. For these students, this is not just a ticket, it is an early start to negative experiences with police and the court system ”“ creating what opponents call the “school-to-prison pipeline.” Students cannot thrive in conditions where a small mistake, like arriving late, is treated like a crime.

At Roosevelt High School, I saw this firsthand. For a while the cafeteria became a regular processing center for students detained by police for being late.
Senior Irma Galicia remembers this scene clearly. During her freshman year, she was ticketed, steps away from the school’s front gate, just minutes after school began. “We were asked to stand near the fence and we walked back into school in a single file line,” she said. “I felt like such a criminal at that time.”

After LAPD’s policy change last April, school officials began to rely more on detention ”“ rather than police ”“ to enforce the anti-truancy daytime curfew. The detention is monitored by teachers and staff. Attendance at Roosevelt High School has slightly improved, showing that ticketing students is not a successful means of discipline.

Cardenas’ proposed amendment to the daytime curfew law ”“ which would eliminate truancy fines”” should be made permanent by the city council. However, even more can be done. “We need more counselors not cops, teachers not tickets,” in the words of the Community Rights Campaign I joined to fight current anti-truancy policy. Students need the school to help them deal with their tardiness and get to the root of the problem. They need a safe place where they can be listened to, because for them, school is their second home.