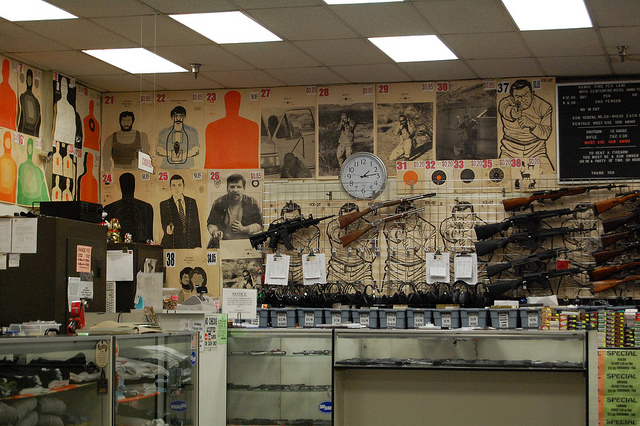 Seen from Boyle Heights, national politics sometimes seem distant and difficult to apply to our daily lives. (Benghazi comes to mind, for example.) But the current debate on gun control, renewed by last Friday’s shocking murder of 26 children and adults at Sandy Hook Elementary School, is an issue that speaks directly to our community: Stronger nationwide protections against gun violence would make Boyle Heights safer.

In recent days, the national dialogue has brought to the forefront two overarching facts about firearms in the United States: 1) We live in the country with the most guns in the world, 89 for every 100 residents; and 2) Ours is also one of the most violent.

In a survey of the 23 richest nations’ firearm homicide rates, that of the United States is 15 times greater than the combined rate for all the others. It is no coincidence that both of these things are true about the United States. People intent on killing prefer guns, which is why guns are used in two out of every three homicides.

Last year there were 8,583 people murdered with guns in the United States ”” the equivalent of nearly three 9/11 catastrophes in a single year. In 2009, the number of children ages 10 and younger shot to death (both intentionally and accidentally) was 151.

Societies with fewer guns per capita ”” excepting those where war or extreme instability exist ”” simply don’t have the same astronomical murder rates.

There could be no better example of the increased danger that guns expose to society than news of another attack on schoolchildren the same day of the Connecticut massacre, an incident in China with a different outcome: Of 23 kids stabbed with a knife, all are believed to be alive.

Whatever may drive a man to such a crazed act of violence, it is clear that guns make it many times more lethal.

It is alarming to hear that mass shootings like the one in Connecticut are occurring with more frequency: Of the 62 most devastating shootings since 1982, according to Mother Jones,  seven have taken place just in the past year.

However, Boyle Heights residents have long had to contend with unacceptably high levels of gun violence and death. This is partly because big cities like Los Angeles often have a higher rate of violence than non-urban areas.

So while the national firearm homicide rate was 4.2 per 100,000 in the 2006-07 period, according to the Centers for Disease Control, the rate in the city of Los Angeles was 9.2. But it is also because a disproportionate amount of the city’s criminal activity happens in its low-income neighborhoods, such as Boyle Heights. In fact, a look at the Los Angeles Times Homicide Report shows that gunfire has killed 71 individuals here since 2007 ”” about one person per month ”” bringing our gun homicide rate closer to 12 per 100,000.

Government data also show that the likelihood of Latinos (and African-Americans) to die from bullet wounds is above the national average. In 2007, 1.5 whites versus 5.2 Latinos per 100,000 people were shot to death. (The gun homicide rate for African-Americans was by far the highest, at 18.1 per 100,000.) Perhaps that is why Latinos are also strong supporters of gun control.

Completely banning the possession of firearms is unnecessary and unlikely to happen in a country with such a strong gun culture and   with gun rights enshrined in the Second Amendment of the Constitution (“A well regulated Militia, being necessary to the security of a free State, the right of the people to keep and bear Arms, shall not be infringed”).

But two important measures should be taken to curb the violence. For one, we should reconsider which firearms exactly the citizenry may have the right to own. The notion of limits on keeping and bearing arms is not new or radical: As a gun-rights zealot admits in Michael Moore’s “Bowling for Columbine,” people shouldn’t have the right to keep an atomic bomb at home.

It is also important to keep in mind that the shotguns that existed when the Second Amendment was written in 1789 weren’t as dangerous as today’s AK-47s and other semiautomatic rifles.

We should also implement a licensing program that includes background checks and training for anyone wishing to obtain a firearm. Japan sets an example that we may learn from, as described in an Atlantic Monthly article earlier this year:

“To get a gun in Japan, first, you have to attend an all-day class and pass a written test, which are held only once per month. You also must take and pass a shooting range class. Then, head over to a hospital for a mental test and drug test (Japan is unusual in that potential gun owners must affirmatively prove their mental fitness), which you’ll file with the police. Finally, pass a rigorous background check for any criminal record or association with criminal or extremist groups, and you will be the proud new owner of your shotgun or air rifle. Just don’t forget to provide police with documentation on the specific location of the gun in your home, as well as the ammo, both of which must be locked and stored separately. And remember to have the police inspect the gun once per year and to re-take the class and exam every three years.”

An additional point to consider is that gun laws, in order to be effective, must be created nationally. Critics often point to cities or states with relatively tough firearm restrictions but which still register high levels of gun violence.

It doesn’t take a genius, however, to see that sound gun laws in one locale are simply undermined by more permissive policies in a neighboring jurisdiction.  Mexico is a good example. Its tougher gun restrictions, designed to keep Mexicans safe, are rendered nearly meaningless by the illegal flow of high-powered weapons from the United States, the origin of over 70 percent of guns recovered from crime scenes.

National restrictions in the United States on gun manufacture, sales and possession would ensure greater safety both throughout this country and the south of the border.

What are your views on gun control and possible effects on Boyle Heights? Anyone interested in writing a response editorial can email [email protected]

Jesus Hermosillo currently resides in Boyle Heights and spent the most memorable years of his childhood at Wyvernwood Garden Apartments. He earned his bachelor’s and master’s degrees in urban planning at UCLA.