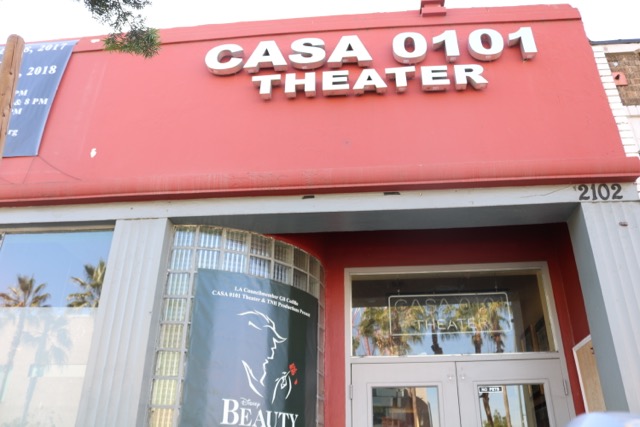 The founder of CASA 0101 Theater said the Boyle Heights nonprofit is “on the brink” of closing and has launched a fundraising campaign to rescue the beloved local arts organization.

“I started CASA to create opportunities for actors and writers and artists,” said playwright Josefina López in a statement released Monday. “This is the kind of place that I wanted when I was a little girl. I thought this would be my way of giving back to my community in Boyle Heights. But, unfortunately we are on the brink of closing down because we can’t pay our rent, so we need your financial support.”

The statement by López was part of a video posted last month in YouTube, where the theater’s Founding Artistic Director appears with Executive Director Emmanuel Deleage and the president of its board of directors Edward Padilla.

The three announced the launching of an online fundraising campaign: the theater is seeking 350 patrons to become recurring donors at a minimal rate of $25 a month.

“This will insure our financial stability,” said Deleage in the statement, adding that the theater has already lined up 77 of the 350 donors needed. “It’s very possible to do it, but without it, unfortunately we may have to close our doors.”

“Over the years we have produced well over 100 plays, offered countless classes and presented many art exhibits,” said Deleage. “We invest heavily in our productions.  Like many arts organizations, our theater is no longer able to sustain itself alone with our ticket sales and limited grants.”

Last month CASA 0101 just completed a successful run of Disney’s “Beauty and the Beat,” a co-production with other organizations that was extended one week beyond its original six-week schedule.

In spite of its financial woes, the theater announced an ambitious 2018 schedule that will include “Brown & Out IV,” a festival of short plays “celebrating the LGBTQ+ Latinxperience” February 9 to March 4; “Chicanas Cholas y Chisme VI” March 16 to April 15; and a restaging of “Beauty and the Beast, May 4 to 27.

López also said she is writing a play titled “Remembering Boyle Heights” which she expects to stage in June.

In February the playwright and screenwriter will lead a free five-day screenwriting class “solely for students who identify as Latino and who wish to write Latino protagonists” and made possible by a grant from the Eastside Arts Initiative.  Also in February, the theater will relaunch its free youth acting program for Boyle Heights residents aged 16-21, funded by the California Endowment’s Building Healthy Communities initiative. Classes led by Padilla and director Corky Domínguez will take place February 10 to April 21.

In March, the Boyle Heights Museum housed at CASA 0101 will present an exhibit commemorating the 50th anniversary of the East Los Angeles student walkouts, presented by the USC Center for Diversity & Democracy.