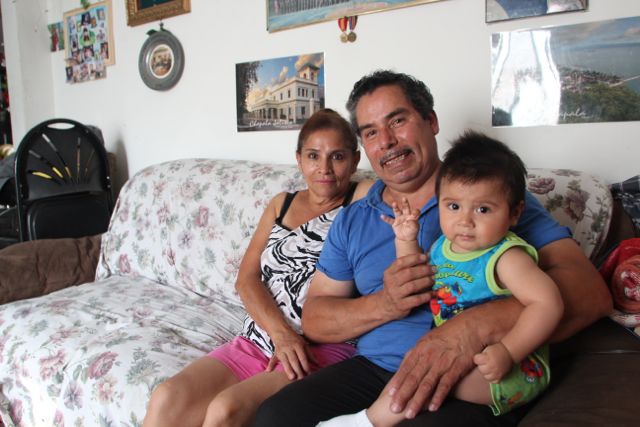 José García gripped an envelope in a plastic bag as he and his wife sat in a crowded waiting room at the AltaMed Health Clinic on Whittier Boulevard at Rowan Avenue in East Los Angeles.

“We’re here to apply for Medi-Cal,” said García, 56, drawing attention to check stubs, marriage certificate and other legal documents stuffed into the bag.

The couple, who care for a grandchild and one teenager of their own, has only ever had health coverage for one year, about five years ago. They enjoyed the stability it gave them.

“I felt good, protected. For any little thing I would go in and they would immediately run tests,” said Teresa González, 51, García’s wife.

That feeling of security will soon be available to many of the 48.6 million uninsured Americans.

New options
The Affordable Care Act will allow California to expand Medi-Cal to cover about 1.4 million more people by next year. Adults in California with incomes below 138 percent of the federal poverty level — or $15,415 annually for an individual ”“ will be eligible. Previously, childless adults couldn’t qualify at all. And eligibility for parents was limited to those earning less than 100 percent of the poverty level.

Another new option for coverage, starting in January, is an online marketplace, called an exchange, where uninsured individuals and families, as well as business owners, will be able to compare prices and plans and buy health insurance. California’s exchange will operate under the name Covered California. People who earn under 400 percent of the poverty level will be able to obtain government subsidies to buy insurance through the exchange. (Most people will continue to get insurance through their employers.)

The new law requires almost everyone to have insurance, either through their employers, a government program or a private policy. Most people who don’t sign up for an insurance plan will have to pay a small fine.

However, people who can’t afford to buy insurance are exempt from fines. Residents who are undocumented or who have been here legally for less than five years won’t be fined. But they can’t apply for Medi-Cal or purchase individual policies through the new health insurance exchanges.

California has more uninsured people than any other state ”“ 6.8 million — and about 60 percent are Latino.

Almost 30 percent of Boyle Heights residents fall under the poverty line, and many already qualify for Medi-Cal. But many are uninsured and don’t know that they’re eligible for Medi-Cal or the new private insurance subsidies. Or, like the Garcías, they haven’t thought they needed insurance or could afford it.

The Garcías say they didn’t explore their insurance options earlier because all family members are healthy and they preferred paying the lower medical costs in México when they needed care.

But when García, a construction worker, became unemployed after injuring his finger at work a few months ago, he decided it was finally time to seek health insurance.

California’s exchange will open October 1. Enrolling people for coverage won’t be easy. Many uninsured don’t know that they are required to get insurance and what their options are.

“They’re confused about what it is. They’re scared, because all they hear is, ‘You’ll be fined,’” says Sujey Paniagua, the patient care coordinator at the AltaMed clinic where García was applying for coverage.

Others simply aren’t aware of the coming changes. To address this, outreach campaigns are slowly being mounted in communities across the nation where people like Paniagua will provide education and help people seek coverage through the exchange.

“As new information comes about, they’re having training with us as soon as they can. We’ve also had fliers that are being sent out to us to share with patients,” said Paniagua.

The hope is that the preparation will pay off so people will be more informed and benefit from these changes.

More choices
“It’s going to mean a lot of opportunity to really take advantage of the expansion and be seen, and have more choice,” said Dr. Gregory Roybal, the medical director at Roybal Comprehensive Medical Center in East L.A., a county-operated clinic. “I think that, at least in California, it’s going to be actually pretty successful.”

Right now, uninsured Boyle Heights residents have limited choices for health care, mainly county medical centers and community health centers. Once insured, they will have more choices. As a result, many advocates believe their care will improve, which could lead to overall better health.

“They’ll go where they think they’re getting the best value or the best care,” said Roybal.

However, not everyone is convinced that Obamacare will be successful.

Many people who won’t be eligible for the expanded Medi-Cal or a subsidy may not be able to afford insurance, critics point out. Doctors who serve low-income patients are concerned about possible cuts to their payments by the state Medi-Cal system. Some employers worry that they won’t be able to afford to offer health insurance to their employees, a requirement of large employers in 2015. And undocumented immigrants, who won’t be eligible for any help, are left wondering what their options for affordable care will be.

As for the Garcías, they are waiting to hear if they qualify for Medi-Cal. Receiving that coverage would mean peace of mind and possibly better health.
“It would be wonderful to have those services,” said García, who worries that getting older will bring on more health problems.” If I had those services, I’d be more healthy. I’d worry less about getting sick or saving money to go to the doctor.”