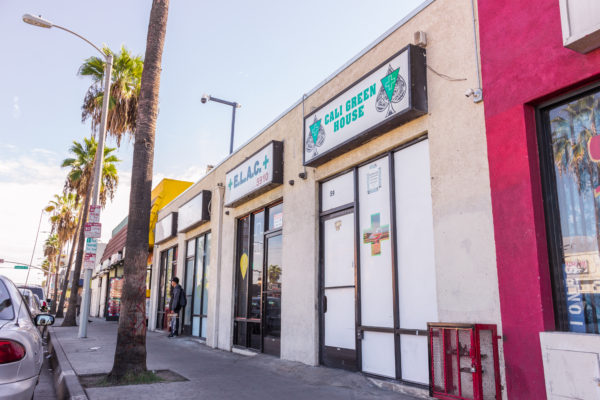 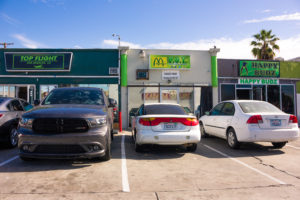 Pot shops in a mini-mall off Whittier Boulevard in East Los Angeles.

In Eastside communities, residents know that a pot shop has popped up again when they see the familiar tinted windows, green cross and green lettering appear on another run-down storefront. Customers flow in and out of these businesses throughout the day, sometimes leaving behind trash or smoking illegally near homes and businesses. Despite bans by city and county authorities, these medical marijuana dispensaries operate in Boyle Heights and nearby East Los Angeles, often illegally.

Last month, California voters approved Proposition 64, which legalizes the recreational use of marijuana. While it is now legal to possess up to an ounce of marijuana and cultivate up to six plants inside one’s home, it is still illegal to buy marijuana, except with what is called “a medical recommendation.”

Under the new Adult Use of Marijuana Act, the state has until January 2018 to issue licenses for the sale of recreational pot. Some legislators are looking for ways to give interim sales licenses to current medical marijuana dispensaries.

Even before the election, Eastside residents worried that the legalization of marijuana would lead to even more dispensaries, which they fear will have a negative impact on the community. Historically, such businesses are most likely to end up in low-income neighborhoods like Boyle Heights and East Los Angeles. 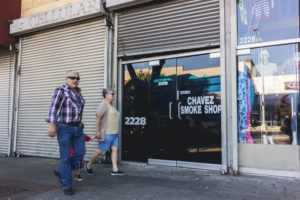 Residents walk past the Chávez Smoke Shop in Boyle Heights.

Chávez Smoke Shop, a hole-in-the wall operation with blackened windows, is one such dispensary. Located on Cesar Chavez Avenue, one of the neighborhood’s busiest business corridors, it is just one door down from Clínica Médica Cathedral, a busy health clinic where children are commonly treated.

A front desk employee at the clinic says that patients in the waiting room are sometimes exposed to the smoke and smell of marijuana.

“A lot of very strange people come,” says Luz, who would not give her last name.  “Sometimes they want to sit here with a bad attitude. They smoke here, just in front of the clinic, and they don’t want to move. It feels very unsafe.”

Cynthia González, a neighborhood prosecutor with the L.A. City Attorney’s Office assigned to the Hollenbeck division, says that such concerns aren’t uncommon. She receives many complaints from schools.

“Everywhere there’s a dispensary there is a nuisance-related issue,” says González.  “Whether it’s loitering, gang members congregating on the outside, the smoke affecting the people outside, kids walking to school having to see marijuana paraphernalia or the smell.”

Police Captain Martin Baeza, commanding officer at Hollenbeck division, which serves Boyle Heights, says that many Boyle Heights residents complain about quality of life issues related to pot shops–“the trash that is left behind, or the people that buy their product and smoke it in the parking lots… or the vandalism that occurs there.” 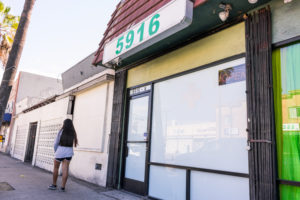 A woman walks past a shop in a one-block cluster on Whittier Boulevard in East LA.

Proposition D, enacted in 2013, banned all pot shops in the city except for about 135 pre-existing medical marijuana shops. The city does not publish a list of permitted pot shops, but most of Boyle Heights’ dispensaries popped up after the ordinance went into effect, and the L.A. City Attorney’s office deems them illegal.

The Los Angeles County Board of Supervisors banned pot shops in unincorporated areas in 2011, but that hasn’t stopped them from popping up in neighborhoods such as East Los Angeles. On one busy block of Whittier Boulevard, not far from Boyle Heights, side-by-side dispensaries can be found, with as many as four on each side of the street. Antonio De Luna, owner of a dry cleaner business on the block, called these businesses a nuisance.

“They’re very filthy.” says De Luna. “They leave behind all the trash they bring. They mess everything up. ”

Andres Azij, an employee of a jewelry shop sandwiched between two medical marijuana dispensaries, says his store was forced to put in a gate to avoid being vandalized.  “We had an incident with one of those people that came for medical marijuana. They came in here and they started breaking stuff,” he recalls.

Operators of several dispensaries refused to talk to a reporter for this story. 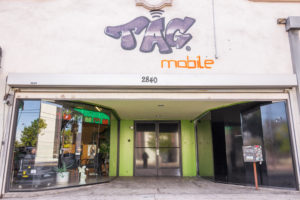 The popular Weedmaps app shows 10 dispensaries in Boyle Heights, some situated very close to homes and elementary schools. The app shows more than 20 shops in neighboring East L.A., several in clusters like the one on Whittier Boulevard.

While it is county and city policy to shut down illegal marijuana shops, authorities claim they lack the resources to go after these pop-up businesses aggressively. After being shut down, they often set up with a different name in another location, authorities say.

On November 8, the same day Proposition 64 passed with 56 percent of the vote, the Los Angeles City Council voted unanimously to place a measure on the March ballot that would repeal Proposition D and develop regulations for marijuana businesses.

It’s unclear what will happen to existing pot shops in Boyle Heights, which is part of the city of Los Angeles, or if the County Board of Supervisors will vote to lift its ban on medical dispensaries in unincorporated areas like East L.A.

Cities and counties have until 2018 to approve regulations for sale and distribution of marijuana. Local jurisdictions will still be allowed to ban sales, but if they do, they forgo tax revenue.

According to a report from the California Legislative Analyst’s Office, taxes on recreational marijuana could generate up to $1 billion annually statewide. Most of this revenue will go to the development of teen drug prevention programs, law enforcement training for marijuana DUI’s and economic development in cities with high rates of arrests and convictions for sale and possession of marijuana.

On the day after the election, the Los Angeles County District Attorney’s office issued new rules for prosecutors to follow in marijuana cases. Many marijuana-related crimes previously treated as felonies became misdemeanors.

The Los Angeles Sheriff’s Department is expected to issue instructions to its deputies on how to handle enforcement for people caught smoking in public spaces, which is still illegal.  The county is also creating guidelines for people who want to have previous marijuana-related convictions revoked, an issue that has disproportionately affected poor communities of color.

Photo above: Multiple marijuana dispensaries dot a small block on Whittier Boulevard in East LA, despite a ban by the Los Angeles County Board of Supervisors. All photos by Ernesto Orozco.