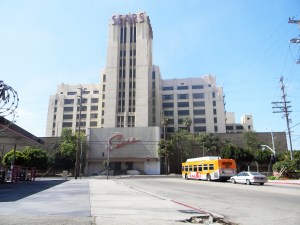 The Sears Roebuck Mail Order building at the intersection of Soto Street and Olympic Boulevard has a new owner who has big plans for the historical landmark. Los Angeles developer Izek Shomof says he looks forward to working with the community to bring the iconic building back to its original glory days.

Join us Saturday, April 5– What Should the Sears Tower become?: A community forum with its new owner

For the past 86 years, the Sears Tower has been a gateway to Boyle Heights. But it is now desolate, with parts in ruins. Bringing the building back to life, as Shomof intends, will mean repainting, repairing its many broken windows, redoing the floors and fixing up everything from plumbing to potholes in the parking lot.

From 1926 to 1992, it served as the retail chain’s center of operations in the Southwestern region and was once the largest employer in the area. Parts of the building were closed off, though the Sears retail store remains open. It was sold to Univest Olympic Royalty in 2000 and then to MJW Investments in 2004.

Over the last 10 years, several investors have attempted to purchase the Art Deco-style structure, including Oscar de la Hoya, who grew up here. Each one made big announcements and then abandoned his plans.

Shomof says he does not want to be like the others. He says he intends to bring the building back to life, and, by 2016, to make it the hub of the community.

Media sources have estimated Shomof’s purchase of the tower to be from $29 million to $32 million but a public record of the transaction could not be found.

The veteran developer spoke to Boyle Heights Beat about his project. The interview has been edited for length and clarity.

BHB: What do you intend to do with the Sears Tower?
IS: For the next few months, our goal is to clean up the site. It’s been neglected and unattended for the last 20 years, and there is a lot of trash, a lot of debris. For the future, hopefully with the help of the city and the community, we are thinking of doing a mixture of retail and residential.

BHB: What interested you in this building?
IS: I love Boyle Heights. It’s a beautiful area, and it’s a historical building, which I love. I own a lot of historical buildings, and I preserve the beauty of the history of those buildings. It’s a landmark that has been unattended, and it needs attention.

BHB: The Sears Department Store on the ground floor remains one of the company’s best performing retail centers on the West Coast. How are you planning to work with them?
IS: Sears is planning to stay there for many years, since they have a long-term lease. What is going to be asked of them is to maybe fix and clean up the store, because it looks like for the last 25 years it hasn’t been renovated.

BHB: You said in a previous interview that you want to make it the “hub of the community.” What do you mean by that?
IS: This is the gateway to Boyle Heights. It should be the symbol of Boyle Heights. I will fix it up, paint it up, fence it with a nice proper gate, so we will make it look like a beautiful landmark when you come into Boyle Heights.

BHB: You have been involved with affordable housing. Is that your plan for the Sears building?
IS: Whatever the market will dictate for the area. I know that there is a lot of affordable housing within the immediate area, that there are a lot of Section 8 buildings within the area. We don’t want to make it just a Section 8 area. We want it to work for the whole neighborhood.

BHB: What do you think is the most important thing people should know about your project?
IS: I want them to know that our goal is to take away an eyesore. It’s a big building that you see from the freeway, from almost every place where you are at, and it needs attention. I know people in the past tried and ended up doing nothing with it, and I hope I am not going to be the third one. I hope with the help of the community we can get the building operating and running and be attractive for the neighborhood.

BHB: This has been a controversial issue in the community. Do you plan to take some input from the community?
IS: Absolutely. We’ll work with them to satisfy their needs to the level that will work also for us. If the community is going to ask us, for example, to put a movie theater in there, and the movie theater will not cost a lot, we may adjust the budget hoping it will just come to us. So we will definitely work with the community and hopefully come to an agreement of what they want and what we can offer, and hopefully satisfy both needs.

BHB: How do you plan to get the community’s feedback?
IS: We are planning to meet with the community in the next couple of months. We will come up with some ideas of what we want to do, and we’ll bring it to the community, and hopefully we will get their support.