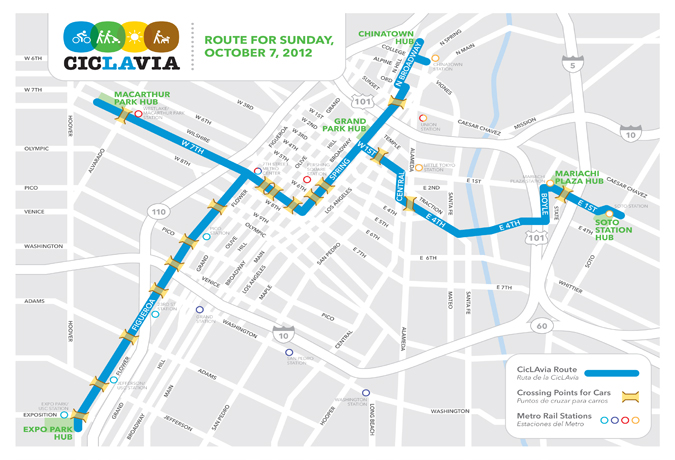 Those in Boyle Heights who enjoy cycling, jogging, skating or simply taking over the car-free streets of Los Angeles, will be happy to hear details on the fifth CicLAvia were announced this week.

In Boyle Heights, the route deviates from its original path, eliminating Hollenbeck Park as a hub station, and instead, turning from 4th Street onto Boyle Avenue for an added hub at Mariachi Plaza. The route then continues through 1st Street for the final stop of the Boyle Heights extension at the Soto Street Metro Gold Line Station. Although the core of the route is essentially the same, five out of the six hubs are at brand new locations.

“[The new route] makes more sense, because [it] utilizes the bike lanes that stretch down 1st street into unincorporated East Los Angeles and the metro stops, making it easier for riders to get to the route and use the metro to cover the entire route,” said Flores.

According to Ciclavia representatives, new hubs were created to give more people and businesses in various communities an opportunity to experience the event. It was also explained that if the Hollenbeck Park hub had remained on the route, it would have blocked in a neighborhood with CicLAvia at three sides and the 5 Freeway on one.

Plans to extend further east””to Evergreen Cemetery and even to the edge of unincorporated East Los Angeles”” have been postposed for past events. Although the route has not fully extended into those areas, due to limited funding and a lack of accessible hub areas, Flores says the now deeper extension into Boyle Heights is a step forward.

“With the new route we will have thousands of visitors exploring the heart of the nascent Boyle Heights Arts District,” said Flores. “I hope this exposure will make Boyle Heights the cultural destination it deserves to be.”

*Updated
In an email sent after this story was published, CicLAvia’s co-founder Aaron Paley explains 1st Street had been a desirable route since the event’s inception in 2010, but Metro Gold Line tracks and construction on the 1st Street Bridge made it impossible.

“Now that we have the possibility of extending further east, we wanted to return to 1st Street because of its cultural amenities- Casa 0101, Self Help Graphics, Brooklyn & Boyle, Corazón del Pueblo- and because of the proximity to two Gold Line stations- Mariachi Plaza and Soto Street,” wrote Paley.

For more information, or to download printable maps, visit www.ciclavia.org.