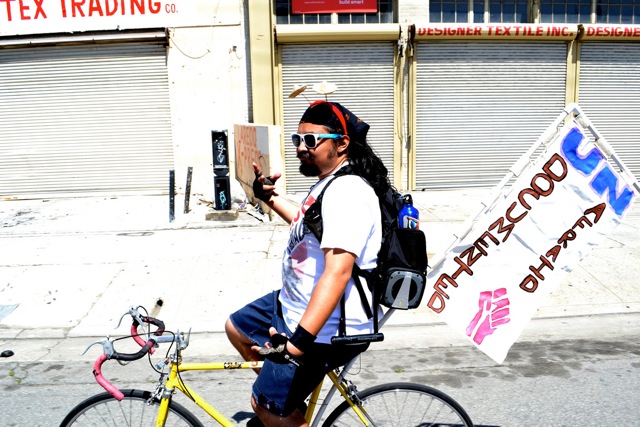 Editor’s note: This is one of a series of community profiles by Boyle Heights Beat youth reporters in response to President Trump’s decision to rescind the DACA program announced Sept. 6.

While many are taking to the streets to protest the end of the Deferred Action for Childhood Arrivals (DACA), Erick Huerta, a 33-year-old activist from Boyle Heights, offers a different perspective. He’s decided to “tune out,” not because of a lack of interest, but because of past experiences.

“There came a point where I realized that I can’t do everything,” he said. “I couldn’t save everybody. I can’t be a Superman.”

His stance is a result of his involvement with activism when fighting for the Federal Dream Act in 2010.

“I was involved for so long that I put other aspects of my life on hold,” he continued. “I was couch-surfing from one place to another and taking up odd jobs wherever I could, all because I was focused on activism. Now it’s time to take care of ourselves.”

Huerta, who works at a non-profit in Los Angeles, recently renewed his application. It will expire in 2019.

“When I think about who is putting on these rallies (today), I just can’t see myself supporting them,” he added. “It’s a lot of elitism. It’s a lot of folks perpetuating narratives that everyone who is on DACA [are] nothing but college kids who don’t know any better and are scared and we should help them.”

Huerta has come to the conclusion that he can’t help everyone, only those most immediate to him.

“I help out where I can, but at this point, it’s up to a whole different set of folks to take up this cause and make it their own,” he said. “Whether I agree with them or not.”

“It’s time to go back to what I used to do, which is basically hustle,” he added. “(And) work (with) what I need to work with.”

Huerta was not surprised when he heard about DACA’s removal. Much of what he has read and heard from friends points to the idea that Trump wants to get rid of most, if not all, Obama-era policies, regardless of whether they are “good” or “bad.”

“I signed up for DACA knowing that this day was going to come eventually,” Huerta said. I didn’t know when…but I signed up knowing that this was temporary. I’m trading my information to the government in exchange for a temporary work permit and…making life easier. To me, that was the trade off. I wasn’t…optimistic that one day it would turn into permanent citizenship or residency.”

Still, he holds a hopeful outlook during these times of uncertainty, with opportunities for undocumented individuals – such as AB540 and the California Dream Act, which offer in-state tuition and financial aid to undocumented students.

“The city [Los Angeles] is always working on something. It’s not perfect, but California has it better than other cities where the community that lives there is actively trying to get rid of you, as opposed to a city like L.A. where a lot of folks are Latino,” Huerta said. “I live in Boyle Heights. It’s stuff I don’t have to think [twice] about.”

Photo above courtesy of Erick Huerta.

Share Your Views: How would end of DACA impact you, your family, your neighbors?