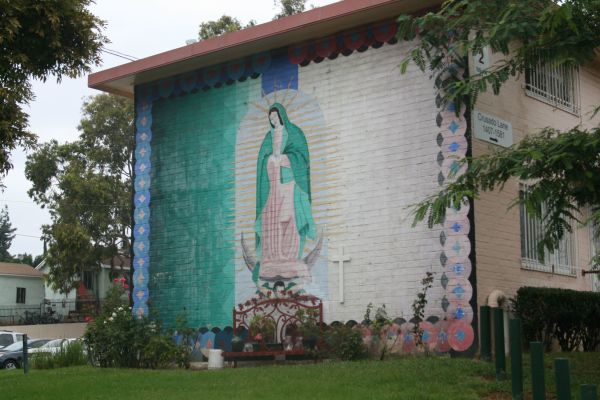 The image of the Virgen of Guadalupe has faded overtime. Photo by Antonio Mejias.

For a while it seemed it would take a miracle from the Virgin of Guadalupe herself to have a Ramona Gardens mural of the religious icon restored in time for her feast day this week. But a crew led by restorer Raúl González, under the supervision of artist Joe Rodríguez, was busy this week putting the finishing touches on the mural painted on the side wall of one of the buildings near the housing complex’s main entrance on Lancaster Avenue.

By all accounts, the mural will be ready to once again be the centerpiece of the Ramona Gardens commemoration of the Feast of the Virgin of Guadalupe. On the early hours of Dec. 12,   the faithful traditionally hire musicians to sing “Las mañanitas” to the icon, an indigenous depiction of the Virgin Mary.

Residents and city officials are expected to attend a mural dedication ceremony that has been scheduled for Thursday afternoon, the eve of the holiday.

The restoration of the nearly 40-year-old mural has long been the dream of Ramona Gardens residents who over the decades have seen it fade under the sun or damaged by wear and tear ”“but never defaced or tagged with graffiti.

Rodríguez originally painted the mural in the mid 1970s, at the height of the Chicano movement for civil rights that involved painters, writers, musicians and other artists in community projects.

At the time Rodríguez was part of an arts collective called Mexicano Art Center that began painting walls in and around Ramona Gardens in 1971, as part of its outreach to area youth involved in gangs. In fact, Rodríguez sought and obtained “permission” from the Hazard gang shot-callers to paint the first mural on the walls of Nico’s Market, the neighborhood’s only store. 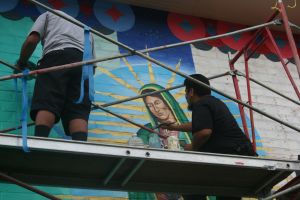 Mural restorers work on the Gudalupana in Ramona Gardens. Photo by Antonio Mejias.

In an interview in November, right before the restoration process began, Rodríguez recalled how his Guadalupana replaced another existing artwork.

“When they asked me to paint it there was another Virgin there,” the 64-year-old artist recalled. “It was painted by Armando Cabrera, a really good artist, but his design was a little way out there for them –lighting bolts and purple and yellow colors. It was kind of psychedelic, and they couldn’t handle it.”

Rodríguez said he asked the original artist for permission to repaint the wall, and proceeded to come up with his own take on the subject, using a more conventional image of the Virgin at the center, but with a twist.

“I made it a little unique,” he recalled, “but I also made it so that everybody could participate in the painting of it.” Influenced by his design studies, Rodríguez surrounded the familiar maternal figure with geometric figures that would be easy for the unskilled to paint. “I made it straight edge, kind of like a coloring book.”

The art collective would eventually get a National Endowment for the Arts grant to paint 30 murals on the walls of Ramona Gardens apartment buildings ”“including some by major Chicano artists like Magú, Carlos Almaraz and Judith Hernández”“ but only about a third of those have survived. His Guadalupana mural was protected, Rodríguez said, because of it’s devotional significance.

“I think it goes down to the roots of the culture,” he said. “People grow up with it, were exposed to it early, your religion is surrounding it, so a lot of people have the reverence for that.”

His geometric design has again served its original purpose during the restoration process, which has involved half a dozen Ramona Garden youth hired by the Housing Authority of Los Angeles (HACLA), the city agency that administers the complex. Restorer González, a muralist himself who has also worked on bringing back the 1984 Olympic murals on the 101 Freeway, said it was extremely valuable to have the original artist involved.

“A lot of times when you’re restoring something when the artist has already passed, you can’t replicate the [original] brush stroke,” said González, 36. Since he’s still here and it’s his piece, I’m actually going to be helping him and becoming part of this mural with the community.”

Rodríguez said he agreed to have the mural restored by González at the request of José Huizar’s staff. At a lunch in August with the Ramona Gardens seniors club, the councilman committed to having the mural painted by Dec. 11.

Rodríguez liked that the younger artist already had a foothold in Ramona Gardens ”“González had worked on two murals in the complex, including one on the outside of the gym that bears   his signature”“ and that he shared his community-minded approach.

At the beginning of the job, González explained the process: first the mural was to be pressure washed, to remove the dirt accumulated over the years; then a protective gel was to be applied, to keep as much of the original paint as possible.

“Once we seal it, once we preserve what was there, we’re going to [paint it] to bring back the colors and we’re going to seal it with a graffiti protective coat,” González explained. “Not because they write on it, there is no graffiti on it.   It’s just to protect the paint, make it last more years.”

“We’re thinking that after the restoration we could go for 25 years or more,” he added.

This is actually the second time the Guadalupana mural is redone: Rodríguez himself repainted it in the ‘90s. But the artist finds that this time around he’s had a lot more support from HACLA, which also paid for the paint and provided some of the tools and equipment used, including the scaffolding on which Gonzáles and several of the youth have been working for almost four weeks. 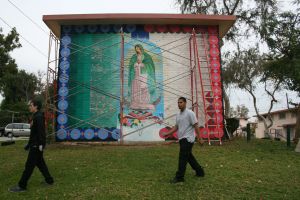 Although the restoration project is respecting the original design, Rodríguez gave González the liberty to improve or make changes to it. This time around, González is putting more detail into the actual figure of the Virgin itself, like painting stars into its gown and refining her facial features. They recruited a third artist, Sunji, to repaint the roses at the feet of the Virgin.

Although the restoration process was slowed down by the rain storms that hit Southern California in late November and Rodríguez himself was hit by the flu, which forced him to cut back on his own work, the mural was to be completed by Wednesday afternoon.

González and Rodríguez expected to be compensated for their work with city funds promised by Huízar, though they had not cleared council committee at the beginning of the restoration and had not become fully available at press time. A spokesman for the councilman said on Wednesday that the mural restoration funds would come from art development fees, and that as much as $10,000 dollars would be allocated to the Ramona Gardens Guadalupana.

The Ramona Gardens Residents Advisory Council and other community volunteers have expressed interest in raising funds for what they hope could become a wider mural restoration project. That would be good news for Rodríguez, who for health reasons wants to pass the paint brush on to González.

“Hopefully he can carry on,” Rodríguez said. “Now that there’s a lot of support and people are craving it.   They want the murals back and it creates community pride. I hope he’s able to continue.”