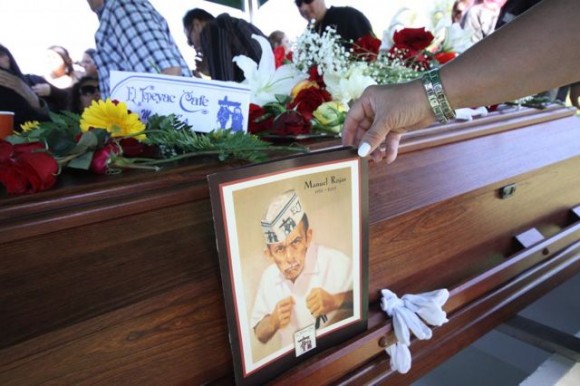 More than 1,000 people gathered at Assumption Church to mourn the loss of Manuel Rojas, owner of El Tepeyac Cafe in Boyle Heights.

Pews were filled to capacity for the Rosary service held across the street from the restaurant. Outside, hundreds more stood in a line that wrapped the corner, waiting for a final goodbye at the open-casket viewing. Rojas died at 79 on Feb. 12.

Edgar Martinez remembers his father’s friendship with Rojas. But some of his fondest memories are how Rojas greeted everyone with a joke.

“Even after my dad passed away me and my wife continued coming to El Tepeyac. He would tell my wife, ‘you know, I used to change your old man’s diapers when he was a baby.’ ”

“Whenever [my parents] would come, he would tell his workers, ‘make sure you bring Ilsuh her chile verde,” said Medel. “He definitely was a legend and this is a landmark.”

For Joseph Nandino, Rojas was like the uncle he never had. He offered him Tequila, he says, and treated him and others like family.

“I liked everything on the menu but every time we went in there in the morning, after coming from a nightclub, we would go there and he would give us a bowl of menudo with a beer and a shot of Chivas Regal.”

Adriana Gonzalez drove through traffic from Chino, Calif. to pay her respects to the man she admired for his love of life and accomplishments.

“Just knowing that it is a local business that has survived through thick and thin is really important to the Hispanic community,” said Gonzalez. “He’s dearly going to be missed.”

Freddy Monares contributed to this story.