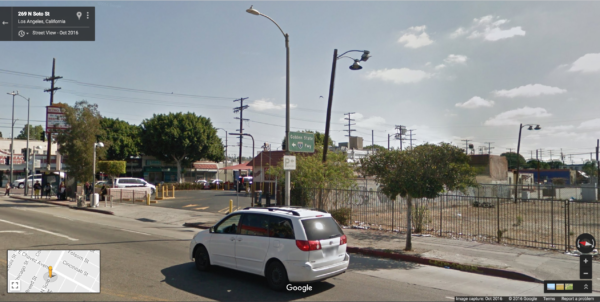 Over 70 affordable housing units could soon be coming to a Metro-owned plot of land that surrounds the popular King Taco eatery, near the corner of César Chávez Avenue and Soto Street.

Curbed Los Angeles reports that Metro filed plans with the city for a 76-unit apartment building earlier this month. The 8,000 square foot project, named La Veranda, will bring 53 two-bedroom units, 23 three-bedrooms, and one manager’s unit along with new retail space.

Developer Abode Communities has reportedly reached out to the neighborhood through meetings and focus groups to plan the project, according to Metro. Apartments there will rent for $560 – $1295 per month and will house residents with incomes between $16,800 and $61,800.

Curbed LA writes that the La Veranda project is expected to begin construction by 2018.

Photo above: View of the Metro-owned plot from Soto Street near César Chávez. The new apartment building will surround a popular Boyle Heights eatery. Photo from Google Maps.