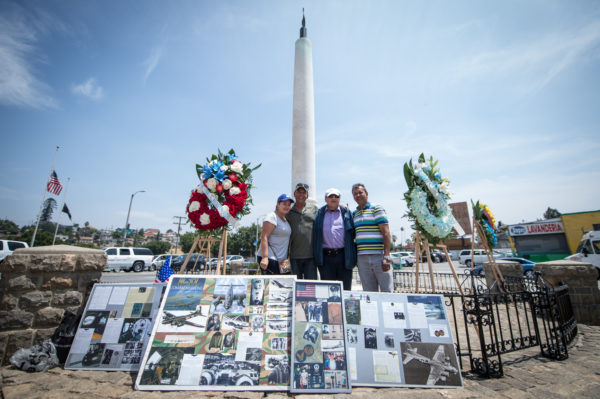 The 71st annual Memorial Day Ceremony returns this holiday weekend to  the All Wars Monument at Cinco Puntos –the five-point intersection of Lorena and Indiana Streets with East César Chávez Avenue, on the border of Boyle Heights and East Los Angeles.

Beginning Sunday at 10 am, local Veterans and supporters will stand guard in a 24-hour vigil at the monument. According to organizers, at least one person will be standing guard continuously in honor of fallen veterans until Monday’s ceremony at 10 a.m.

The All-Wars Memorial –as organizers of the ceremony refer to it– includes a monolith honoring the 350,000 Mexican American men and women who fought in World War II. This group has the highest percentage of Medal of Honor winners of any minority in the United States.

According to a story last month in the Los Angeles Times, the family of one of those veterans disputes the name of the memorial. Eddie Morín told the paper that in 1967 the city named the memorial after his father, Raúl Morín, a decorated veteran and author of “Among the Valiant,” a book about Mexican Americans who fought valiantly in World War II and the Korean War.

The son has long complained that organizers of annual Memorial and Veterans Day ceremonies fail to acknowledge that the monument is named Raúl Morín Square. Zapata told the Times the memorial should honor all Mexican American veterans, not just one.

The City of Los Angeles plans a $10 million renovation of the Cinco Puntos intersection that will include the construction of a traffic circle.