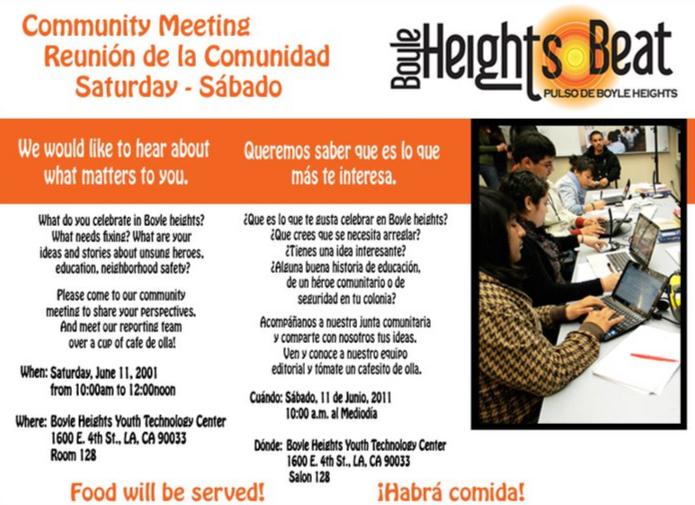 Student journalists from the new Boyle Heights Beat met some of their readers face-to-face on Saturday, and heard many words of encouragement along with a few critiques that reminded the young reporters of their responsibility to be fair and represent the full diversity of the community in their storytelling.

“I’m really excited about this newspaper,” said a longtime community resident about the new publication written by high school journalists under the supervision of journalists and educators from La Opinion newspaper and USC’s Annenberg School for Communication and Journalism. “We have not had a newspaper for Boyle Heights in a very long time”¦ This is the opportunity we need and must have in Boyle Heights to communicate with each other and inform each other.”

A local teacher congratulated the 14 student journalists, who attend four high schools in Boyle Heights and worked for four months to produce the first edition of the publication, which has a print edition that was distributed to 22,000 area homes and web sites in both English and Spanish.

“It is a wonderful project ”“ keep going, and listen to everybody because everyone has different stories and different lives,” the teacher said.

Other community members came to the meeting with story ideas. A longtime Neighborhood Watch block leader encouraged the reporters to focus on public safety and ways to involve community members in crime prevention. “A lot of people don’t want to report the crime, but they report it to me and I’m the so-called troublemaker who reports the problem to the police,” she said. “This is about respecting your neighborhood.”

Another reader wanted to see a regular feature on the cultural diversity and history of Boyle Heights, which has been called the Ellis Island of the West Coast for having served as home to many immigrant groups including Japanese, Russian, Jewish and Mexican populations.

Other suggestions included writing about military veterans from Boyle Heights and featuring sports stars who have community ties, such as the late tennis great Richard “Pancho” Gonzales.

How Reporters Got the Story

Some of the student reporters explained their motivations in choosing which stories to write. Maria Vera wrote about domestic violence to raise awareness of its impact on children. “I wanted everyone to know the effect upon children and how much they suffer,” she said.

For Alejandro Rojas, it was simple curiosity that led him to write about the Sears tower, a once-vital center of commerce that has been shuttered for a number of years. “It has a lot of history behind it,” he said of the tower. “It was a major job provider in its heyday and it’s really sad that it’s not being used right now because it has a lot of potential.”

Jonathan Olivares, a photographer and writer, spoke of the struggle to be even-handed in his reporting. “Even though I know I have to be unbiased, I have a personal tie to Boyle Heights,” said the junior at Roosevelt High School. “It’s my community and it’s my people.”

The young journalists also learned that being a reporter doesn’t always make you the most popular person in town, as they faced critical comments from several residents who were dissatisfied with the publication. The critics encouraged the reporters to be more thorough, to challenge local politicians and take a harder look at stories such as how the city’s redevelopment policies are affecting property values. “The intention is good, but the paper doesn’t reflect my point of view,” one resident said.

The reporters responded by talking about the extensive process they undertook to identify story ideas, research background and interview multiple people for each article.

“If you feel underrepresented in our articles, that’s why we’re here ”“ to create those partnerships and listen,” said Jonathan Olivares, a junior at Theodore Roosevelt High School.

After being reminded that this inaugural publication was the first effort by student journalists who devoted many hours of their free time in the hope that their work would be of service to the community, a local activist in attendance took a moment to explain to the youth that it’s the job of advocates to be forceful.

“We’re very passionate about certain things. I’m from the 1960s ”“ we fight everything,” she said. “You’re going to look at this differently. You may teach us what we’re doing wrong ”“ through your eyes, we may learn more.”