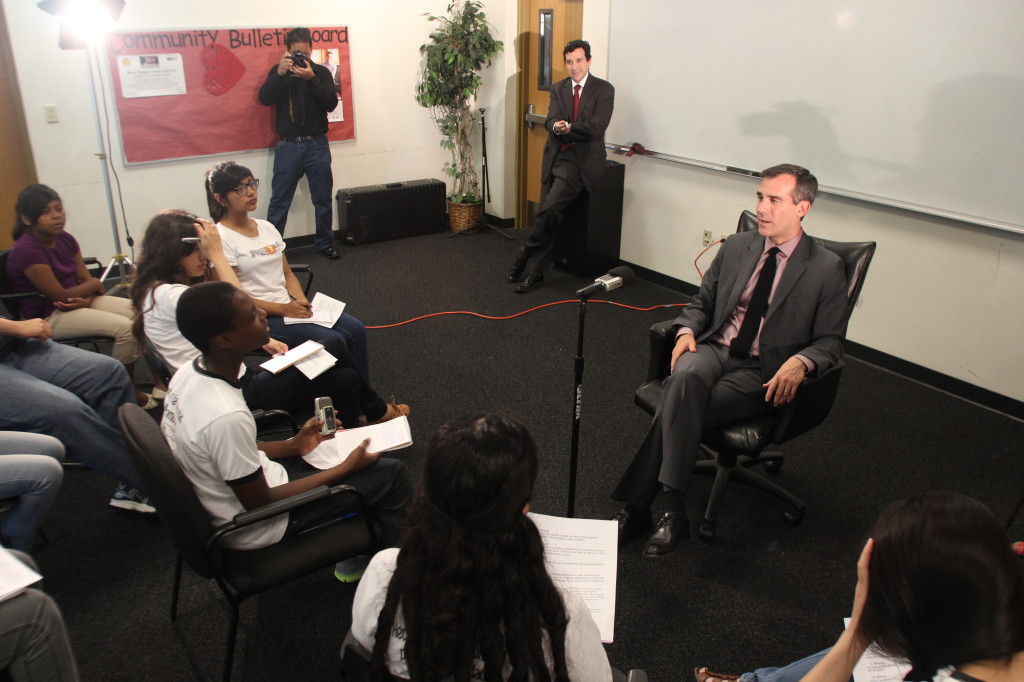 Los Angeles mayor-elect Eric Garcetti discussed his Boyle Heights roots, the economy and whether East Los Angeles should become its own city during an interview with Boyle Heights Beat youth reporters Thursday.

The reporters, teens from the area’s local high schools, met Garcetti for a press conference at the Boyle Heights Technology Youth Center.

Garcetti, who is of Jewish and Mexican descent, began answering questions by explaining how connected and proud he is of his Boyle Heights roots.

“I wouldn’t be possible without Boyle Heights,” said Garcetti.

Although he wasn’t raised in the community, Garcetti’s maternal and paternal grandparents both settled in Boyle Heights in the early 20th century.

When asked about his plans for economic development, Garcetti believes that making it easier for people to start a business is an important factor.

“Jumpstarting the economy is my number one priority,” Garcetti said, as he explained the need for more youth employment opportunities.

Boyle Heights Beat reporters also asked Garcetti about his thoughts on the recent shutdown of Exide Technologies, a battery recycling plant in Vernon that was found to be releasing toxic substances into the environment. He expressed his concerns with it, emphasizing that it is a serious health concern, and that the safety hazards need to be fixed.

“In an ideal world, we’d clean it up, and keep workers’ jobs there,” Garcetti said.

Many have favored the idea of East Los Angeles becoming an independent city. Although the soon-to-be mayor said this would be good for East L.A. pride, he says there are already too many cities in L.A. County -88- and that creating a city would not stop issues such as crime and traffic from spreading across new city borders.

Keeping Los Angeles safe is another important issue for Garcetti. Although he expressed his satisfaction with L.A.’s current gun laws, when Boyle Heights Beat asked him about recent shooting rampages, Garcetti expressed there should be a limits on the amount of ammunition individuals can purchase.

Garcetti is unsure if overseeing the 22 campuses under the Partnership for L.A. Schools, a turnaround model established by outgoing Mayor Antonio Villaraigosa, would be one of his tasks. He explained that it is unclear if the partnership dissolves or continues once Villaraigosa’s term ends. However, he said that some of the programs that the Partnership offers, such as Parent College, would be beneficial to other schools not run by P.L.A.S.

Garcetti is conducting a series of community and virtual forums to answer questions and get feedback on the future of Los Angeles before he takes office on July 1st.