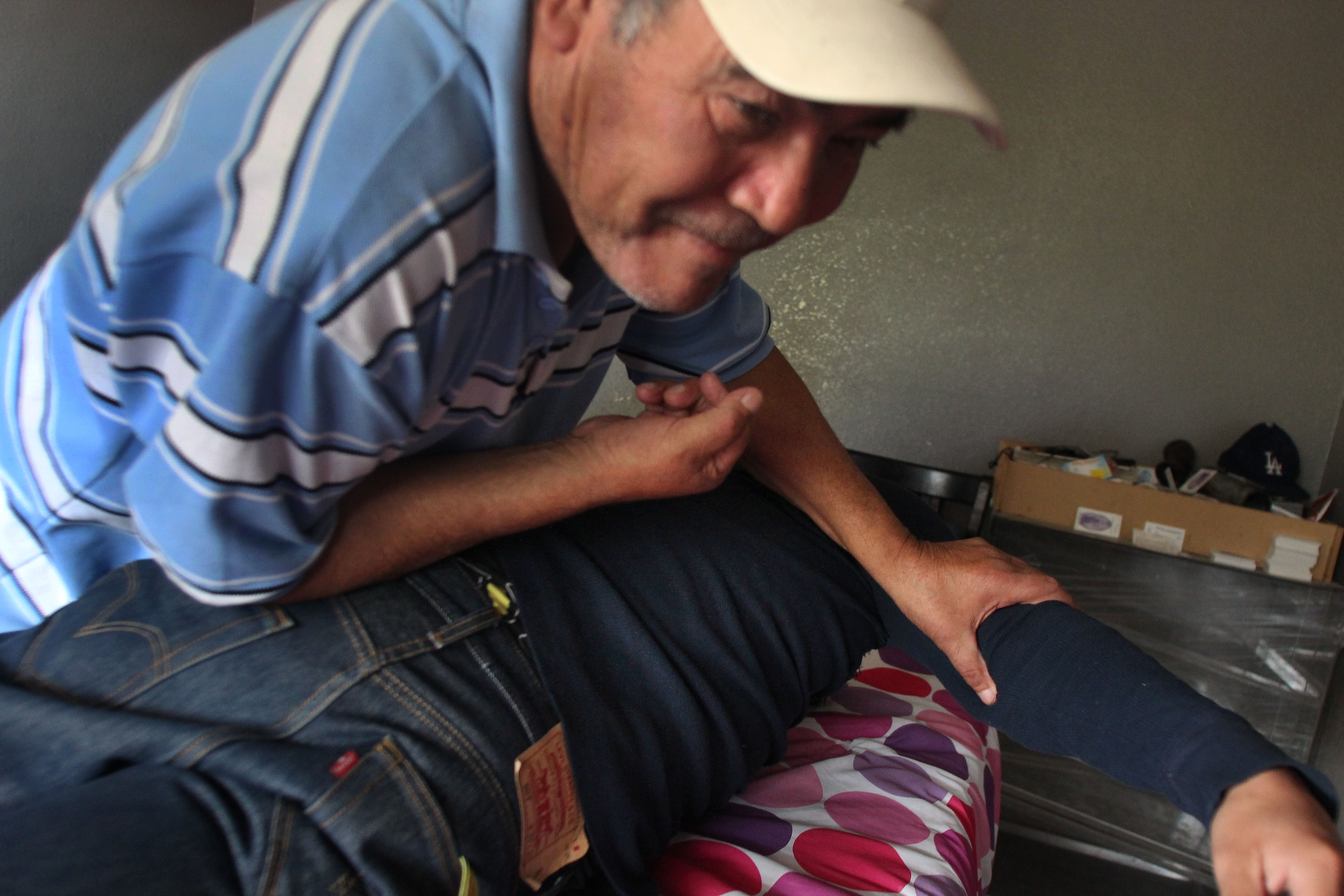 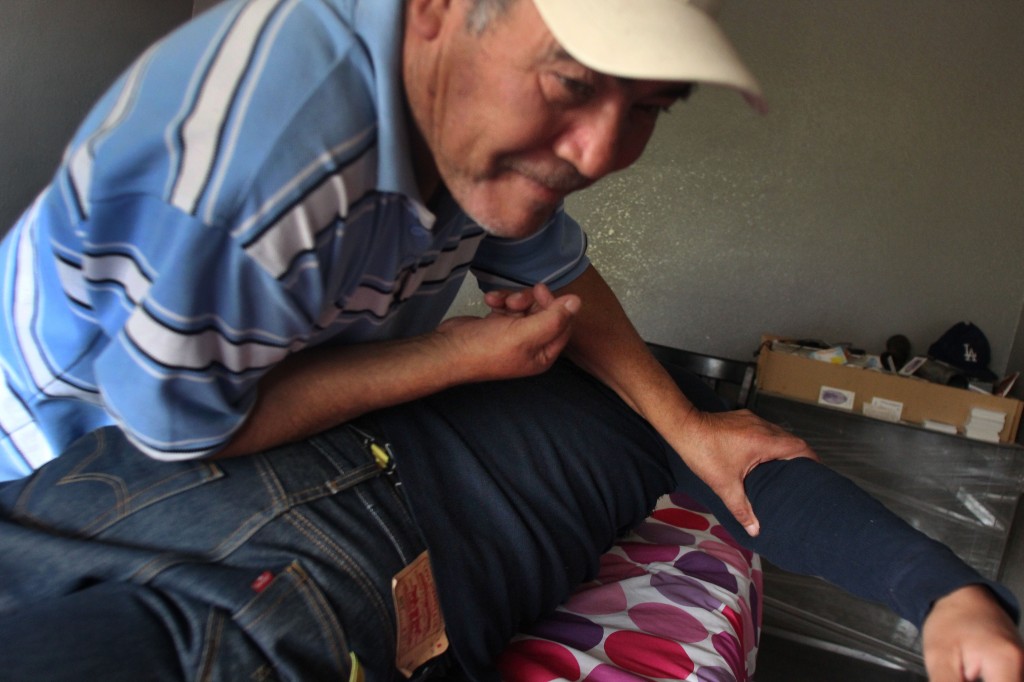 Pedro Granadas, 52, has been a sobador (masseur) for more than 30 years. Granadas manipulates the leg of a Boyle Heights Beat reporter, Omar Durán, during a massage session. / Photo by Jonathan Olivares

Fernando Guzmán had chronic lower back pain, but going to multiple doctor visits became too expensive, and the frequent checkups also prevented him from working. So Guzmán, 58, decided to pay a visit to a sobador, a traditional healer and masseuse that is commonly found in Latino communities.

Guzmán, who usually wears a Mexican flag bandana and loves gardening in his backyard, is among many Latinos in Boyle Heights who go to sobadores instead of doctors.

Some trust sobadores more than doctors. Others enjoy following traditional customs or lack health insurance. People usually find sobadores through word of mouth. Their experiences of this ancient healing technique vary. Some say it leaves them worse, while others say the pain is relieved instantly.

“I have more faith in a sobador than a doctor,” said Gerardo Ochoa, a gardener from Boyle Heights.

But Guzmán, a shuttle driver for a parking company at the Los Angeles Airport, describes his experience with a sobador as “very painful” and says he won’t go back.

Sobadores don’t have any formal professional training, but they claim to be able to heal strained joints, backaches, and other pains. Their treatment consists of massaging the painful area, dispensing herbal medicine or creams, and sometimes providing advice on diet.

A Family Tradition
An older family member usually teaches a sobador how to massage through an informal apprenticeship. That is how 52-year-old Pedro Granadas, a sobador from Boyle Heights, learned. “This comes from my family, from my father, my mother, my grandfather,” said Granadas, who has been a sobador for more than 30 years.

Granadas, who was born in Aguascalientes, Mexico, decided to become a sobador after watching his father massage and heal people when he was a child. Massage became a tradition in his family. However, Granadas’ full time job is as a construction worker.

Sobadores are not unique to Boyle Heights and the Latino community. Many cultures have a tradition of healing through touch or massage, like the Thai with Thai massages or the Chinese with acupuncture.

“No matter what culture you are from, when you are sick, you want to feel better,” said Dr. Robert Krochmal, a physician who is a proponent of integrative medicine, which blends traditional healing with modern medicine. “Doctors are not the only healers that are able to help an individual empower themselves to be healthy. It is important for us to be humble and realize that while we have many amazing tools, we do not have all the answers.”

There is no state regulatory oversight of sobadores, said Russ Heimerich, a spokesman for the California Department of Consumer Affairs, though sobadores must not engage in the practice of medicine. The Legislature in 2009 created the California Massage Therapy Council to issue certificates to massage therapists and practitioners who met certain standards. “We recommend that you look for either certified massage therapist or a certified massage practitioner,” Heimerich said. “We will refer people to that council to look at (what) they should be looking for when they consider getting a massage.”

Risks along with Benefits
Though people who are ill and desperate will often do whatever they can to feel better, there are risks that come with seeking treatment from someone who is not licensed, such as a sobador. For example, your injury could worsen, and a massage could cause you to have more pain or even leave you handicapped, said Heimerich, who urged people to be careful when seeking relief from pain.

Guzmán had suffered from severe back pain for almost five years from lifting heavy luggage at work. He had gone to doctors, chiropractors, and sobadores, but none healed him. His doctor told him he would have to rest for a month to get better, but missing work is not an option for him.

Since the massages by a sobador did not heal him, he decided never to go back. “Sobadores do not feel the pain you may feel,” he said. “They are rubbing and simply say, ‘We’re almost done,’ but they do not sense the pain one might feel.”

Advocates for traditional healing point out that going to a doctor can have its risks too. “Anytime you seek help for your health, there are risks and benefits involved,” said Krochmal. “In fact, it is our job as doctors to explain such risks and benefits before initiating any treatment. It is important for our patients and the community to have trust in us, so that medical treatment is sought for concerning symptoms.”

“Traditional and western healing can come together,” adds Krochmal, a founder of Proyecto Jardin, a community medicinal garden near White Memorial Hospital, where he practices.

Sometimes people chose to visit a sobador because they don’t trust doctors and prefer to follow tradition.

Abraham Flores grew up in Boyle Heights with a grandmother who was a sobadora. He said that he goes to sobadores for certain things, such as back or stomach pain, but he goes to a doctor whenever he feels he has something more serious.

“My family feels more comfortable with Mexican doctors and going to sobadores. I, on the other hand, I’m very comfortable going with an American doctor when I really feel like something is wrong,” said Flores.

Another obvious reason people go to a sobador is because it can be a lot less expensive than visiting a doctor. Granadas said people pay him what they want to, and sometimes he doesn’t charge at all. “I began with this when I was little. People would give me 50 cents, a dollar, two dollars, three dollars, five dollars, and this was the most they gave me,” said Granadas.

But healing sessions with some sobadores can cost up to $50, depending on the seriousness of the injury.

To enhance the healing process, some sobadores also use herbs and lotions often bought at a botánica. These are retail stores that sell traditional medicines and spiritual items, such as love potions, statues, saints, prayer candles, and items regarded as having magical powers. Sobadores shop at botánicas, and so do people seeking inexpensive remedies to treat illnesses such as stomach aches and arthritis.

Ochoa, 38, continues to visit a sobador regularly even though he hasn’t fully recovered from a back injury likely caused by carrying heavy gardening equipment on his back every day. “It relaxed me when he adjusted me, and he didn’t give me any medicine,” Ochoa said.

Do you think it would be a good idea if sobadores and doctors worked together to make the healing process more efficient? Text us at (323) 834-9752 or write us at [email protected]