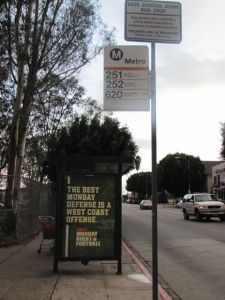 A shooting on the corner of Cesar Chavez Avenue and Mission Road Friday morning left a man dead and a woman injured. Police have identified the deaceased victim as 23-year-old Michael Rodriguez.

At around 8:15 a.m., two unknown suspects driving a car described as a dark-colored Dodge Charger fired multiple rounds at Rodriguez and a 52-year-old woman who were standing at a bus stop in the 500 block of N. Mission Road, said officer Wendy Reyes.

New information released by police revealed that the passenger suspect exited the car, walked up to the victims who were with two companions, and opened fire.

The man was pronounced dead at the scene and the woman was taken to a local hospital with a single gunshot wound. Her condition was originally listed as critical, but she is now in stable condition.

Police said it is unknown if the incident was gang-related and have no further information at this time. Anyone with information is asked to call (877) LAPD-247 or (800)222-8477.