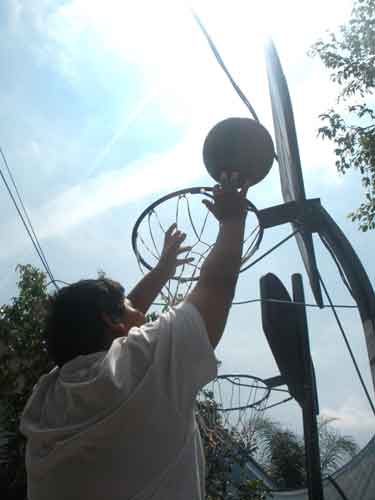 Liza Marie Samaniego, 33, goes to school and also takes care of her family of four. She doesn’t have much time to spare, yet she finds a way to volunteer as coach all week at

Evergreen Recreational Center, the park where she played as a child.

Today, the number of girls playing sports has increased, but Samaniego remembers when she was one of the few girls to play on the boys’ teams in her division.

“It was tough being the only girl,” said Samaniego. “On my team I had to do my best to be better than the boys.”

Samaniego has been a volunteer coach for more than 10 years. This is her fifth year coaching at Evergreen. Through those years, she has been coaching year-round in basketball, baseball, and soccer.

She has known most of the members of her current team, the Lakers, since they were very young, and now most of them are 11 or12.

“I do this because I want to make sure that someone I care about is being well taught and well taken care of,” said Samaniego.

Parents of the players she coaches appreciate her efforts and her decision to coach in Boyle Heights even though she lives in Echo Park. Samaniego loves coaching at Evergreen, even though there are recreation centers closer to her home.

Samaniego doesn’t just coach her team members on how to become better players on the court; she also teaches them about the meaning of sportsmanship and good conduct. She is one of many volunteer coaches who help Boyle Heights children learn to become better people.

“She’s real supportive [and] patient, with her team. It’s amazing and outstanding how there are still people like Liza who dedicate their time to volunteer like she does,” said Barbara Luevano, whose son plays on the team.

“She helps make kids more athletic and keeps our youth out of trouble. I look forward to one day being just like her in what she does,” said Luevano.

“I really appreciate her help, her friendship, and the heart she has put in to help these kids,” said Victoria Vazquez, whose son and daughter play on her Lakers basketball team.

Samaniego isn’t the type of coach to just give children a ball and a set of rules. She sometimes gets down and dirty on the gravel basketball court and puts herself into games to show the kids how to play. She uses this technique to teach the game to her players, so that they can get better by playing, not just watching.

“She has been a great role model for them. She has taught them the meaning of sportsmanship and how to work together,” said Vazquez.

Thanks to Samaniego, the Lakers went 12-0 this season and won their league championship.

Samaniego believes in preparing her team, so on game days she relies on the fact that her team knows what to do. She does, however, remind them to go out and have fun. When the team loses, she always has encouraging words.

“Don’t worry about it,” Samaniego tells them. “It’s just a game. You have all life to play more games, so don’t let one loss bring you down.”

Do you know anyone in your community who is making a difference? Tell the Boyle Heights Beat. We want to know!