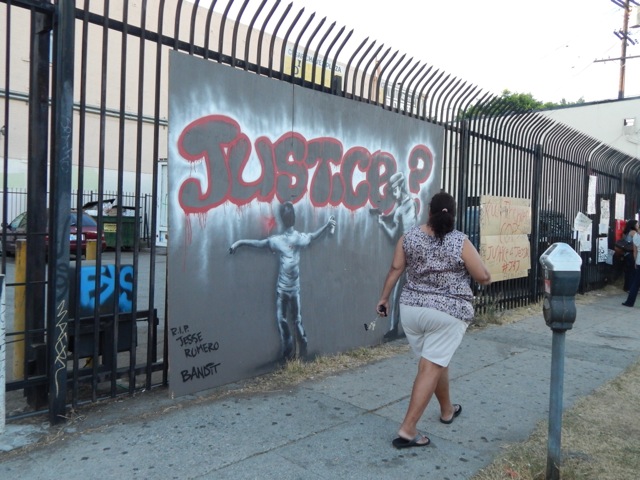 The death of 14-year-old Jesse Romero, who was shot by police on August 9, has hit the Boyle Heights community hard. Residents and activists want answers and are demanding the release of video from body cameras worn by officers when Romero was killed by police. It’s a demand that the LAPD is unlikely to willingly meet, given the department’s longstanding policy against doing so.

A heated discussion on the issue took place at last Tuesday’s meeting of the city’s Police Commission. It was an emotional meeting –the first since an officer shot and killed Jesse Romero while responding to a call about gang-related vandalism on a busy commercial corridor on César Chávez Avenue. 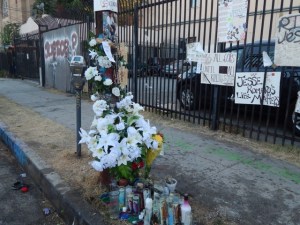 An altar was erected hours after Jesse Romero was killed.

Romero was shot  after a brief chase down César Chávez and onto Breed Street. At a press conference the day after the shooting, police said that officers heard a gunshot before they fired at Romero, who died at the scene. Police also said that a gun was recovered at the scene, and that a witness saw the young boy fire in the direction of the officers.

At the press conference police confirmed that the officers were wearing cameras, and said that the videos would be “compared to all evidence” as part of the shooting’s investigation. The LAPD has said that it does not make body-worn camera footage available to the public unless required to do so in a criminal or civil court proceeding.

But civil rights attorney Antonio Rodríguez and other activists say that a witness account of the shooting contradicts the police version. A woman who did not want to disclose her full name told The Times that the teen threw his gun against a fence and never shot at the officers in pursuit.

“Every bit of information that [the police] have should be released to the public, specifically because there are two versions to the story,” Rodríguez told Boyle Heights Beat during a protest on Saturday in front of the Hollenbeck police station.

Rodríguez said that he and colleague Jorge González would attempt to investigate the Romero case “as thoroughly as possible” before filing a civil rights lawsuit on behalf of Domínguez.

According to press accounts, Eduardo Rodríguez was shot 17 times. In July, the attorneys filed a lawsuit against Los Angeles County and the two deputies involved in the shooting.

In the city of Los Angeles, there have been 13 fatal officer involved shootings so far this year –and five have happened in Boyle Heights.

“This is a poor community,” said attorney Rodríguez.  “This is a community that is traditionally subject to over policing.”

Romero’s fatal shooting by police has sparked emotions –and heated social media conversations– in a community that has seen an uptick in violent crime in recent months. While some residents agree with activists, who blame police for overreacting, others have focused on Romero’s alleged involvement in gang-related vandalism. Many posters on social media actually blame the young man for his own death.

“Man, it was a stupid move on his part,” Facebook user Oscar Angulo Cisneros commented on a Boyle Heights Beat post. “Cops are killing for waaaayyy less and you wanna go around tagging, running from a a cop and waving a gun around?? [I’d rather have] this kid be off the streets than have a cop or random civilian hurt.”

According to the Los Angeles Times, Romero was enrolled in a gang intervention program for high-risk teens. While police have not said if Romero was involved in gang activity, several posts on social media show the teen photographed in defiant poses with his fingers held up in gang-style signals. Some of the photos are tagged with the initials TB used by Tiny Boys –one of 34 gangs known to operate in Boyle Heights.

“If we want to prevent violence in Boyle Heights we must put a stop to Gang Culture which attracts youth into a life of crime,” wrote Facebook user Michael Hudson-Medina,” who posted one of the pictures that show Romero in what is believed to be a gang pose. 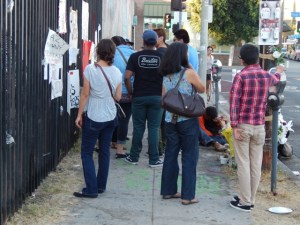 Visitors at the Breed Street site of the shooting.

On Thursday afternoon, several visitors stopped by the site on Breed Street where Romero was shot and where a makeshift altar erected hours after the killing still remains. A few steps away, a mural depicts an adult male figure pointing a gun at a boy whose arms are extended while holding a spray paint can below the freshly-painted word “Justice” followed by a question mark.

Visitors took pictures with their cell phones; some signed cardboard signs hanging from a fence behind the altar. A small sign taped to the altar advertised a nearby store that is selling T-shirts to help Romero’s family pay for his funeral. The shirts are printed with a picture of the teen and the words “Justicia para Jesse Romero” (Justice for Jesse Romero) and the dates of his birth and death.

Other activities are being planned to raise funeral funds, including a gofundme page started by a relative, with a goal to raise of $9,000. If Romero is buried next week, the funeral may coincide with what would have been his 15th birthday, on Aug 24.

Photo above: a resident walks past a new mural depicting the police shooting of 14-year-old Jesse Romero. All photos by Antonio Mejías-Rentas