A resolution passed by the Los Angeles Unified School District (LAUSD) in support of a more inclusive school environment may lead to a brighter future for LGBTQ+ students throughout Los Angeles, community leaders say.

Scores of students, parents, teachers and activists rallied last month in front of LAUSD’s downtown headquarters in support of the “Increasing Supports for LGBTQ+ Students, Their Families and Schools” resolution.

For over a year and a half, organizations including the Latino Equality Alliance, GSA Network, One Archives, and Out for Safe Schools crafted the resolution along with LAUSD board member Ref Rodríguez. 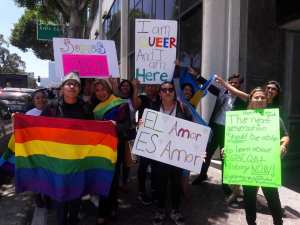 Students, parents, and other community members rally in front of LAUSD’s downtown headquarters in support of the resolution.

“We are so proud of our LGBTQA Youth Council student leaders for their collaboration and input with Dr. Ref Rodriguez’ team in drafting [the] resolution,” said Juan Castillo-Alvarado, the Director of Public Education at Latino Equality Alliance.

The resolution calls for more inclusive textbooks for history and social science classes, increased competency training for educators and staff, recognition of October as LGBTQ+ History Month, an analysis of the viability of single-user, all-gender school restrooms, as well as the inclusion of LGBTQ+ information and resources on the LAUSD website.

Four students, one teacher, and two parents spoke in front of the Board of Education. Axel Ortega, a transgender Garfield High School student, spoke about a situation in which a teacher refused to call him by his preferred name. 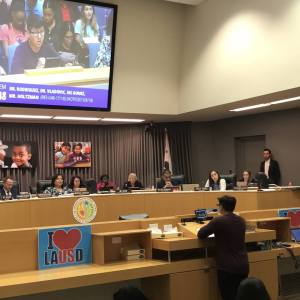 Student Axel Ortega speaking before the LAUSD School Board.

“The teacher was calling out everyone’s name and then I heard my birth name called out several times,” says Ortega. “Of course, I didn’t respond. I was the last one standing and I just wanted to break down and run out. I had to go to every one of my teachers and ask them not to call out my birth name.”

Emily Grijalva, a teacher at Felicitas and Gonzalo Mendez High School, says she was never encouraged by school administration to include LGBT history or writers into her class curriculum.

After the testimonies, LAUSD unanimously passed the resolution. Recently elected LAUSD superintendent Austin Beutner plans to report back to the board within two months with recommendations on the best way to implement the resolution.

“In light of increased hatred, homophobia and transphobia that our communities are experiencing, we are hopeful that that the LAUSD Board of Education’s unanimous vote of approval will send a strong and clear message that Trans and Queer students are supported, valued and celebrated,” said Castillo-Alvarado.