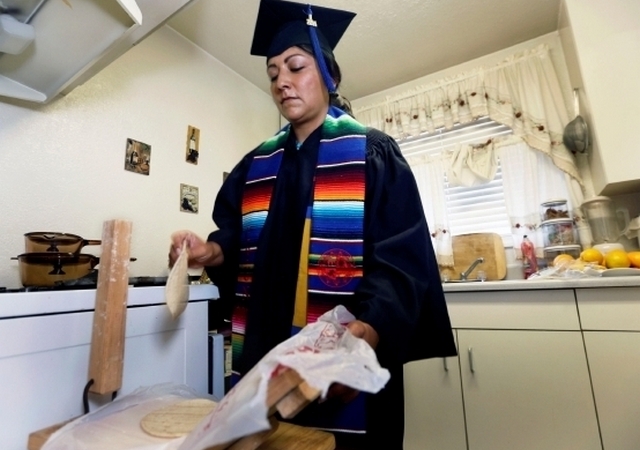 This story was originally published in La Opinion

Selling tortillas on weekends to pay for college was one of the many things that Raquel Román had to do to get her degree in Chicano Studies from California State University at Northridge (CSUN ) this month.

“It was not easy,” says the 33- year-old daughter of Mexican immigrants, who had to make and sell tortillas using social networks to earn about $120 per week and offset the cost of gasoline I took to drive to CSUN.

“Working with homeless people made me realize that if they, despite their situation, believe in themselves, I had to believe in myself and that I could do it,” Román shared.

She’s referring to her work with Proyecto Pastoral at Dolores Mission, where she assists the homeless in Boyle Heights since 2008, and has become the first female director of the Guadalupe Homeless Project.

“Their strength inspires me to pull through. Most of them are immigrants who came to achieve a dream and are still looking to achieve it,” she said. “That motivated me to pursue my own dream of becoming the first college graduate in the family.”

But the road Roman had to travel to get to this point brought forth many obstacles which forced her to stop and at times, even prevented her from continuing.

She graduated in 1998 from Huntington Park High School with a high GPA and was accepted at CSUN. However, university policy EO665, then enforced in California State Universities, prevented her enrollment at this institution because she did not meet the competency requirements in mathematics.

“I, like many Latino students, did not have the math requirements necessary to go to college. And that law forced many to abandon the idea to continue with their studies,” she said.

At that point, she decided to look for a job, as she had to support herself.

Finally in 2010, after several failed attempts, she found in East LA Community College ( ELACC ) a teacher who was able to help her pass the required math and algebra. She was then able to transfer to CSUN and complete her goal.

After much struggle, “I felt like I had won the lottery,” Roman said, recalling her reaction when she learned she had been readmitted to the university.

“I’ve had to sacrifice a lot. But I come from a family of strong women; my grandmother, who was a single mother and my mother too. They have been my inspiration to fulfill this dream,” she said.