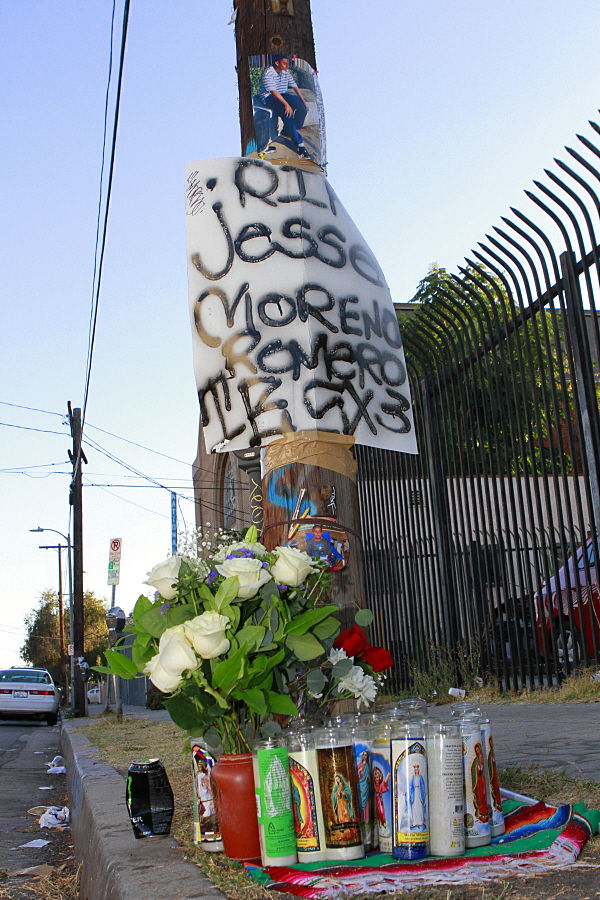 The police officer who shot and killed 14-year-old Jesse Romero in August had killed a man 12 days earlier in an officer involved shooting in Boyle Heights.

KVEA Telemundo reported on Friday that the Los Angeles Police Department had identified the officer who shot Romero as Edén Medina, the same officer who had shot 36-year-old Omar González on July 28.

KVEA reported that officers involved in shootings are allowed to return to the field with the LAPD chief’s consent, after a briefing with command staff and a psychological evaluation –a process that takes at least three days.

The LAPD confirmed that Officer Medina was back on the field six days after he shot González, and that he had been the officer who pulled the trigger and killed Romero in an incident that has sparked outrage in the Boyle Heights community.

Romero’s mother, Teresa Domínguez, told KVEA that Medina should not have been allowed to return to work after the first fatal shooting.

“[I’m feeling] much anger,” Domínguez told the TV station in an interview at her Boyle Heights home. “Why did they let him go back to work if he had just killed someone?”

The LAPD did not respond to KVEA’s request for comment on the shooting incidents which are under investigation.

Police have said that in the July 28 incident, Officer Medina shot González after the man fought with officers and produced a handgun. The man was a passenger in a vehicle that police suspected had been stolen. Gang Enforcement Officers from the LAPD’s Hollenbeck station attempted to stop the vehicle, the driver fled into a nearby residential and stopped in a cul-de-sac on Atwood Place. The passenger got out of the car and ran to the driveway of a home, where residents attempted to stop him.

“The suspect fought with the officers, causing them to fall to the ground and the struggle continued,” police said in a statement. “The suspect was then seen armed with a loaded .25-caliber semi-automatic handgun.”

Medina then fired two rounds striking González. He was taken to a nearby hospital where he died. No officers were injured in the incident.

In the Aug. 9 incident, Gang Enforcement officers responded to a vandalism call near on César Chávez Avenue. As officers approached the teens for investigation, Romero fled and turned onto Breed Street. Police said that as officers approached Romero, they heard a gunshot and saw Romero fire a handgun at the officer. In a Sept. 14 news release, police said that one of the officers saw the teen “crouched on the sidewalk with his right arm extended toward the officer.” That officer then shot Romero, who was declared dead at the scene.

Since then, at least one witness has said that Romero did not shoot at officers but rather threw his handgun against a fence, where it went off accidentally. A recently divulged video shows police picking up the handgun several feet away from where Romero was shot and on the other side of that fence.

Activists say that the video contradicts the LAPD’s account of the shooting and have demanded that the department release video from officer worn cameras. They had also asked for the release of the name of the officer who shot Romero.

The LAPD released Edén Medina’s name about a week after the July 28 shooting of González, and said he had been in the force at least 5 years. It is unclear when the department confirmed that Medina was the officer involved in the Aug. 9 shooting of Romero, or why it took over a month to divulge his name.

The LAPD has not indicated if Medina is on leave or if he has returned to the force, but in the television interview Romero’s mother said the officer should be terminated and prosecuted for her son’s killing.

“He should be fired,” Domínguez said. “He should not be working because he’s an assassin.”

This is the news story, in Spanish, broadcast by KVEA Telemundo on Friday, Oct. 14: