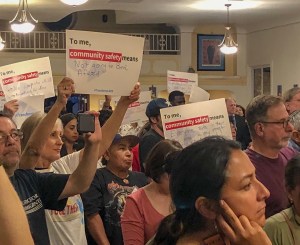 The new Los Angeles chief of police held a public forum Thursday at Dolores Mission Church, where he addressed a number of issues brought up by community members.

According to KTLA5, the recently appointed Michel Moore has made public forums such as the one in Boyle Heights one of his priorities. The outlet said the LAPD chief recognized the department’s strained relations with minority communities, due to racial profiling and excessive use of force.

“My commitment to listen tonight is to hear how do I improve that message even more through actions,” Moore told KTLA5. “What actions can we take as an organization, can we take as a community, to ensure that people truly believe that this is the best place to live.” 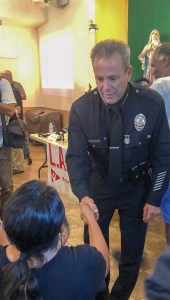 The forum was hosted by LA Voice, an inter-faith community organization that “awakens people to their own power, training them to speak, act, and work together to transform our County into one that reflects the dignity of all people,” according to its website.

Throughout the evening, attendees asked Moore about immigrant rights, justice against discrimination and homelessness in Los Angeles, among other issues.

LA Voice live-tweeted many of Moore’s comments and the commitments he made as he responded to questions.

Racial justice was a major theme of the community event. At one point, LA Voice tweeted that “LAPD agreed that hate crimes will be fully investigated. LAPD will not tolerate force that tarnishes the badge. LAPD will be held accountable by the public.”

“LAPD agreed that hate crimes will be fully investigated. LAPD will not tolerate force that tarnishes the badge. LAPD will be held accountable by the public.” @LAPDChiefMoore #lapd @losangeles

When asked about relations with undocumented immigrants, Moore stated that he would not “work with ICE without a warrant” and that under his watch there would be no “racist policing.”

LAPD will not work with ICE without a warrant. LAPD will not tolerate tarnishing the badge which means harassing individuals and/or racist policing. @LAPDChiefMoore #transformlapd

Moore also addressed relations with the Muslim community and the issue of homelessness, saying it’s “not a police issue [but] a humanitarian issue.”

As the community event closed, Moore himself took to Twitter to express his gratitude for the meeting and the hope for a new relationship and progress within the community.

Humbled to join @LA_Voice tonight to help set the tone of my ears and listen and build trust— The trust in me and the trust in some 13000 men and women. We have much work to do and we have more in common than anything that can pull us apart. Let’s get to work pic.twitter.com/Y6Wz7q4El4

This post was edited on July 15 to correct Michel Moore’s name.