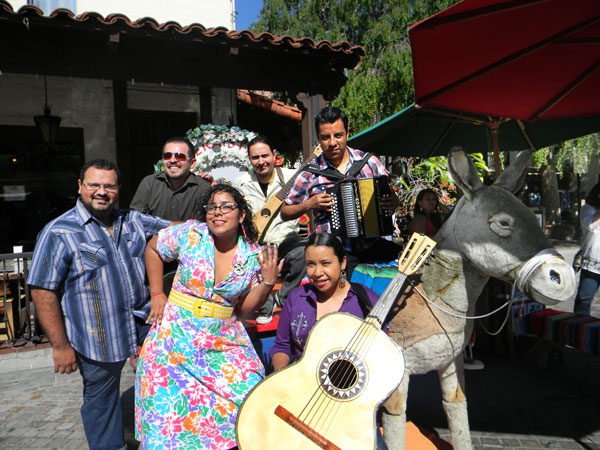 We congratulate La Santa Cecilia for their Grammy win Sunday night in the “Best Latin Rock, Urban or Alternative Album” category for their album “30 Días.” Below is a story written by Boyle Heights Beat youth reporter Diana Arellano in 2011.
On a hot evening at La Placita Olvera, La Marisoul belts out an upbeat, Mexican cumbia as people gather for a surprise performance by La Santa Cecilia, the up-and-coming band. As the chatter lessens and the show begins, vendors and bystanders alike seem captivated by the unique mixture of traditional Mexican ballads, jazz, rumba and even Jewish klezmer music.

The lyrics can be heard clearly: “Cuando la luna sale a brillar todo puede suceder” (“When the moon shines, anything can happen.”), from the song “La Negra.” The sound of an accordion recalls a norteña band, yet the beat is that of a cumbia. The song continues: “Que la lujuria y el deseo son dos fuegos que queman aquí”(“Lust and desire are two fires that burn here.”)

La Santa Cecilia came together as a band in September 2007 and consists of six local musicians. All are children of immigrants. Besides La Marisoul, who uses just one name, the band includes Gloria Estrada, guitarist, who is from Boyle Heights; José Carlos, accordionist; Alex Bendana, bass player; Miguel Ramírez, percussionist; and Hugo Vargas, drummer.

La Marisoul and Carlos met in La Placita Olvera where La Marisoul spent many hours of her childhood. The others soon joined, united by the desire to create a new type of music.

”We all agreed we wanted to make our own music [by] using influences like traditional music and mixing it with whatever we wanted to experiment with,” said La Marisoul.

Each band member brings different rhythms and influences to the band’s sound ”“ from the Beatles to Café Tacuba to Ella Fitzgerald.

Estrada, who grew up across the street from the Estrada Courts in Boyle Heights, credits the vibe in her neighborhood with spurring her interest in music. The neighborhood was always alive with music from other homes or cars or from parties. “It’s funny, like everyone’s broke in the projects, but every Saturday you see them renting DJ lights. There’s always money for a party,” said Estrada.

The band hopes to break down barriers between genres, ages, and even cultures.

“When you’re in high school, you say I’m punk rock [or] a rockera, and you’re very [serious] about that. But I think that now that we’ve gotten a little older, we just [want to] celebrate all the things that we like [in] all the different genres,” said La Marisoul. “We play and say proudly, I love Rock ‘n’ Roll, but I love banda too.”

The band members say it doesn’t matter what people want to label them, as long as they embrace their music.

The band chose the name La Santa Cecilia in honor of the patron saint of musicians, whom Catholics celebrate each year on November 22. Besides wanting to honor the saint, La Marisoul said the band wanted a strong name.

Each band member sometimes works with other bands, sometimes playing other types of music or shows, They all make a living from music.

A little more than a year ago, the band sign with Rebeleon Entertainment, a record label founded by Sebastian Krys, an Argentinian-born producer and engineer who has won multiple Grammy Awards.

The members said that signing with the label has not changed their lives. Everyone in the band still does what he or she did before, from updating the band’s Facebook page to bookings. They all do their parts and feel like they are doing what they love.

“When you like what you’re doing, and you’re having fun, it’s like hell, yeah, we get to play tomorrow and hang out. People are going to come and we are going to play music,” La Marisoul said.

Originally published in May 2011
&nnbsp;