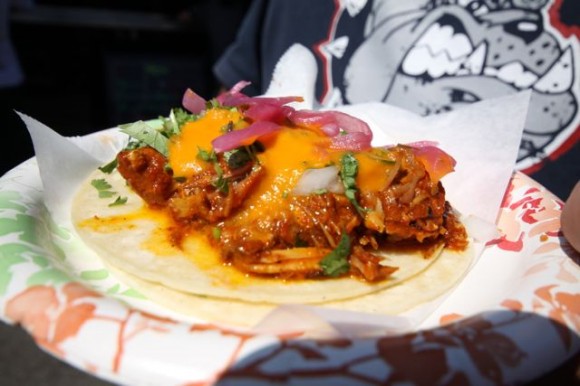 The mood was festive and the tacos were flying at the 2012 L.A. Taco Festival last Saturday at Mariachi Plaza in Boyle Heights.

The event, which according to organizers, drew nearly 7,000 people, featured several Southern California taco restauranteurs with local favorites such as El Tepeyac and Tacos El Gallito, attracting taco lovers from as far away as Burbank, Torrance and Orange County.

Tacos of all varieties, including carne asada, carnitas, papa, al pastor, pollo, camaron and barbacoa filled the air enticing customers to line up for their favorite dishes, or to try something new.

Guadalupe Alvarez has been living in Boyle Heights for 26 years, and is no stranger to good-tasting tacos, she says.

“I’m very familiar with good tacos having lived here most of my life, but I couldn’t miss this,” said Alvarez, in her native Spanish language. “It’s good to have something like this here in Boyle Heights.”

“I don’t feel like I’m in Boyle Heights right now; it feels like I’m in a trendier part of town,” said Gabby, noting the event drew many people from outside the community.

Annette Carrion made the trip to the eastside from Torrance for her first visit to Mariachi Plaza after she heard about the event on Fox 11’s “Good Day L.A.”

“I saw that El Gallito would be here, so I had to come. I love their tacos,” said Carrion.

But tacos were not the only attraction revelers came to experience. The crowd grew as performers such as Las Cafeteras, Trios Los Machos and an impromptu group of young dancers joined the festival.

The event was organized by Jovenes Inc., a Boyle Heights-based non-profit organization that works with homeless youth. Sponsors included La Opinion, The Fifteen Group and La Barca Grill and Cantina, among others.

Gus Ugalde is a print journalist and Boyle Heights native. He is a graduate of both Salesian High School and East Los Angeles College. With writing as his passion, he has had over 500 stories published at several publications throughout Southern California.