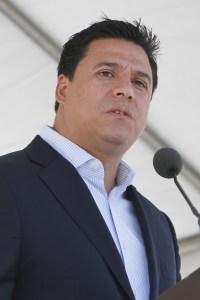 The documents, filed last week, serve as a formal response to Godoy’s lawsuit. In her suit against Huizar and the city, Godoy alleges her workplace benefits were predicated on a sexual relationship with the councilman.

Godoy alleges Huizar asked for sex in exchange for his support in her campaign for a Los Angeles Community College Board seat.

She claims the councilman waged a “campaign of retaliation” when she refused his advances, and was later banned from the office and forced to quit.

Huizar admits he encouraged Godoy to run for political office, and initially told influential people to support her.

Huizar, who has previously admitted a consensual sexual relationship with Godoy, denies she was forced to leave her position as Deputy Chief of Staff, or that Godoy was subject to any sexual harassment or retaliation.

Upon leaving his office last year, Godoy was making more than $132,500 as a top deputy. She was transferred to the Bureau of Sanitation, where she currently earns a salary of more than $117,000.

Huizar, who represents Boyle Heights, other parts of the Eastside and downtown is married and has four children. He is up for re-election in 2015.