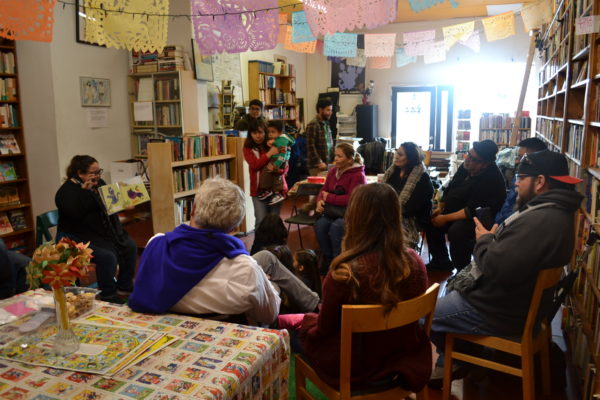 I will never forget the day Malia met Little Chanclas. It was a Sunday afternoon last year.  I was very excited to take my daughter to the Children’s Storytelling Hour, which happens the last Sunday of every month at Libros Schmibros, the wonderful lending library at Mariachi Plaza.

On this particular February Sunday, author José Lozano was going to read to the kids one of his books. One which happens to be one of my daughter’s favorites, “Little Chanclas.”

We came into the library, there was a table set up with cookies and they announced there would be a raffle. Soon enough another little girl showed up. It took the two girls a moment but, before we adults knew it, together they walked over and started exploring the books on the shelves together.

After a couple of more kids arrived, the time had come for Lozano to read. The kids settled in and he read to them, in English and in Spanish. All the kids were very engaged in the adventures of Little Chanclas (a girl who gets that nickname from her favorite flip-flops). Once the story was over, it was raffle time!. Lozano called out names and my daughter was one of the last to be called. She won a drawing of Little Chanclas that the author drew on the spot. Full of excitement, Malia walked over to collect her prize. She took it and turned around to look at me, with the most accomplished look on her face. She was so excited to have this drawing be her own.

Then the kids gathered around the table and Lozano started a little art workshop for the kids. They were making their own Little Chanclas, with words on the back that signified what they wanted to be when they grew up. Fifteen to 20 minutes into the project, as kids were wrapping up, Malia was not happy that her adventure, much like Little Chanclas’, was about to come to an end. Afterwards, Malia took her book to school and her teacher read it to the class. Now, Little Chanclas has a whole Kindergarten class in Boyle Heights learning about her adventures.

For children and their parents, time with other kids from the community is invaluable. This is how our kids learn about community, and having an author come in that isn’t from the area, only shows them how big and full of opportunity this world really is. As a mom who is raising her young daughter in Boyle Heights, I urge you to take your kids to the Children’s  Storytelling Hour – or “La hora de cuentos”– for a Sunday of stories, books, new friends and curious little adventures.

And check out Libros Schmibros’ recently opened new digs at the former Boyle Hotel, next door to La Monarca bakery, across from Mariachi Plaza where the lending library was previously housed.

The Children’s Reading Hour takes place the last Sunday of every month, at 2 pm, free for children two and older and their families. The next scheduled reading hours are March 25 and April 29.