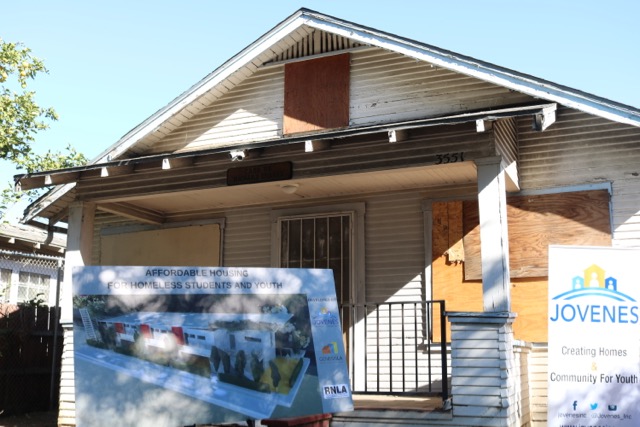 A former single-family home in a large city-owned lot near the Indiana Gold Line Station will be converted by Jóvenes Inc. into single apartments for homeless college students.

The Boyle Heights nonprofit –which provides temporary and permanent housing for homeless youth– is acquiring the property  in partnership with another nonprofit, Restore Neighborhoods LA. Together, they were the single bidder for the property, Councilman José Huízar said at a press conference Thursday. The early 20th-century bungalow on 3553 East 4th Street once bore the name “Casa de Richard Chávez “ and had been, at some point, converted into a larger two-story complex with parking space in the back of the lot. The property, which is close to various modes of public transportation and popular eateries, had been vacant for years.

The abandoned house is on a heavily transited stretch of 4th Street near a 60 Freeway off-ramp and a spot where flower vendors offer freshly-cut bunches on the weekends.

Jóvenes Inc. and Restore Neighborhoods LA –an affordable housing developer– will build the units in partnership with Genesis L.A.  They will use private capital and donations to develop the project more quickly and at a lower cost than traditional developments, the city said in a press release.

The units will become permanent housing for homeless youth going to college or enrolled in other post-secondary educational opportunities as part of Jóvenes Inc.’s College Success Initiative. When occupied its residents will be able to walk to a stop for a Metro shuttle bus to East Los Angeles City College, which is six miles away.

At the press conference, Jóvenes Executive Director Andrea Marchetti said it is too early in the development process to tell precisely how many units would be built on the 4th Street lot. He described them as “micro apartments” that would be “age appropriate” but in keeping with Jóvenes tactic not to concentrate “a lot of youth in one spot.”

He said the nonprofit is still negotiating the terms of its agreement to acquire the property from the city, but predicted the first tenants would be able to occupy their apartments in 12 to 15 months. “We have pretty straightforward financing already in place for this project, so it will not be three or four years,” Marchetti said. “Having an agreement with the city allows us to focus just on the construction, not the acquisition of the land.”

Huízar said he expected no community opposition to the project proposed by Jovenes, which he described as “a good operator.

“The idea of providing homeless housing in neighborhoods like this is that we want to make it like any type of housing,” the councilman said. “Somebody walking by doesn’t know the difference if it’s an apartment or a housing complex for formerly homeless youth.”

Huízar announced the City Council will vote on his motion to allow Jóvenes Inc. to negotiate with the city to additionally acquire the so-called Aliso Triangle, a swath of green space in front of the Pleasant Avenue cul-de-sac where the nonprofit’s headquarters are located. Jóvenes Inc already owns most of the properties on the cul-de-sac, which have been converted into transitional or permanent housing for the homeless population it serves.

Huízar said the Aliso Triangle is one of several public properties the city is looking to convert into housing for the homeless with funds from last year’s Proposition HHH bond measure. The councilman said four such properties in his district included the Aliso Triangle and two city parking lots near the César Chávez business corridor.

But Huízar insisted that Boyle Heights historically has welcomed the development of housing projects for the homeless, and that moving forward in allocating Prop HHH funds the city will have to look at communities that have not.

Asked about his opposition to a nearby development of an apartment complex to house mentally ill homeless and low-income veterans, Huízar said the project on First and Lorena Streets lacked “a good community process” and “a good operator”.

Although First and Lorena remains stalled in the planning committee he chairs, Huízar said it would  come to full council vote “some time.”

This post was updated on 11/9/17 to add comments by Andrea Marchetti and José Huízar.