Joel García –the artist who was in charge of programming at Self Help Graphics and Art during a period of growth and critical recognition, but was recently the target of attacks by anti-gentrification groups in Boyle Heights– has left the venerated local arts organization.

A spokesperson for Self Help Graphics (SHG) confirmed that García left his post as co-director of programs and operations in late July but would not offer other details, explaining that Self Help does not comment on personnel matters. She added that García had been at Self Help seven years during which he “contributed to the growth of the organization” 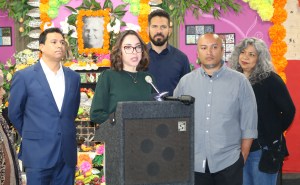 On Tuesday, SHG announced that it was promoting Betty Ávila to the new post of executive director. Ávila, who had been co-director of advancement and administration alongside García, had been named acting director upon his departure.

In a press release, the organization said Ávila’s new post was effective July 30. The release does not mention García.

“The Board of Directors [is] excited to advance Self Help Graphics & Art mission with Betty Ávila as executive director, an innovative leader in vision and process who is rooted in the community we serve,” SHG board president Endy Bernal said in the release.

“It’s an honor to be named executive director of… the organization that reflected me and my culture and gave me the affirmation I needed to pursue a career in the arts,” Ávila said in the release. “I look forward to continuing to amplify our mission, the Chicana/o and Latinx narrative through printmaking and the arts, and promoting culture through practice and policy with our dedicated staff and community of artists.”

García did not respond to Boyle Heights Beat’s request for comment on Wednesday.

A graphic artist and illustrator with a background working in the music industry, García joined SHG in 2011, a couple of years before the organization moved from East Los Angeles to its current headquarters to Boyle Heights. In April, the organization announced it had paid $3.6 million to acquire the former seafood processing plant on East 1st Street where it is housed –becoming one of a handful of Latino arts organizations in the United States with its own building.

Among his achievements, García produced and oversaw the organization’s annual Día de los Muertos celebration, which became the subject of an exhibition that was part of Pacific Standard Time LA/LA, in late 2017 and early 2018.

But García was called out by anti-gentrification activists related to the group Defend Boyle Heights, who called for a boycott of SHG.  They said that under García’s leadership the organization had aligned with art galleries, developers and other institutions that were contributing to the potential displacement of low-income renters in the neighborhood.

In an interview with Boyle Heights Beat in 2017, García countered the accusations by saying that, as a community based organization, SHG was also against gentrification.

Self Help Graphics “was founded because there hasn’t been space for artists of color in those galleries,” said García.  “So, why would we work with entities that do not want us there. We don’t work with any of those galleries, and they don’t want to work with us.”

Photo above by Saúl Soto for Boyle Heights Beat.

This post was modified on Aug. 9 to reflect the correct date in which Ávila’s new post was effective.