The walls in classrooms and halls at the Math, Science and Technology Magnet Academy at Roosevelt High School changed from one day to another last December, when volunteers began passing out what appeared to be a new poster for United Teachers Los Angeles. Little did students know that the person featured on the new teachers’ union poster was their own history and ethnic studies teacher. 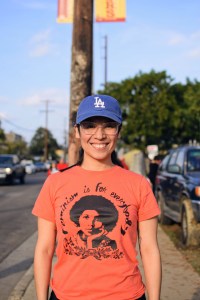 “I became a teacher because the system does not work for everyone and  we have to transform it into something that does.”

“Seeing  Ms. Dueñas’ face plastered all over this protest is amazing,” exclaimed Héctor Ruíz, a 17-year-old senior at MSTMA. “She is literally one of our best teachers on campus.”

For Dueñas, who grew up in Boyle Heights and who herself experienced the inequality of education as a student at Garfield High School in East Los Angeles, newfound notoriety came with a casual phone call during the Thanksgiving break. Boyle Heights artist Ernesto Yerena –who had done art workshops for some of Dueñas’ classes– asked her to briefly pose for one of several posters being created for the UTLA campaign.

Interviewed during a teacher’s protest at Roosevelt last week, Dueñas recalled that she was on her way to the gym when Yerenda called her. She agreed to stop by the artist’s studio after her workout and decided to go without makeup and in a flannel shirt –the kind of look she would wear at work. On the poster she appears wearing glasses and with her hair simply parted at the side.

Dueñas has taught at Roosevelt nine out of 11 years at LAUSD, but this is her second year at MSTMA. In 2014 she was one of three teachers who created a “Boyle Heights in Me” course that included some of the history of activism in the neighborhood. (In 2016, Boyle Heights Beat reported that the 9th-grade course satisfied a new ethnic studies requirement imposed by the district.)

Dueñas did not realize how much she had missed in her own high-school education until she went away to college and took women’s and Chicano studies courses at U.C. Santa Barbara.

“When I was in high school we did not learn Chicano history, Mexican-American, Latin American history,  so for me I thought that would be really cool to go back to my school and community and teach about the things that I would have liked to learn that feel really empowering, engaging and exciting,” she said.

Listen to part of the interview with Dueñas:

As a college student, Dueñas realized that schools in poor, Latino neighborhoods like Boyle Heights were not given the same resources as schools in more affluent neighborhoods.  “The idea that they were overpopulated and underfunded really exposed me to the systematic inequality that exists in our schools,” she said.

She also learned about the so-called tracking system, whereby high school students are separated by academic ability and the school population is assigned to classes according each student’s measured ability.

After completing a Masters in Education at UCLA, Dueñas decided to return to her neighborhood as a teacher, motivated by the challenge of giving “quality education to all students… not just [those] in AP and honors classes, because I felt like everyone deserves the opportunity at a quality education.” 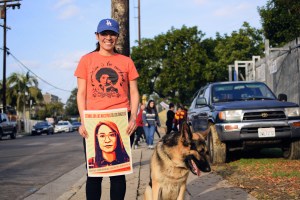 A sudden celebrity on the picket line, Dueñas said she and the other teachers have been overwhelmed by the support from community members. “Parents, students, complete strangers who have reached out to figure out how they can support, whether it is just through their kind words, donations of food, whether it is joining us at the picket line… I could have never imagined how supported we would feel, because it is a very challenging thing to be out here day in and day out, in the pouring rain, and I am unbelievably blown away by how the community has come together to demonstrate their support for public education.”

Dueñas said the teachers’ strike was an opportunity to call attention to the persisting inequality in some district schools.

“I became a teacher because the system does not work for everyone and  we have to transform it into something that does,” she said while on the picket line. “This is an opportunity to ask and demand of the district, of the state, to fund schools that really help everyone, not just pockets of students that maybe are  going to be successful no matter what.”

“I see this as an opportunity to engage in what I thought about when I just became a teacher, which was to transform schooling into something that is uplifting and empowering.”

Several Roosevelt students who joined the picket line said they were inspired by Dueñas.

“Seeing Ms. Dueñas in the poster, seeing our own teacher, it is really inspiring to know that teachers in low-income communities can make an impact in the larger scale,” said Marlene Galicia, a 17-year-old senior. “Being part of the UTLA protest and being a role model, knowing she came from the same background as us.”

Ángel Rolón, a 16-year-old junior who is one of several of Dueñas’s relatives who go to the Roosevelt magnet, said he is “extremely proud” of his cousin.  “Seeing her on the poster and being able to achieve what she has been achieving throughout this whole process of the strike, is actually impactful on me and my family.  We are extremely proud and can’t wait to see what she does in the future.”

Dueñas in turn said she gets her inspiration from the students.

“Sometimes the students literally say, Ms. Dueñas, you have to be brave.’  When I see they have their own personal issues and they show up and try their best, just seeing them live their life, just reminds me that I am capable of doing what they are able to do as well.”

All photos by Óscar Vargas.