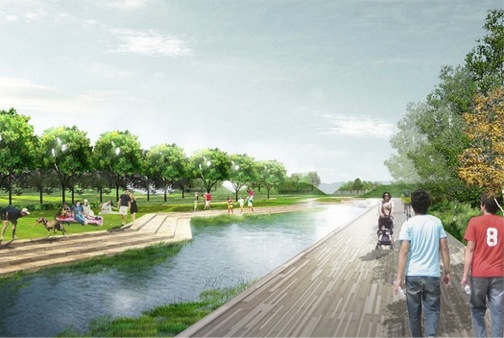 Children living in an affordable housing complex next to the Union Pacific tracks enjoy counting the trains that pass just a few feet from their homes. Frequently, the engineer waves back at them, sounding the loud train horn.

The proximity of the rail line is just one indication that this is not a typical neighborhood. Nearby factories puff out thick white smoke. And 18-wheeler trucks spew diesel fumes when they load goods that are transported all over the country.

Unknown to most of the families in this community, environmentalists and urban planners have an ambitious plan to transform the rail yard into a ribbon of green that will connect Boyle Heights to downtown L.A. Several architecture firms have donated their architects’ time to work together to design a 125-acre park with soccer fields, walking and biking paths, a sculpture garden, playgrounds, picnic areas and a community center.

“Hopefully, if we accomplish what we are trying to do ”“ and we are still a long way away from accomplishing it ”“ it will weave in Boyle Heights and the USC Medical Center into the center of the city,” said Lewis McAdams, founder of Friends of the Los Angeles River. “There will be a huge park between Union Station and the river.”

The rail yard has a picturesque name, Piggyback Yard, which comes from the fact that containers “piggyback” on both the trains and the trucks. Also, McAdams notes, “if you go down Mission Road, you’ll see that there’s still an old neon sign that brought up the golden pig, so it’s kind of a joke on the railroad.”

The transformation of Piggyback Yard is still just a hope and a dream because of the high cost and the major challenge of persuading the current owners of the space, Union Pacific Railroad, to move its rail yard.

Not for sale
“Union Pacific currently has no plans to relocate the yard,” said Aaron Hunt, a spokesman for the company. “The yard is used to assemble trains that are headed to various destinations. The intermodal containers we ship from this yard carry the products Californians use in everyday life, from condiments to consumer electronics.”

Even though the large piece of land is not for sale, L.A. River officials are going ahead with their plans. 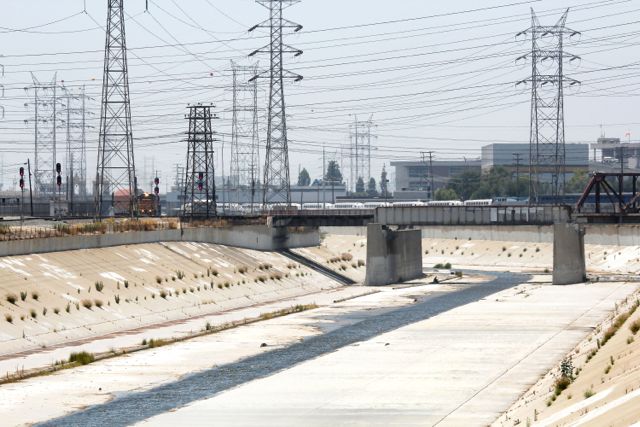 A view of the Los Angeles River near the border between Boyle Heights and Lincoln Heights. / Photo by Jonathan Olivares

If the rail yard is transformed into green space, it could change the lives of community members in Boyle Heights and Lincoln Heights.

Boyle Heights, with a population of almost 90,000, has fewer than 10 parks, according to the Department of Parks and Recreation. Its central park, Hollenbeck Park, which opened in 1892, once spanned 21 acres. But the construction of the Golden State Freeway (Interstate 5) reduced the park to 18.3 acres.

Too few parks
“Parks are important in a community like Boyle Heights, because in my opinion Boyle Heights is overpopulated, and green space is really important for me,” said Arthur Torres, a member of the Boyle Heights Historical Society, who was five years old when the freeway was built.

Councilman José Huízar agrees that Boyle Heights needs more parks to create a healthier neighborhood than the one currently dominated by freeways and industry. “What we are hoping to do in the future with the river is to develop more park land, more recreational use and access to the water,” said Huízar.

The goal of the project is to provide a space where kids can run and play soccer, while adults relax and spend their leisure time.

One element of the plan would explore ways to capture rain water to reuse, said Omar Brownson, executive director of the Los Angeles River Revitalization Corporation.

“More and more people are realizing that things that we turned our backs on, like the L.A. River, are really the front door,” said Brownson. “We need more open space. We need more park land. We need more spaces to recreate.”