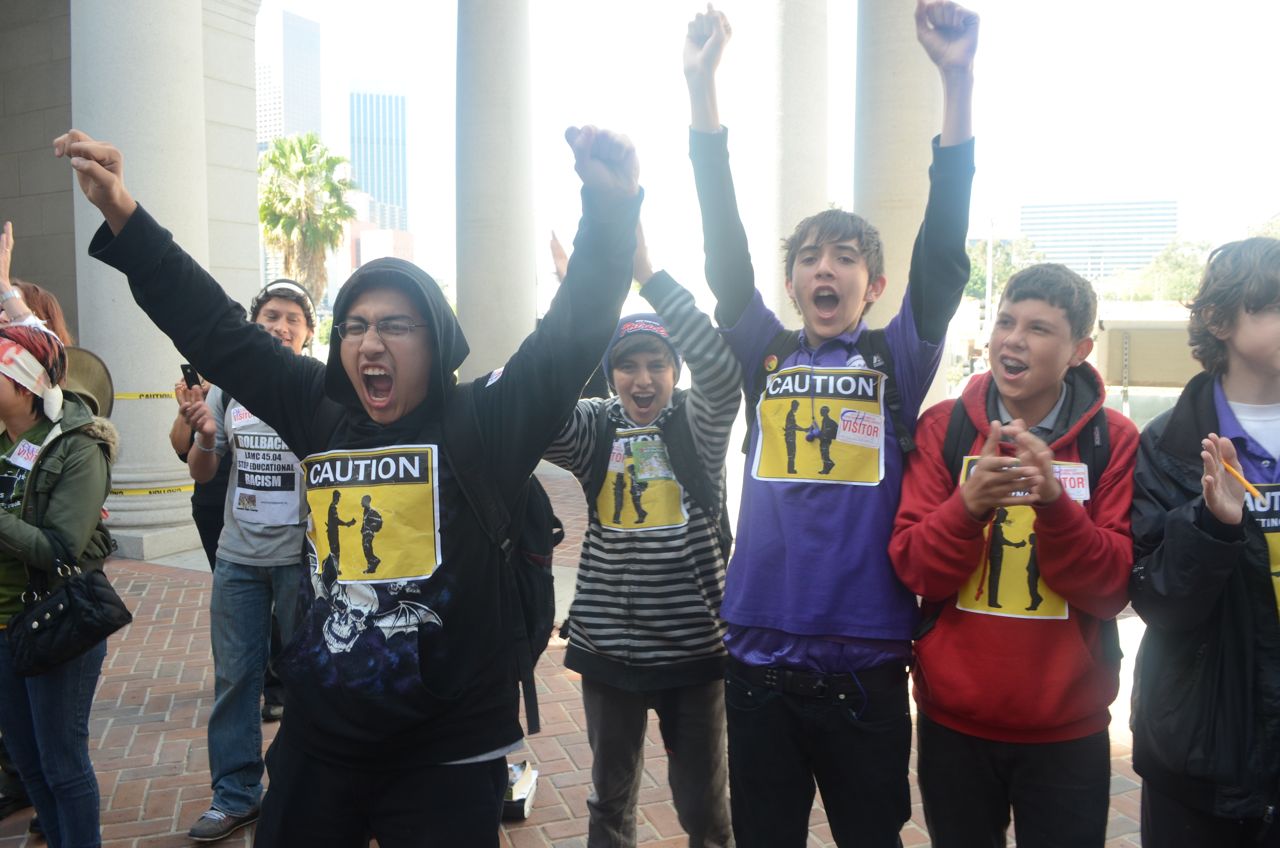 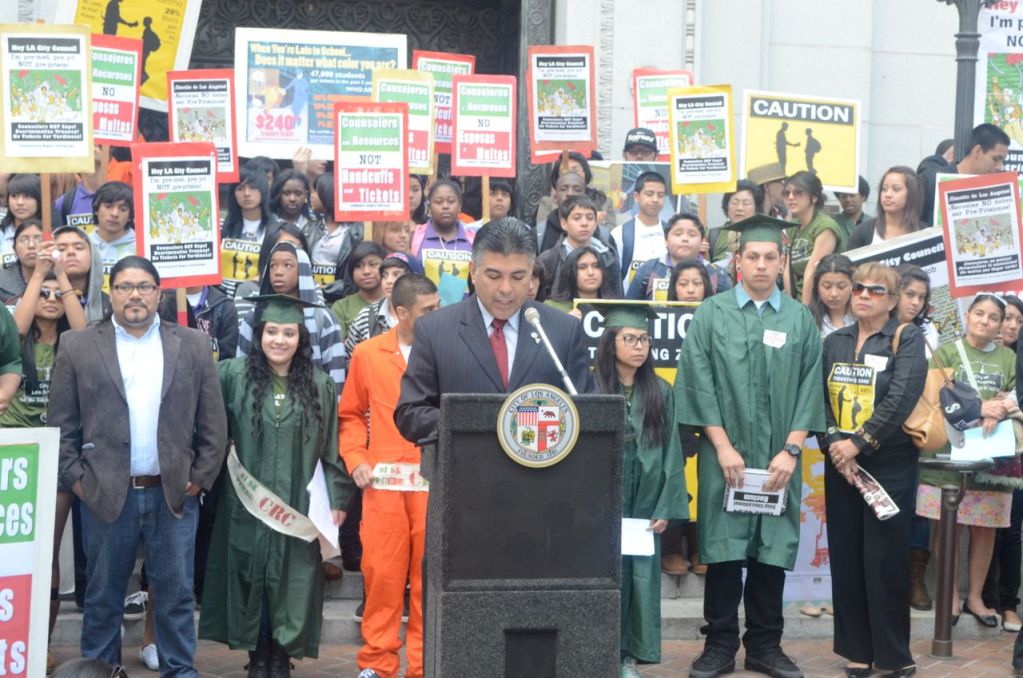 It was a jubilant scene last month outside L.A City Hall when a crowd of eager high school students waited to hear if their hard work had finally paid off.

For months they had blared chants ”““Justice not tickets! Schools not prisons!””” and participated in demonstrations wearing orange jumpsuits and graduation caps and gowns to show how the city’s daytime curfew law criminalized students for minor infractions.

Before noon on Feb. 22, their demands were satisfied. The L.A. City Council unanimously voted to limit high fines for students who were late to school.

Student organizers, including a number of student leaders from Boyle Heights, have been at the forefront of this political victory. They’ve kept up with every report, directive and policy change on truancy, and have made it their responsibility to distribute information around the community. Although many of them will graduate this year and won’t benefit from the new law, they say it’s an important cause that will affect their younger siblings and their peers.

“This is the victory for our communities who have struggled to pay for these fines,” said Roosevelt High senior Cinthia Gonzales, who was present at the city council hearing last month. “It’s about time we go rid of a law that criminalizes students who are late.” (Gonzales, a reporter with Boyle Heights Beat, also is one of the main organizers of the student campaign.)

Under the original truancy law, students were fined $250 for being out of class. Along with court fees, the total bill to a student could exceed $800. Critics say the zero tolerance approach, which aimed to increase student attendance, punished students who, in spite of being late, were trying to get to school. Students were forced to miss more school time to appear in court. Fines placed a financial burden on many low-income families.

The new amendment prevents police from issuing tickets during the first hour of school to students who are within a three-block radius of their campus. Community service will be assigned for first and second violations, while only third-time offenders will face a $20 ticket, with a maximum cap of $155.

For students like Gonzales, it meant a great deal to have a chance to witness democracy in action. For years, she saw many of her schoolmates picked up by police, handcuffed and ticketed during truancy/tardy sweeps. “I was tired of the injustices that were committed on my peers,” said Gonzales. But it was the disproportionate statistics that compelled her to get involved.

According to a report by the American Civil Liberties Union of Southern California, Public Counsel Law Center and Community Rights Campaign, between 2004 and 2009, police issued 47,000 truancy tickets””88 percent of them were given to Blacks and Latinos, who represent 74 percent of the student body.

Rosa Solache was one of them. Now a junior at Roosevelt, Solache remembers the high price she paid for missing the bus on her way to school back in 2009.

“The bus passed me by because it was overcrowded,” she said. “Other people at school saw me get into the cop car and I felt like a criminal.”

Solache had to miss a day of school, and her mother a day of work, to go to court after she was issued a truancy ticket. “I cried,” said Solache’s mother, Gemina Valdestino when her daughter told her the news. Today, Valdestino is still paying off the ticket and continues to blame herself for not being able to take her daughter to school. “It’s something really frustrating to know your child was put in a police car for being a few minutes late.”

This year, Solache joined Gonzales and other students in the effort to amend the truancy law. Like Gonzales, Solache also serves as a staff writer for Boyle Heights Beat.

As part of Taking Action, a club at Roosevelt led by the Community Rights Campaign, students learn about the political process and strategize about building a campaign. They participate in community meetings and organize petitions, protests and press conferences with support from the American Civil Liberties Union of Southern California and Public Counsel Law Center. 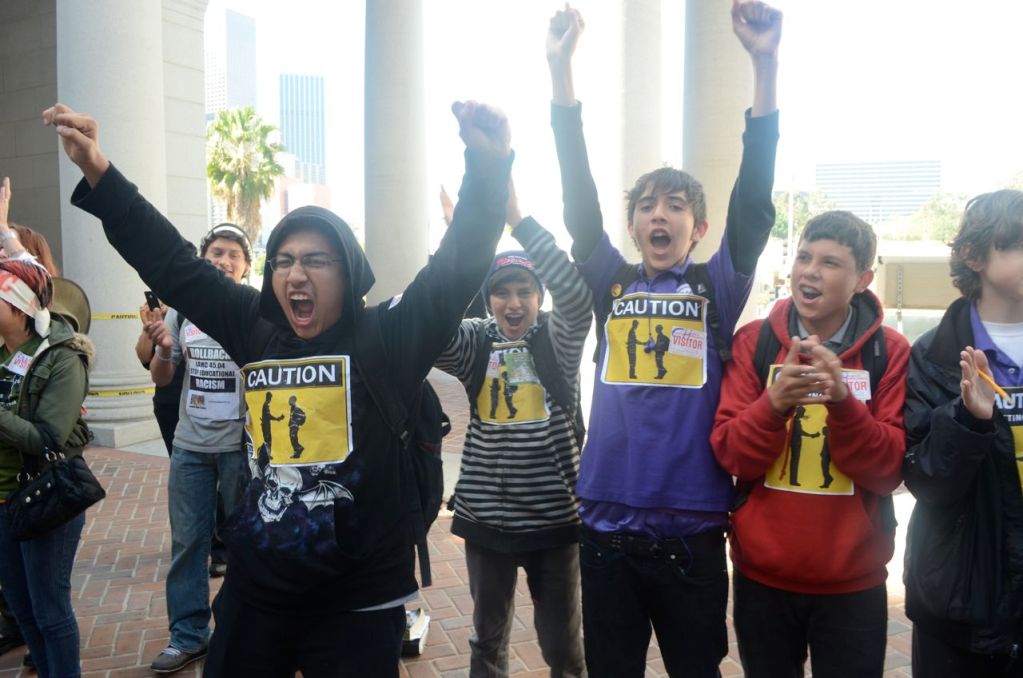 For years, truancy has been a major problem in Los Angeles County. According to data compiled by the California Department of Education, nearly three out of 10 public school students in L.A. County’s 81 districts were classified as truant in the 2009-10 school year. But some have taken a more holistic approach in dealing with the situation, focusing on examining why students are late rather than criminalizing them.

Los Angeles Councilman Tony Cárdenas, who proposed the recently approved amendment, has been working to reform the city’s student truancy policy for over two years. Cárdenas says schools and the community should address attendance problems not the police and courts. After Cárdenas worked with the Los Angeles Police Department and the Los Angeles School Police Department, the two agencies issued new truancy policies last year. Support built from there.

Recently, the countywide School Attendance Task Force, chaired by Nash, released a report based on a year-long study and asked the Education Coordinating Council to adopt a “comprehensive approach” to the truancy issue. Like the new amendment, the report recommended alternatives such as mentoring and other services for at-risk youth instead of involving law enforcement.

“This is a better way of dealing with the root of the problem,” said Gonzales.

At last month’s council meeting both Gonzales and Solache were among the students who spoke before the council, criticizing the effects of the current law.

“Most of the students have never set foot inside a city council [meeting]”¦They became part of the political process and they learned they have the power to change laws,” said Roosevelt High School teacher Jorge Lopez, one of the club’s sponsors. “It was eye-opening to a lot of them”¦ very powerful.”

“It’s motivating to know that you have the power to change something,” said Solache.