Her concerns were bigger than just trying to pass her classes and study for exams.  She had to worry about having a safe place to sleep or food to eat.

“I had people who were nice enough to let me sleep in their offices at school,” says the 23-year-old student.  “Some offices had Cup of Noodles, but that was not healthy, and that doesn’t really feed you.”

Cortez is not the only student facing these problems.  A Los Angeles Community College District survey of 5,925 community college students in the county found one in five was homeless.  In addition, 38 percent reported very low food security, compared with 33 percent of community college surveyed nationwide by the Wisconsin HOPE Lab and the Association of Community College Trustees.

In Los Angeles, many homeless community college students are former foster youth who have aged out of the system. Others struggle with being unable to afford to pay high rents. Lack of stable housing and food insecurity affect the students’ performances in school.

Jóvenes Inc., a local non-profit, has worked with homeless youth for the last decade. It is now teaming up with Los Angeles community colleges to identify homeless students and help house them to make it easier to stay in school.

Even before the district survey was published, Jóvenes’ development director, Eric Hubbard, says the organization was working with community colleges to help. It began as a partnership with East Los Angeles Community College (ELAC) and Los Angeles Trade Tech for college tours to help inspire youth to attend college, but grew once counselors asked Jóvenes for help housing homeless students. 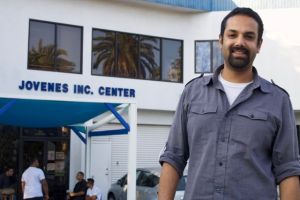 Hubbard says Jóvenes knew it had to do something to deal with the severity of the problem. “Amongst the former foster youth that are going to community college, only two to five percent are actually graduating. So many of them are struggling with things outside of campus that are getting in their way of really achieving their dreams,” says Hubbard.

“Every student that came in, every student I saw, comes in very hopeless, literally in tears, feeling like they have no future, there’s no hope,” adds Abel Lara, an assistant career counselor at ELAC.

Cortez has struggled throughout her life with unstable housing. She ran away from her adoptive mother, whom she describes as abusive, three times before entering the foster system at age 13. Soon after, she fell into drug and alcohol use and homelessness.  She often slept on friends’ couches or in parking garages.

She says a guard was nice enough to give her his jacket when she was sleeping in a parking structure when she was a young teenager. “I was one person, and he could hide me,” says Cortez. “I was lucky.  The guard was like an angel.”

She lived with various foster families before aging out of the foster care system at age 21, which meant she had to begin to house herself and pay for her meals. A friend told her that if she went to college, Cortez could apply for financial aid and use that money for housing or food. She says she knew she wanted a better life and thought this might help her achieve it.

After being identified as homeless by college counselors, Cortez got help from a program Jóvenes launched last year called the College Success Initiative. Jóvenes works with seven different community colleges to help students find jobs and affordable housing and to start becoming more independent. Since last March 24 students have participated, and 90 percent have stayed in school.

For Cortez, having a place to call home made the difference in her success. When she received the key to her first place, a rented room in a house, she was ecstatic. “I never had a key,” she says. 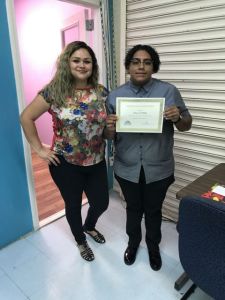 While in foster care, she says she wasn’t allowed inside until the foster parents returned home.  “I always had to wait near the fast food place for my foster parents to come home because they did not want us to make their house look bad,” says Cortez.

Now that she has a place to call her own, Cortez has improved her grades. “When I was homeless, I had D’s and F’s, but now with the help of Jóvenes, I have C’s and B’s, and I am aiming for A’s.”

Cortez is grateful for the help she’s received and wants to give back. Having felt deprived as a youth, she now wants to help others who are disadvantaged.  She volunteers at the Cooperating Agencies Foster Youth Educational Support Program (CAFYES) at ELAC, which helps other students like her.

Next year she hopes to transfer to a four-year university and also get a certificate in American Sign Language. She wants to serve the deaf community because she believes the deaf, like youth in foster care, are also often ignored. “Anyone can lose their hearing, and we are not learning this language because it is not seen as a positive thing in our culture,” she says.

Her other goals are to “find better housing, get a better job and just be happy.”