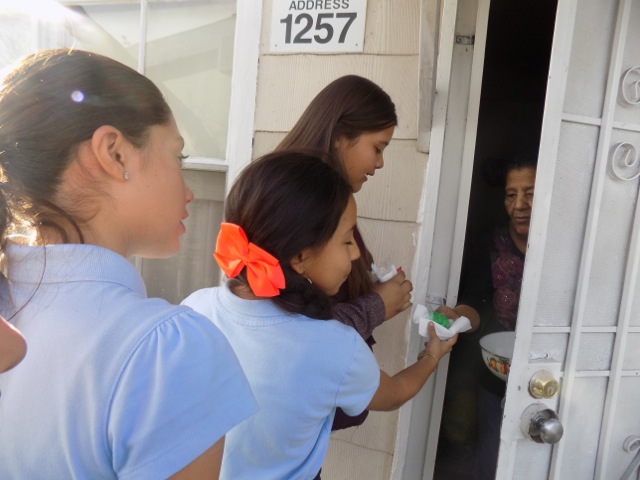 On a hot afternoon in Estrada Courts, kids laugh and push each other out of the way to be the first in line outside an apartment of an elderly woman. Waiting eagerly with quarters in hand, the elementary school children yell and knock on the door. “Doña Celia!” they yell. “Ahí voy!,” she answers. For the past 35 years, Paz has been a fixture in the housing project. Originally from El Salvador, she shares one of her home country’s traditional treats with the children in her adopted community: “hielitos,” flavored ices that she makes and sells from her one-bedroom apartment. They’re called “charamuscas” in El Salvador and are popular there with children.

Paz packs each in a plastic bag and sells them for 25 cents. “I thought of doing the hielitos because in my country I sold them,” says Paz. “A lot of people sold them. My neighbor also sold the charamuscas and frozen bananas.”

Ice cream trucks don’t pass through Estrada Courts, the 414-unit housing complex located in Boyle Heights. In the low-income complex, where most kids can’t afford $3 ice creams, hielitos provide a low-cost alternative on a hot day. Children buy their ice treats either before or during a break from after-school programs at the Boys and Girls Club in the complex. Kids often take turns buying each other the treat. “The first time I came to the Club, I didn’t know about Celia’s, but then my friend had mentioned that they were selling hielitos, so she’s like, “Here, I have a quarter. I’ll go buy you one,” says 10-year-old Aída Gopar.

Paz sells around seven different flavored ices on a given day, but says chocolate is the best seller. Other flavors include lemon, vanilla, bubble gum and watermelon. She says she only uses bottled syrup for the bubble gum-flavored hielitos. For the rest, she uses, sugar, water and natural flavors or fruit.

“What I like about the hielitos is that the lady doesn’t have just one flavor. She has many kinds,” says Hasley Hernández, 11.

Friday is generally her big selling day. She makes trips to the store on Wednesdays to buy ingredients so she has enough hielitos ready.  She uses her pension money to buy the ingredients.

Longtime customers have fond memories of Paz and the frozen treats. Seventeen-year-old Leslie Bojorges, a longtime resident of Estrada Courts, says, “Celia is like an aunt to us.  She’s always happy to give us hielitos.”

Bojorges says Doña Celia is never upset about the kids interrupting her. “She’s always happy to see us, and after awhile of not going, she asks where and how we have been,” Bojorges says.

Paz raised six children, but now that they are grown, she lives alone. One daughter lives nearby and visits often. Paz says she doesn’t really have a lot of friends in Estrada Courts, and her closest friend recently died. She keeps selling for the interaction with the children.

“I just sell for fun.  I don’t make any money doing it,” says Paz.  “I spend my time alone, and the children come, and I have fun.”

The connection to the children is so meaningful for her that she gets choked up thinking about the warmer months, when there is often a line winding outside her door. For the kids, Paz is much more than a woman selling ices.

“Life without Celia would make the neighborhood kind of lonely to me,” says Bojorges.

All photos by Guadalupe Félix.

Guadalupe Félix is a junior at Felícitas y Gonzalo Méndez High School. She plans on continuing her education and hopes to attend a four-year university away from home. Her hobbies include listening to music, going out, and hanging out with her friends.